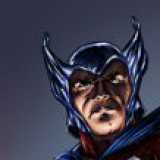 Powers: Flight (Capable of lasting outside the earth's atmosphere for at least an hour), Super Strength, (Able to lift roughly 500 tons) Fire Breath, (600 degrees limit), Hypnosis (More specifically able to coerce the truth out of someone by keeping total eye contact with them), Able to breath under water, Super Hearing (able to hear things from 40 miles away), Photographic memory, (able to memorise even the tiniest details about a person) Almost invulnerable, Super speed. (Able to fly at up to 100 miles per hour top)

Weaknesses:Despite his numerous powers, John is still weak to certain things. Religious symbols (specifically Christian ones) tend to cut out half of his power and prolonged exposure will drain him for a full hour with him slowly recharging. Most forms of light magic also weaken him and his ability to breath underwater will rob him of his ability to breath fire. Whats more his stamina needs to be recharged with food, water and sleep like everyone else. Lastly his powers of Hypnosis can easily be broken if he fails to keep eye contact with the victim.

Brief Origin:The origin and beginning of the Superhuman known as John Q. Public are sketchy to most people. What most people can never know is that he was born in Alaska in a town that is now no longer considered to have ever existed. This is because at the age of two, he threw a temper tantrum that saw the town go up in flames. Shortly afterwards, the American government stepped in grabbed the child and erased both the legal existence of both the town and the the boy. In a secret government testing centre somewhere in Hawaii, they made several scientific attempts to pinpoint an origin for the boys powers. When their efforts proved futile, they kidnapped and enlisted the help of a local psychic. After observing the child, the psychic turned to the generals and scientists in the room with a look of pure horror on her face and told them the truth. Her visions saw the boy (now grown up and elderly) destroying entire cities while being crowned ruler of the world while all water turned to blood and entire nations were swallowed up by the sea. unable to handle the madness, The psychic collapsed on the floor. Before she was rendered completely insane, she told them that she believed the child to be none other than The Anti Christ of Biblical Mythology. Prophesied to signal Armageddon. After this, the now insane Medium was looked away in a government holding cell for the rest of her life.

Only a select few in that room believed the woman's story. The rest saw the child as a blessing and that the woman had clearly been insane to begin with. For years after this, the boy was raised under several ''parents'' while living with both the US Military and Government scientists, under the codename ''Project American Dream'' or ''John'' as he was also known. During the next 22 years, They raised the boy, placing him in virtual reality in order to provide him with a childhood, raising him in the restored town that he'd destroyed as a child with fake parents, fake friends and a fake identity. John Hoover. Even in this virtual reality his powers seemed to manifest themselves. To ensure that ''Project: American-Dream'' would go unaffected by anything, they created a Superhero in this world known as ''The Crucible'' He was called this because his skin and muscle tissue was made of metal and would catch fire at times of great fury. His origin was that he was a ex criminal called ''Dwight Eugene'' who had tried to escape in a barrel of lye from the police and had been skinned alive when the lye had gone into his pours. A local scientist had developed a new kind of liquid metal which he intended to use to replace otherwise unhealable skin. Dwight became his test subject and he was able to replace both the skin and the damaged muscles. When Dwight had woken up he'd found himself able to lift 20 times his own weight, he could leap one sixth of a mile and that seemingly nothing could damage him. Shortly afterwards a group of hitmen hired by a rival scientist came into the lab and killing the scientist. Dwight fought them off (and at the same time revealed his fire powers) before brining the rival scientist to justice. After this, inspired by the scientist who had saved his life, Dwight had taken a vow to fight all crime within the town and the state. John idolised The Crucible and hoped to become like him some day. His powers were still out of controll in some cases and the scientists programmed an ''off month'' for the towns hero. On this moth with no crime for his hero to fight, John met The Crucible in his laboratory and showed him his powers. The hero gladly trained the boy in the use of them for that month, but told him to only use them after he was gone. John was disappointed, but never asked why. In reality The Crucible could only have been the product of the scientists of the government. Especially since the town had a rather 1950's-esc view of patriotism. Not to mention a 50s-esc way of talking and acting. John grew up to love the history of his country and the freedom which it possessed. In time they programmed these virtues into the boy and programmed his parents to tell him that the reason for his powers was that he'd been left on their doorstep by Uncle Sam himself, the reason for his weakness to Christian symbols was that the devil, seeing the boys future had cursed him.

Things went on that way for years, with John slowly coming to terms with the fact that the world outside his home town wasn't as nice or as kind a place. This the scientists hoped would ease John into the real world when they finally brought him into it. There were no whistleblowers because everyone knew the risks of telling John the truth. This charade went on until John's 25th birthday. By now John was working in his virtual father's garage repairing cars. The scientists knew that all their hard work had payed off. Now all that was needed was to bring the boy to the real world without attracting his suspicion. Many had been planning how to do this for some time, but knew On his 25th, John was planning on helping his dad with The Mayor's new Cadillac when a fight erupted in the town square between The Crucible and his long time nemesis, Count Glacier. Glacier had ice powers and was said to be the only person capable of destroying The Crusible. The scientists had made Glacier the leader of a Norwegian terrorist group who sought to bring the the world back to the old Norse religion. It (they hoped) would be enough to satisfy the curiosity of the young boy now a young man.

The battle continued for two hours before The count lay on his back seemingly defeated. As the Crucible went to grab him however, The count pulled a small remote from his pocket and pushing a small button, he announced that a missile would destroy the town and everyone in it in the next half hour.

Panic gripped the town as people began to rush to their cars in order to escape, but the scientists had programmed each car to stall. Unable to get themselves out of town, John's parents quickly ordered him to leave on his own. With no choice the boy flew for his life until he was as far away from the town as possible. Then, from a spot in the hills he watched as the town he had come to know was destroyed in front of him. For the 1st time, The Crucible had failed. John flew back to the town with tears in his eyes, but all he found was a crater. And all that was left of The Crucible was a severed head. This was when he was found by a group of American scientists who comforted the boy and told him that sadly that the warhead that had been dropped on the town was an experimental missile made by the count's terrorist group that had the power to wipe anything it destroyed from existence. In other words, the town that he had loved, been born in and grew up in, his friends, his family. The rest of the world would soon forget them. They also mentioned the John's powers, saying that he would be the only one unaffected by the blast. Before John could ask why, he was whisked off to a government research facility in the Nevada desert. In real life this was also where the research facility where John had spent 13 years of his life resided. Once inside the building, John was told to lie on a table. The virtual scientists told John that this was in order to scan him to give them readings of his powers. In reality the helmet they'd slipped on his head was the virtual reality helmet the scientists had slipped onto him as a child. Once they slipped off the helmet after the ''scan'', John unwittingly found himself in the real world for the 1st time since he was 2 years old.

He was brought to President Anthony Stark. The latest in a line of presidents who had been tasked to oversee the operation. He asked John if he was ready to use these powers for the good of the people. John, still remembering the sacrifice of The Crucible agreed to. He was, to this end, issued with a costume that the president told him would inspire the country to heroic deeds. All John had to do was commit those deeds in the costume. Finally, Stark issued John with a name that he said would double the inspiration of his deeds 100 fold. A name that he said would signify all the good in america.

The rest, is current events and John (still working with the government) still has yet to learn the truth...for now.

(So this is John Q. Public. I hope for him to be a Superman Homage since the site seems to be lacking in one. If you have any questions or complaints about the character, feel free to post them here.)