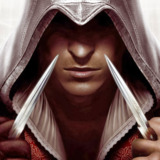 Born as an aristocrat in Florence during the height of Renaissance Italy, Leonardo Da Firenze was groomed from birth to master the ancient techniques of his family to become a Master Assassin and shape the future of the world through systemic elimination of key figures of his period. Trained from the age of eleven, Leon's mutation made it effortless for him to master all the techniques his father had taught him and immediately embarked on the quest to kill the corrupt figures of Italy and shape a better world. Out of fear of the world class assassin, Leon's enemies had orchestrated the elaborate death of his family, further fuelling his motivation to end corruption, as he wiped out names of a list.

When all was done, Leon hung up his robes and grieved, having nothing more to do, he was approached by the brotherhood of the future, The Wanderers, who offered him a position among their family in exchange for his talents. Leaving Renaissance Italy behind, Leon embarked on his next great and dangerous quest.

Umbrakinesis: When Prodigy's mutant abilities manifested, his predominant ability revealed itself as the control of Darkness, both as a solid substance and an absence of light. Through manipulation of darkness, Prodigy has mastered various effects which he can summon to assist him in his objectives. The applications of this power include:

Shadow Absorption: Prodigy can absorb shadows, and by removing the absence of light, he can allow brightness to manifest in places where it would not otherwise be. The absorption of shadows also empowers Prodigy, healing him and returning his vigour to a renewed state.

Shadow Camouflage: Prodigy can camouflage himself in areas of darkness, becoming completely invisible even to the aided eye.

Night Vision: Prodigy can see in absolute darkness as if it were clearly day.

Umbrakinetic Constructs: Prodigy can generate constructs composed of darkness, of varying size and density. After generating these constructs, Prodigy has complete, including telekinetic control over them. These constructs may have defensive (armor), offensive (weapons) and other applications (restraints).

Umbrageous teleportation: Prodigy can teleport from one point of complete darkness to another.

Combat Aptitude: Prodigy possesses the ability to immediately understand and master any ability he has seen being used, and replicate it perfectly

Enhanced Agility: Naturally born with hyperflexible bodily tissues, Prodigy is 3x more agile than a normal human, and is therefore able to perform acrobatic feats of agility which easily surpass any olympian who has ever competed.