The Meaning of Man

And finally the great journey is over, a journey that consisted mostly of sidetracks and flashbacks and social commentary and religious antagonism. But first ... another mostly ancillary flashback whose main purpose was to give us more reasons to feel sorry for Amy. Following this, Jesse Custer diddles around (like he has been doing most of this series) learning basically what we knew about Cassidy all along: he's selfish, reckless, and people get hurt by him even when he doesn't mean it. Meanwhile, Starr continues to be the only mildly interesting aspect of the series, but for no particular reason he is given another nemesis resulting in more dismemberment. Other characters at least get some nice closure, which I suppose proves the world is truly a good place after all and mankind is swell.

When the series finally gets to its conclusion, our heroes prove once again they are all fairly mean-spirited, selfish beings who want to solve all their problems with fists and guns. Somehow this makes them better than God. Jesse Custer has been mad at God the whole time because He "ran away" from His problems. Jesse Custer showed his superiority to God by ... spending most of the series running away from his problems. Meanwhile, Starr wraps up pretty much all of his loose ends (and everyone else's), and there's no more worry about the Grail.

In the end, despite what Jesse and everyone have been saying this entire time, the only character who has been true to His word the entire time is ... God. He does everything He says He will do (not counting those nonsensical empty threats) and enables everyone to have a much better life than if He had not directly involved Himself in their lives. So I got the impression this series refutes itself rather wholly, but I must be wrong about that. Where we leave off, mankind is going to be wholly responsible for everything that happens to him - and considering who is left in the world, with no organizations trying to make the world a safe, guided, organized place, the world is in pretty big trouble. But this series wants us to think man is great, swell, and better off without anything supernatural. What happens to Genesis? Doesn't matter, apparently. No more supernatural exists (except for all the demons without a leader, but mankind will be fine, we're told). What does it mean to be a man? If our heroes are anything to go by ... oh, boy.

Other reviews for Preacher #6 - Book Six 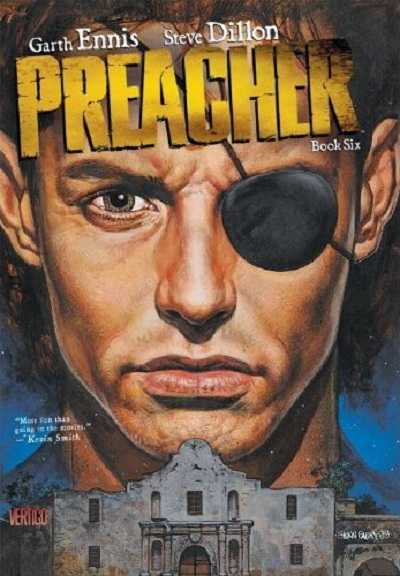