I really want to like Power Girl. I really do. She has such potential. She's a powerful woman, with an iconic look, and not some knockoff of another super-hero. (Yes, I know she is, but at least she doesn't have a big "S" on her chest). However, whether it's because of her muddled backstory or the fact that most writers find it hard to write for a strong, independent woman, I always find her stories wanting. When she's in a super-hero team, she's either written as A) the bitch or B) the slut. Now, don't get me wrong... there are some really good Power Girl stories out there.

This isn't one of them.

This series feels like it's just trying too hard. It's trying to flesh out Power Girl's new origin as an Atlantean, introduce an arch-enemy that was an old for of her new grandfather Arion (the Weaver), and introduce more supporting characters that you can shake a stick at (her co-workers at Starrware, a bad-guy board member trying to take over majority stock of Starrware, four roommates, a DoJ agent, and a karate instructor!) There are so many inconsequential plotlines that come up (the corporate takeover of Starrware, one roommate trying to set Power Girl up with a date) that just seem to be abandoned by the end of the miniseries.

I just kept getting distracted by middling questions. Why does Force not disappear like the other villains Power Girl fights? Why does a CEO of a decently big software company live in an apartment with four other people? Why did the Weaver decide to attack Power Girl now instead of years ago? What the hell is up with the talking cat? Power Girl has a brother?!?!? When someone gets so preoccupied by little questions instead of caring about the plot, then there's a problem.

There are some good things in here: call-outs to the Arion, Lord of Atlantis series made me nostalgic; the covers by Dick Giordano and Kerry Gammill are awesome; and the ending tone, with Phantom Stranger warning Power Girl about the coming war between the Lords of Order and Chaos, was nice and ominous.

The big thing that saves this series is the fact that there is some character development. Power Girl has started to come to terms with not being a Kryptonian. A shame that character development was rendered moot in today's continuity. If you really like Power Girl or Arion, Lord of Atlantis, and see this series for a 50 cents a piece, I'd say pick it up. If not, then pass.

Other reviews for Power Girl #1 - Threads!

This issue opens with Power Girl flying to her office in New York City. he is running late for a meeting at her software firm due to a court appointment. When she arrives she finds outthat her partner has been talking to outside parties about a buy out.   This throws her into a tizzy and has her thinking of her own identity. How she thought she was a cousin of Superman, but found out that she was in fact the Granddaughter of Arion, an Atlantean mystic who lived 45,000 years ago.    After work sh... 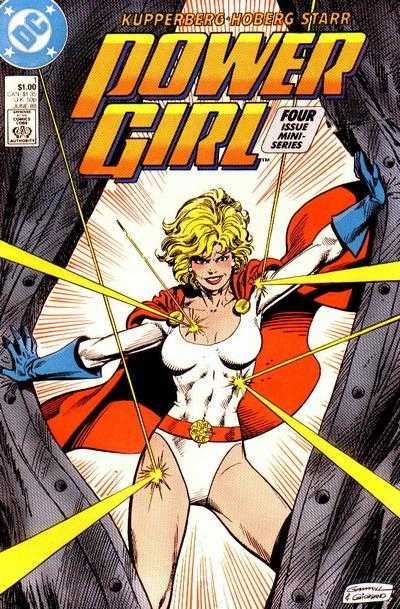