the_mighty_monarch's Nightwing #3 - Past and Present review

Nightwing Flips and Twirls His Way Out of Batman's Shadow

The Good: I absolutely love the cover. Its doesn't immediately strike me as impressively laid out at first, but closer look reveals an amazingly creepy feel in an impressively subtle way. Nightwing sticks out as the most colorful thing in a world of mostly sepia tone, and yet even he is starting to lose his color just a tad. Everyone's got smiling faces, but something's a little off about it all, something's hidden behind their smiling faces. Something dark and evil.
The angles of the images are great, constantly titled in different directions, representing Dick's growing uncertainty and sadness. It also works well with Dick being an acrobat, things are always in motion, rarely is the ground flat in front of him, so we get a good feel for how Dick sees the world when in action.
Things are very tense and emotional. Higgins has done a great job integrating Haly' Circus into this story without making a single bit of it feel forced. He's telling us a story that's impressively unique for Nightwing, and the future of this story is very uncertain, in a very good way.

The Bad: 5 Years ago? NO. JUST. NO. There's now way Dick became Robin 5 years ago. That's complete and utter bullshit. 5 years isn't NEARLY enough room for Dick to like being Robin, slowly grow out of the role, become Nightwing, Batman to find Jason, grow attached, have him get killed, grow dark and distant, Tim to stumble upon him, find Jean Paul Valley and have HIM take over as Batman after Bane breaks him, have Tim long enough to grow attached... YOU SEE THE PROBLEM HERE!? Plus something's odd about Dick being Robin when he's already a teenager. He wouldn't be as broken and vulnerable just 5 years ago. It juts doesn't work.
Having a 'See Issue #1' is kind of dumb only 3 issues in. How many people will jump in at #3 without getting #1 and #2? The whole point was to have everyone jump in at the new #1's and #3 isn't too far in.
Although the panel layouts in the scene are fantastic, I don't like the addition of the more sci-fi elements. I get tat there's lots of technology in the DCU, but in a story the likes of which we've had so far it just feels out of place. It could be because it reminds me heavily of Deus Ex, which I've been playing a lot of lately, and that's clearly meant to feel very futuristic.

In Conclusion: 4/5
There's not a lot for me to say about this issue. Higgins has made a damn good mysterious series that doesn't have to be dark and cold in a Batman way. He really writes a Nightwing who can stand on his own 2 feet as a character, with a feel unlike Batman. A feel that is unequivicolly 'Nightwing.' it's not without its flaws, but the overall presentation has been at a very constant 4/5, which is still damn fine, and interestingly consistent.

Other reviews for Nightwing #3 - Past and Present

Last issue was an amazing one that we got to see people for Dick Grayson's past come back into his life. Now we get to see what was happened before and what is happening now.   THE GOOD: The art is really good. It captures motion and emotion very well and I think that they have the perfect artist on this series because it gives it a tone and keeps it throughout the story. The story is really what got me liking this though. We get to see Dick Grayson before he was taken in by Bruce Wayne and befo...

The Story: Dick Grayson attends My. Haly's funeral, attempts to patch things up with Raya and pays a visit to his old friend Zane.  My Thoughts:Nightwing has been a series I hadn't expected to be this good. So far I've been thrilled with where the story is heading. I think Kyle Higgin's work here is far superior to what he's doing on Deathstroke. Everything in this series serves a purpose. The exploration of Haly's Circus is what intrigues me most. I hope Higgins continues to dig deeper and desi... 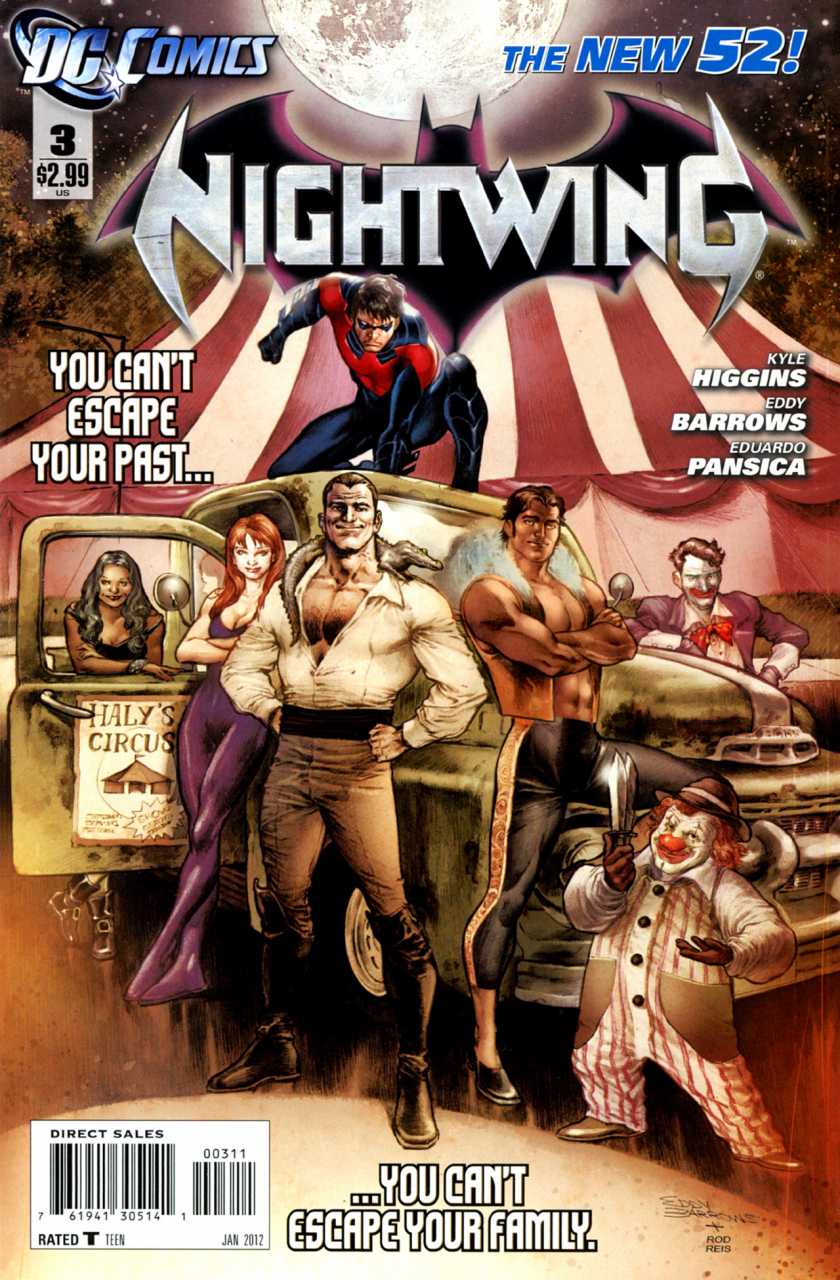