batwatch's Nightwing #14 - Die for Me review

Nightwing has been a solid book all throughout the DCNU. Last month, readers got their first glimpse of the new creative team with the new writer Tom DeFalco. DeFalco’s first story brought mixed responses from fans with many feeling that his story meandered without any solid focus, but I rather enjoyed DeFalco’s pacing as he gave due time to all the different aspects of Nightwing’s life. The focus for this month’s issue should be solidly on Lady Shiva, the assassin known as scourge of the underworld. No doubt this month, Nightwing and Shiva will come to blows. Do sparks fly at their reunion, or is their battle have no passion?

In this issue, Nightwing looks for leads on Lady Shiva, checks up on Amusement Mile, finds out why Sonia Zucco missed their date, and does battle with Lady Shiva.

The Lady Is a Tramp

I’m sad to say that Nightwing’s battle with Lady Shiva, which took up more than half the issue, left me a tad disappointed. Previously, Lady Shiva always fought for her own personal honor, but in the past two issues, it appeared that the reboot had changed her into a vengeful slayer of criminals based on her actions and the scuttlebutt among the underworld. This is a much more generic motivation, but I could probably get used to the idea. (Spoiler) This issue changed things once more as it was revealed that Lady Shiva actually fights for the noble cause of money. Freaking money! Oh how original. (Spoiler)

Along with her motivation being unclear, her target was a bit mysterious as well. Nightwing fights her for many pages, yet readers are not even sure what they are fighting over. In fact, Lady Shiva could have completed her contract quite easily without ever having faced Nightwing, but I suppose she probably wanted to toy with him.

As far as the battle itself, it was pretty entertaining. Though I am disappointed in her rebooted motivations, I can make no complaints about Lady Shiva’s rebooted lethality. She is as deadly as ever. In addition to her hands, feet, and hair spikes, Lady Shiva brings two scythes/flails into battle. Her twisting style of fighting makes her a virtual tornado of unrelenting attacks. I do hope that in future appearances, Lady Shiva does not rely exclusively on these weapons for it is much more impressive for her to be a living lethal weapon without the crutch of tools, but for a one time fight scene, it was pretty awesome.

My one complaint about the scythe flails is that Shiva throws one of them scythe first in the battle, and that does not make any sense. The scythe could not possibly have enough mass to send the flail trailing after it. If someone tried that move in real life, it would end very awkwardly.

Nightwing’s detective skills could use some work in this issue. He wonders if Joker might be behind Lady Shiva’s assassinations, but then he dismisses the idea because it is completely out of character for Joker and makes no sense as a motivation for him. Despite his initial dismissal, Nightwing questions Lady Shiva about it during their fight. Clearly, the creative team just wanted to remind readers that “Death of a Family” was still going on, but I do not think anybody really needed the reminder.

In the end, the person who was responsible for Lady Shiva’s attack was revealed, and I think that this person’s scheming did make sense and was a strong resolution for the story.

Amusement Mile is still the aspect of this current run that holds most of my attention. I think it is an excellent project for Dick, and I am curious to see how it develops. It appears as if DeFalco is adding more supporting character around Amusement Mile, and I hope there will be a lot more action happening there in the future. I suspect that Haly’s Circus, which was said to be opening soon, will attract the attention of a certain rogue clown next month.

This story was pretty good, but it felt like it was rushed to make room for Death of a Family, and the physical battle between Lady Shiva and Nightwing did not carry very much weight since we did not understand Lady Shiva’s motivations or target, but still, this is a pretty good issue which delivers a decent plot and a solid action scene. Nightwing fans will not be disappointed.

For more news, reviews, and commentary for the entire Bat Family, check out BatWatch.

Other reviews for Nightwing #14 - Die for Me

I have been enjoying this series and with Dick Grayson being one of my favourite characters it's nice to see him have a good series, especially one where he's Nightwing the persona I prefer him as. I have been happy with the work Kyle Higgins has been doing with this series and although Tom DeFalco has done a decent job on this issue and the last I will be happy to see Higgins return next issue.PlotThis issue sees Nightwing continue his fight with the gang of thugs he was facing last issue. Afte...

That Girl's a Superfreak 0

This issue seriously has a dull cover. It's trying way too hard to be cool, especially with the rain. Nightwing and Lady Shiva are just taking up way too much space, and their fight poses are kind of awkward and static. Plus there's no background. It just looks so bland.Andres Guinaldo delivers some very nice artwork, bright colors and dynamic movement. A couple of the panels in the Lady Shiva fight are really really awesome. The only downside to Guinaldo over Barrows is that Guinaldo uses tradi... 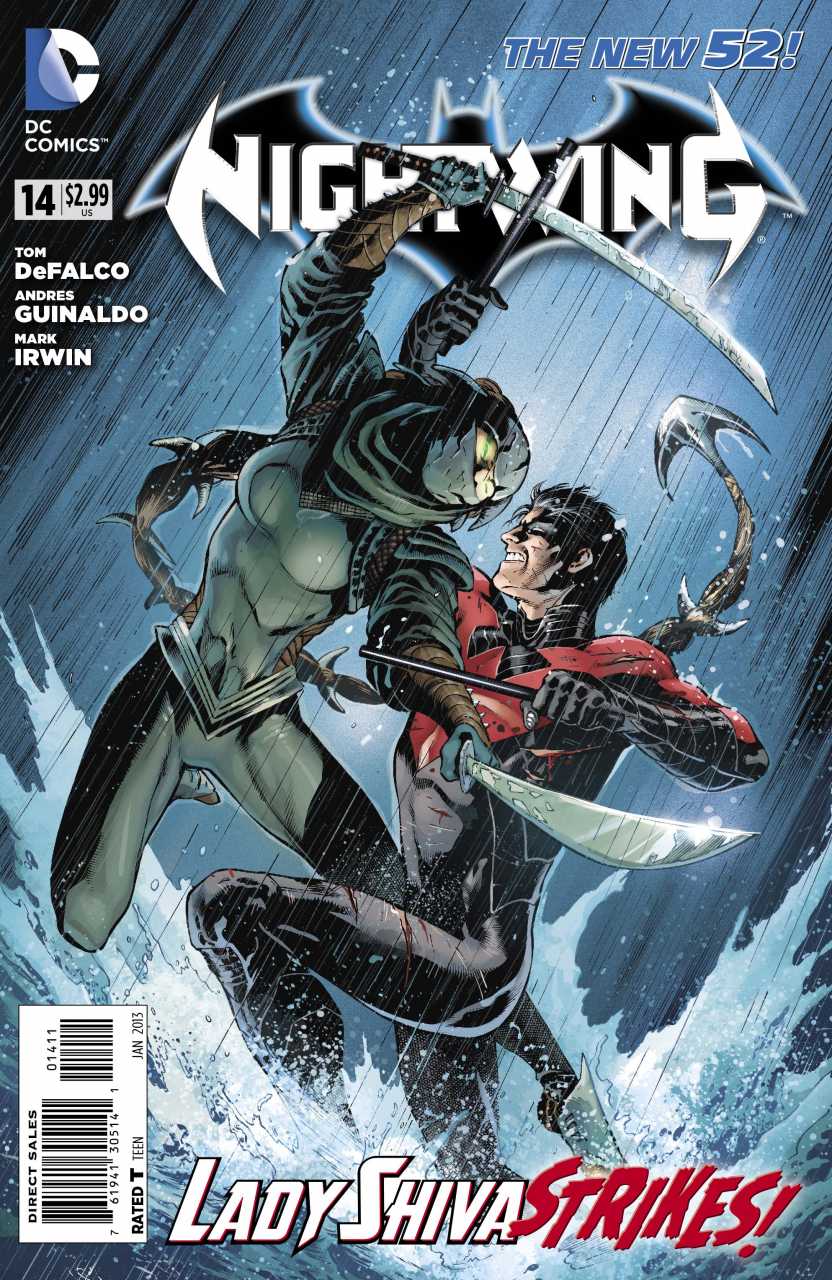