The first step is always the hardest

Now this is the Chris Claremont I know and love!

The story is a simple one, on the surface. Nightcrawler is a man looking for his place in the world he thought he'd left behind forever. He's back now and has found it's not quite so easy to go home again, nor is he the man he once was. This was brought home regarding his personal life with the highly nostalgic first arc of the series, and this issue has him taking the first tentative steps towards his new life.

This issue starts, however, with him looking back at his friends and "family," the X-Men, and how much things have changed. Claremont comments succinctly on the new status quo of the franchise and seems to give voice to the thoughts of many readers. Kurt's grief for what once was, that will never be again, is our own. The line, "stupid game," was a solid emotional sucker punch, especially for long time readers. But then Mr. Claremont was nice enough to pick us up and dust us off, bringing a ray of hope with the sunrise in the form of an old friend. Kurt's conscious decision to embrace the future and hope again reminds readers why he is who he is -- the heart of the X-Men -- and why he matters so much to them as well as the audience.

Nightcrawler goes on in the issue to face something far more fearful than savage aliens or technological terrors -- he faces his first day on the job as a high school teacher.

There's cute series of panels with the bamfs helping him get ready that made me chuckle out loud.

He spends the workday alongside Rachel for observation purposes to determine what he feels like he could bring to the teaching staff. There are some lovely character moments between the two reminiscent of their close friendship in Excalibur and an artistic wink and nod to a now classic Kurt and Rachel scene of the past.

Claremont reminds us again how much of a master he is in working with new and younger characters via Rico, a scorpion-like young student of the JGS who begins to look to Kurt as a type of mentor figure. There's a touching conversation between the two that hits on what it's like to be so very different looking, even from other mutants. There are also some great scenes with more of the students, and the JGS starts to come alive through Kurt's new(old)-guy point of view.

The classic villainous group of the Crimson Pirates are also reintroduced in the issue, moving into the new arc.

Appearing in this issue

This was an absolutely great read that I highly recommend. It's also an excellent starting point, if you've yet to try out the series.

It's not heavy on the action, rather it's more of a new arc set up and character development issue, and it progresses the overall narrative of the series premise. It also hits the kind of emotional beats I love.

Throughout this issue, Kurt and Claremont himself seem to be almost interchangeable in their perspectives. They're both old familiar faces who've been out of the game for some time and aren't quite sure where they fit into the very changed world of the X-Men. They're both looking at how different the world around them is, while still looking towards the future and trying to find a clear purpose. That business about Kurt not knowing how to win his friends back makes me wonder if Claremont will win the hearts of readers back with this series. I, for one, certainly hope so.

Claremont also effortlessly touches on something that's felt largely brushed under the rug for a long time within the X-Men proper -- exactly what do they hope to accomplish? He starts to answer that question subtly. They're trying to pave the way for a place for mutants to be accepted in the world for who they are. They shouldn't have to be superheroes if they don't want it, they should be able to choose to live their lives as they wish.

Throughout the issue, Nauck's art combines entertaining and moving character moments and eloquent expressions with enough humor to keep the story from feeling too emotionally heavy. He makes especially good use of the bamfs for this. The narrative beats of the writer are clearly backed up and emphasized with the stunning page layouts.

Other reviews for Nightcrawler #5 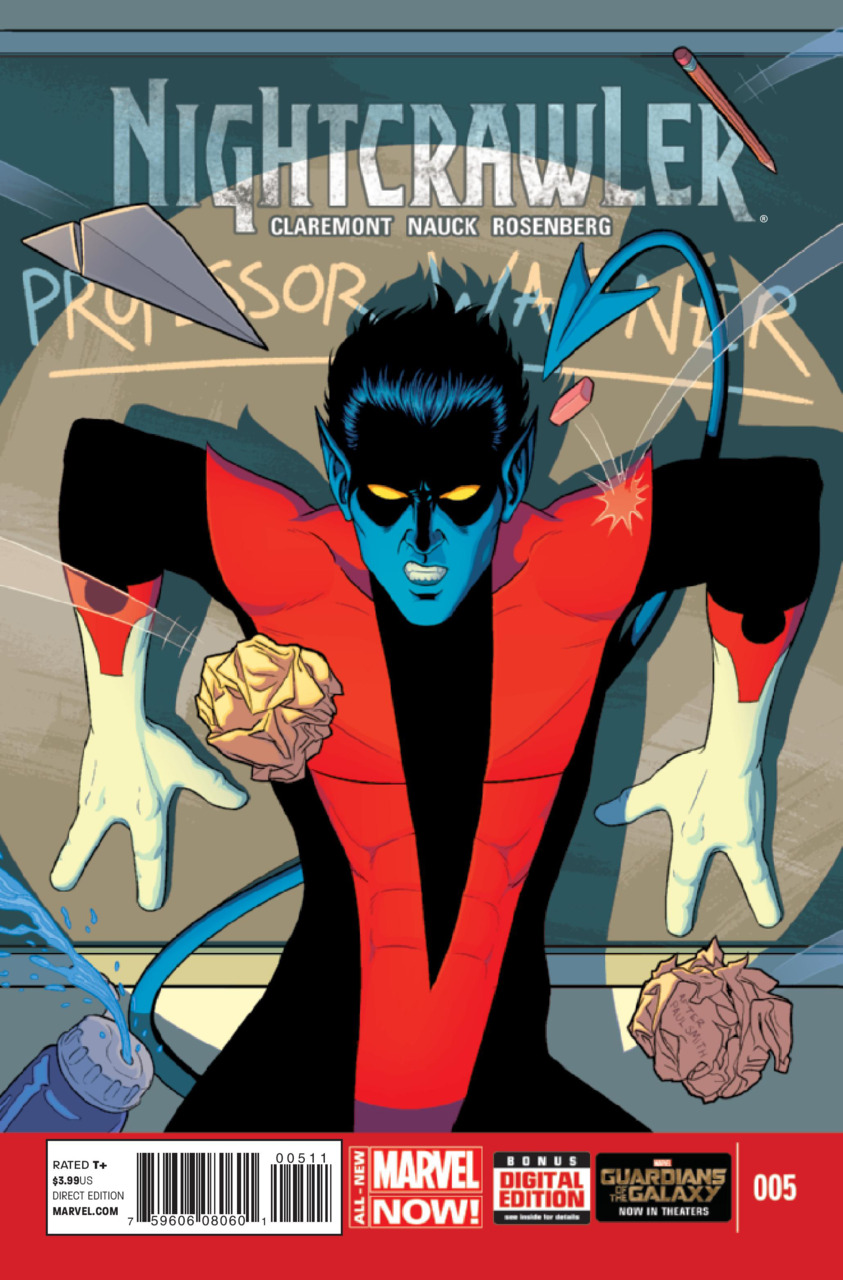