Monsters Under the Bed Have Lives Too

I mean, that alone was enough to sell me on this, to make me seek out back issues in my LCS. Unfortunately they didn't have the first issue of the first series, so I decided to see if I could jump in here without losing anything. The short answer is yes, I could. We're introduced to the Kadmons and their general premise, and we get some little tidbits that help tell us a little more about the world this takes place in. Because, what I gathered from this, is that not only are Adam and Julia Kadmon some sort of 'demon hunters,' but they world they live in is a little more aware of the existence of the supernatural. The Kadmons are more high profile than you'd expect, and that makes a lot of things more uncertain, in a good way.

But I was a little disappointed in this. But I also think that's likely my fault. John Rozum is a man I hold in the highest regard. He is one of about four writers who I respect as god quality writers. He also earned this spot quicker than the rest for me. It took me only two issues of Xombie, the first of both volumes, to realize just how great he is. And so I was expecting to be utterly blown away by this, and while it was definitely really good, it didn't completely blow me away. The dialogue was excellent, extremely natural. The characters are all really interesting, even the little group of demons who you almost feel sorry for, and have an amazingly wide variety of personalities and appearances. The phenomenal facial expressions and the development of the supporting cast. There's so much here to gush about.

But the pacing was a little off. There were a few moments that felt a little rushed, especially the intro scene for the Kadmons. I really wanted to feel something there more than any other scene, and I didn't quite get it. Maybe this was one of the scenes that would work better for someone familiar with them. It was introducing them, but something just didn't feel quite right, and it messed with the overall mood of the rest of the issue.

And in a weird subversion of pacing here, I end by gushing over the cover. Every cover for Midnight, Mass is just so freaking awesome. The interior art is a little dated feeling, but the cover's so damn awesome that every time I look at the issue sitting there I think good things about it. The way its split up into two images, with the Kadmons on the bottom.... the complexity of the smaller bottom image compared to the emptiness of half of the top. The top image split down the middle by a WALL. A wall takes up a huge chunk, and it just has a bloodsplatter and a hand. The whole house would be almost normal if it weren't for the demons, blood, and hand. I just... I want more of anything this artist can do.

To say that this is the worst John Rozum comic I've read speaks volumes, because this was just great. Oh wait, second worst. Xombi #0 was a little off, but it feels like he had his hands tied there. And no matter what, there's never any mistaking John Rozum's touches. His balances Morrison level weirdness with Spencer level characters. I really want to find the beginning of this story because it feels like there's so much to unfold here. 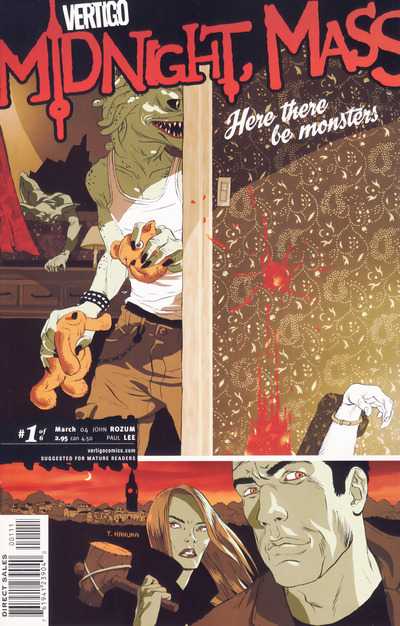