Ladies and gentlemen, we finally return to World’s Collide, last year’s crossover between Mega Man and Sonic the Hedgehog. I’ve already reviewed the first six issues back on the other sight, but since those reviews were sadly not salvaged in the transfer here’s the recap. A series of circumstances brought together Dr. Albert Wily and Doctor Ivo Robotnik. Realizing that they both had a lot in common, they began putting their evil plans into motion. Said plans involve: creating they’re own pocket dimension called the Skull-Egg Zone that looks like it would make M. C. Escher throw up his hands and go “F*ck this, I’m out,” building their own floating death star fortress called the Wily-Egg, systematically kidnapping Sonic’s friends and turning them into powerful machines called the Roboticized Masters, rewriting reality to suit their needs (which was actually just to make this crossover more accessible to those who haven’t been reading along) and finally, forming the greatest evil bromance in the history of the world. Anywho, despite the Docs best efforts to pit Mega Man and Sonic against one another, the two eventually joined forces and entered the Skull Egg Zone to try and save the captured Dr. Light and take down the evil Doctors once and for all. In the last issue, Mega Man had successfully defeated the Roboticized Chaotix, restoring them to their natural forms and gaining new weapons in the process.

Our comic opens with Mega Man, Sonic, Rush and Tails making their way through the hellish landscape of the Skull-Egg Zone, Mega Man and Sonic trying to one-up each other as they go along. However, it’s not long before they’re attacked by a giant robot snake, which they quickly take down and continue their bickering. However, the one-upsmanship is all in good fun as it’s made clear that the Blue Bomber and the Blue Hedgehog are really starting to respect one another. However, they’re soon attacked by Shadow Man and uh… Shadow Man. That is to say, Shadow Man, the enemy from Mega Man 3 and the Roboticized version of Shadow the Hedgehog. After some confusion over which one is actually called Shadow Man, the two heroes take down the bad guys and Mega Man restores Shadow to his former self. Shadow, not one to take humiliation lightly, smashes Shadow Man to pieces in his rage. Not wanting anything to do with these strange events teleports away using chaos control. The reality distortions left by Shadow’s teleportation has the unintended side effect of giving our heroes a brief glimpse of what their realities were before Dr. Wily and Dr. Robotnik’s reality altering genesis wave.

Speaking of the Docs, they’re busy gloating over they’re “inevitable victory” and complementing each other’s mustaches. However, while the Docs are busy with all that, Dr. Light’s cell is visted by Rouge the Bat. It seems the managed to escape becoming one of the Roboticized Masters and, being a master infiltrator, made her way onto the Wily Egg undetected. Her plan is to undermine the Docs by sabotaging the Wily Egg and needs Doctor Light’s help.

Back with Mega Man and Sonic, there’s a great bit of humor as Sonic struggles with the disappearing and reappearing blocks that are ever so common and ever so irritating in most Mega Man games. But, as per usual, they’re soon attacked, this time by Blaze Woman and Silver Man. But, once again, our heroes make quick work of them and move on, and Mega Man gains two new abilities in the process. And so our comic ends with the menacing figures of Knuckles Man and Rose Woman, the two remaining Roboticized Masters standing in the snow being ordered to destroy Mega Man and Sonic no matter what.

First and foremost, I really appreciate that Sonic is pulling his weight a little more this time around. In the previous issues it seemed like Mega Man was doing all the work, especially once Tails modified his Mega Buster to copy Sonic’s spin dash, effectively making Sonic’s presence almost unnecessary, something I felt did a disservice to Sonic. Fortunately this time, the two work together very effectively. Also, it’s nice to see my favorite Robot Master, Shadow Man (the Mega Man 3 variety obviously) get the spotlight, albeit briefly. Also, I’m really glad we got a flashback to Shadow getting taken by Copy Robot, as I didn’t appreciate seeing him get roboticized off panel. Finally, as always, Wily and Robotnik’s bromancing is an absolute delight.

The main problem with this issue is the fact that the fight scenes are over way too quickly. In the previous chapters where Mega Man and company fought Dr. Wily’s Genesis Unit, the fight was excellent and was given plenty of time, same thing with the fight with the roboticized chaotix. Here however, they try to cram to many fights into one issue.

A solid chapter in this tale, but could have done with some better pacing.

Other reviews for Mega Man #26 - When Worlds Collide Part 7: Evening the Odds 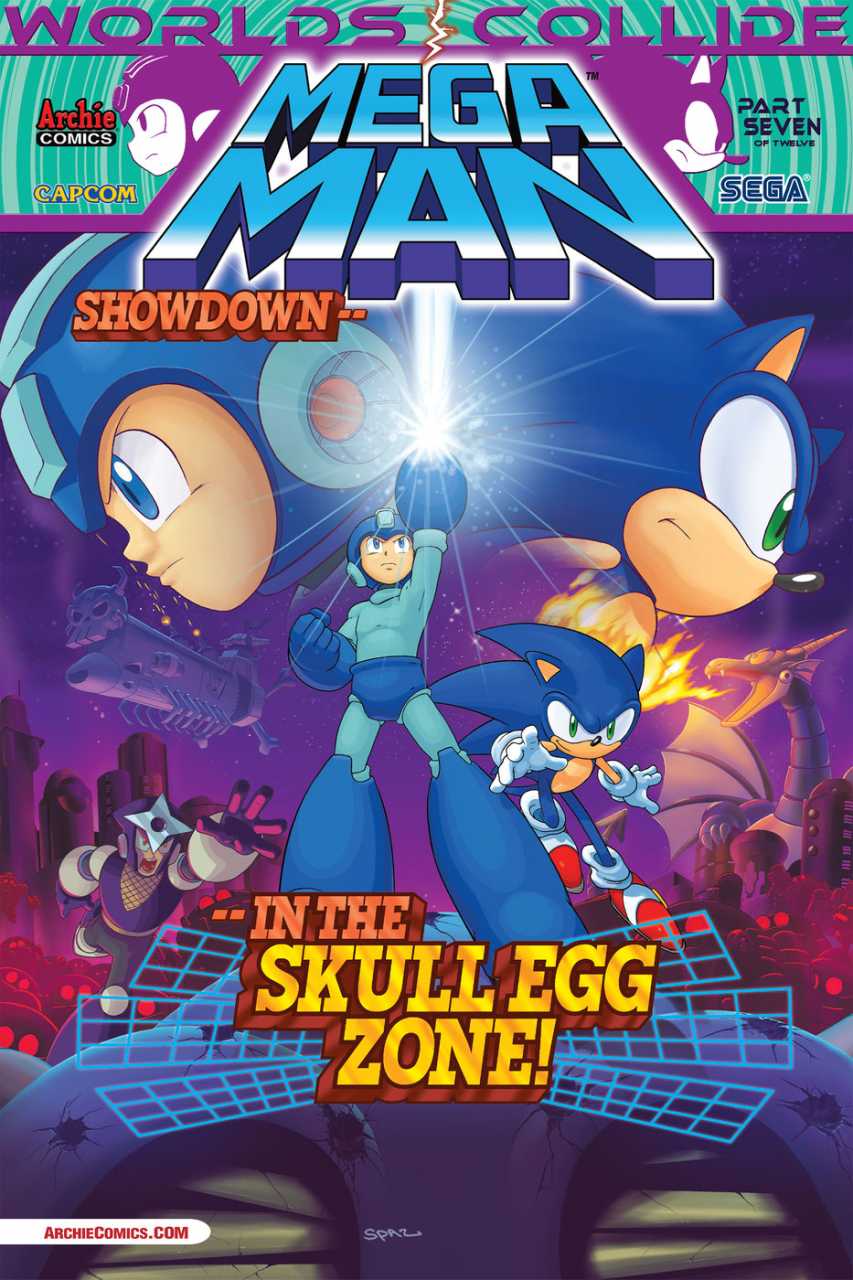 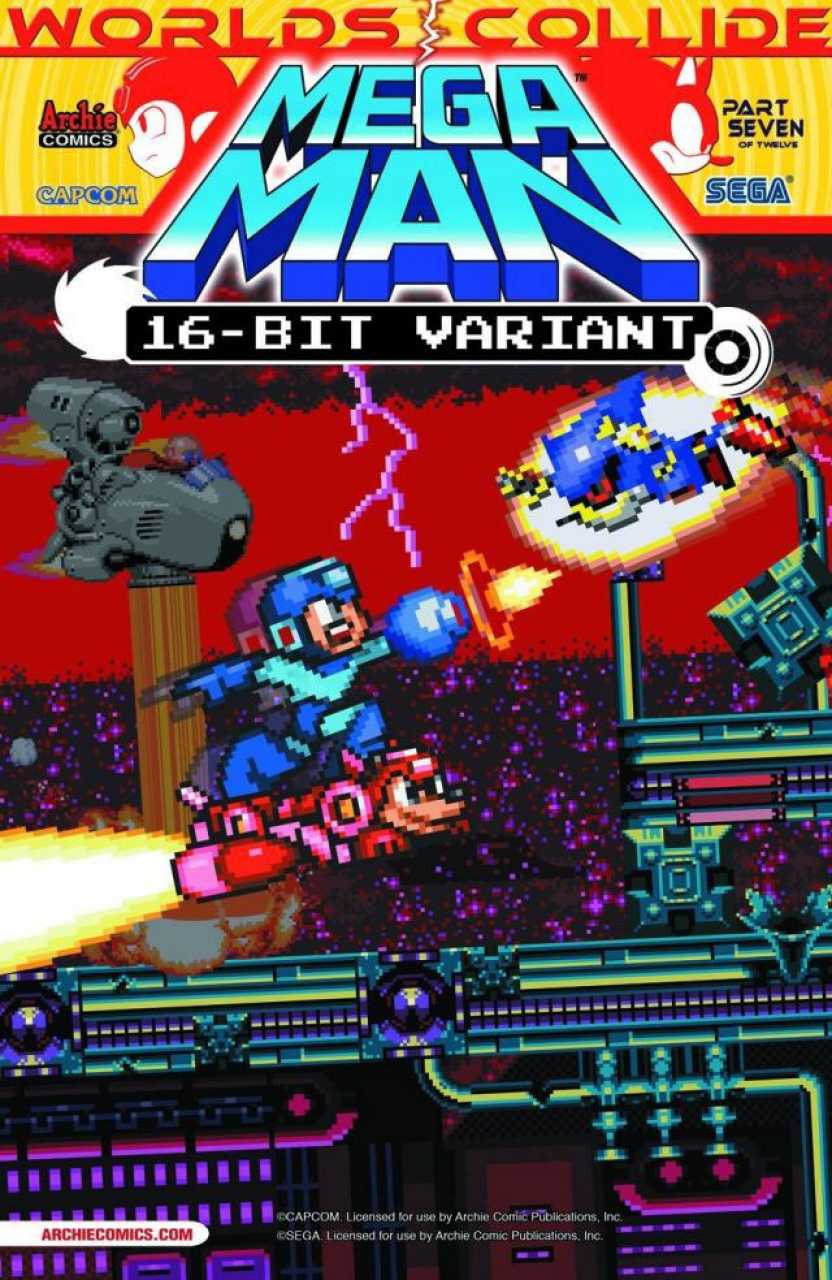