Could Have Been So Much Better

So, right off the bat let's talk about one of the best things about issue 8 of Kull the Conqueror: the cover.

Though the title and indicia takes up a full third of the page, the lower two thirds has probably the best cover art of the series. There's no secret here - Kull will be facing off against an imposing werewolf. And the lithe figure of a woman, (unconscious? dead?) lies at his feet amidst spilled wine and fruit. Very intriguing.

The story within is, once again, an adaptation of a Robert E. Howard short story, adapted by editor Roy Thomas, and scripted by Len Wein. And, once again, it yields mixed results.

The source text, Robert Howard's short story 'Wolfshead' wasn't originally a Kull story - nor did it feature his other barbarian creation, Conan. Instead it was a story that took place somewhere on the West African coast during the 17th or 18th century. It was more a Dumas style swashbuckling adventure story crossed with a horror tale than heroic fantasy. And that's where the trouble starts.

In order to shoehorn Howard's story into the ongoing Kull series, a number of concessions had to be made. Kull and his men end up shipwrecked on an island where their boats are damaged and Brule is injured in an attack by the native's 'Leopard Cult'. Instead of a protagonist the guest of a genial host, as in the original story; Kull is virtually a prisoner in the castle of a despot - an even more threadbare cliche. And all of this is besides all the normal concessions of adapting to the comic medium - condensing/compositing characters, removing subplots, etc. The end result is a comic that waters down the source material and is probably less well off than it would have been with an original written-for-comics story.

The material is still strong though, especially for its era, and would probably be better if it weren't for a second flaw - Marie Severin's colors are pretty off this time. There are some great panels - like the splash panel where Kull shouts from the deck of his ship during a stormy night - but there's also a lot of other problems, like the natives skin color changing from peach to olive to dusky. In some panels the color is given way too much attention - such as a distracting Persian rug in one scene; and at other times it's not given enough attention - such as confusing battle scene where everything is a monochromatic bright green.

So the high points are pretty high in this comic, but the low points are also pretty low - making it about average overall, which is a shame because 'Wolfshead' is a great story... I hope to see a straight, faithful, comic adaptation someday.

Other reviews for Kull the Conqueror #8 - Wolfshead 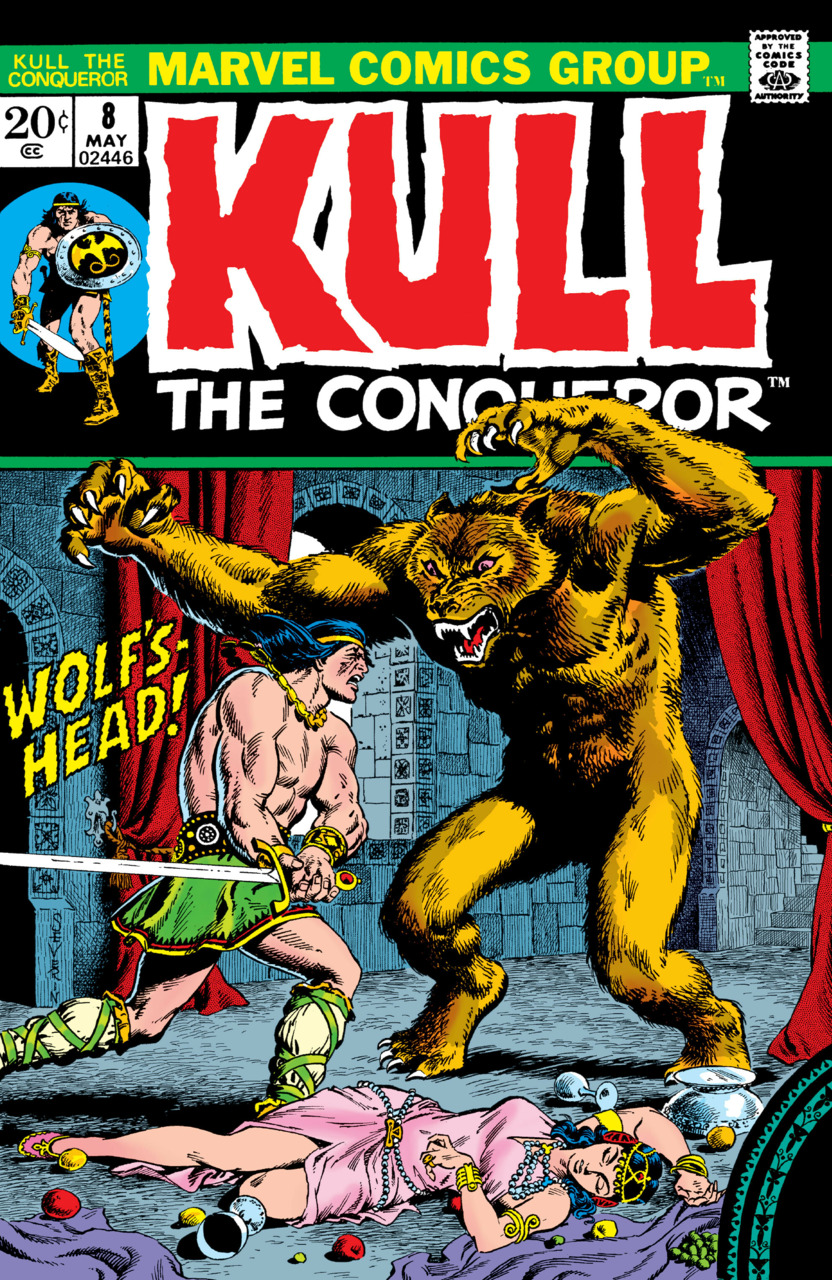