A Mishmash of Too Many Writers' Ideas

Kull the Conqueror was going strong until issue 7 where it staggers and ultimately fails with the adaptation of the short story 'Delcardes' Cat'.

To understand the problem we need to take a look at the origins of the source material. 'Delcardes' Cat' was originally a story called 'The Cat and the Skull', written by Robert E. Howard (creator of Kull) and submitted to the pulp magazine Weird Tales in 1928, but Weird Tales rejected the manuscript. The rejection isn't surprising - it's not one of Howard's best stories, seeming to lack focus. Howard threw in Thulsa Doom, Kull's nemesis, almost as an afterthought in a late draft, and Doom comes across as a pretty hackneyed antagonist.

But that's not the only odd addition to the story. Young Robert Howard was greatly influenced by the writings of his idol and mentor, H.P. Lovecraft, particularly Lovecraft's so-called "Cthulhu mythos" involving ancient inhuman beings. At the time 'The Cat and the Skull' was written, Lovecraft was at his creative peak, and had just published the cornerstone of the Cthulhu mythos stories, 'The Call of Cthulhu', earlier that year. And so Howard saddled a story that begins around a talking cat and court intrigue, with Kull encountering tentacled horrors and fish-men. Some say that Howard was also inspired by Lovecraft's own mentor, Lord Dunsany, citing similarities to Dunsany's earlier work, 'The Fortress Unvanquishable Save for Sacnoth'.

But 'The Cat and the Skull' would never see print in Howard's lifetime. It was resurrected 40 years later by fantasy aficionado Lin Carter who (as L. Sprague de Camp did with Howard's 'Conan' stories), revised and rewrote unfinished and unpublished Howard manuscripts, releasing them as a posthumous co-author in the paperback anthology 'King Kull' (Lancer, 1967). Carter retitled the story 'Delcardes' Cat'; and I'd not be at all surprised if the random giant water spider attacks were also Carter's additions, as they seem inconsistent with the rest of the story in a way similar to de Camp's amendments to the Conan stories.

So, we already have a disjointed Howard pastiche that shows the influence of 3, possibly 4 writers even before the Marvel Comics adaptation begins...

But it doesn't end there! Whether to fit it within the framework of the existing Kull the Conqueror series, or out of a desire to embellish the tale with his own ideas, writer Gerry Conway further adds to and alters the story. Some of these changes make some sense - the character Kulra Thoom is renamed Kulra Thorr (presumably to prevent confusion with Thulsa Doom) - while others, like the inclusion of Kull finding a magical sword lodged in a tree are baffling.

Nor is Gerry Conway probably the only one at Marvel that had a hand in shaping this tale. He's listed only as 'scripter' on the book. Likely, Roy Thomas, editor of the Kull the Conqueror series had the opening of the story changed to include an assassination attempt on Kull so that this story would mesh better with the issues of Kull the Conqueror which he himself had written.

The end result is a schizophrenic pastiche of writers' plots that serves little purpose but to fill one issue of Kull the Conqueror with meaningless action sequences and the title 'The Dwellers in the Depths' on the cover (featuring undead creatures instead of the fish-men within), and the title 'Delcardes' Cat' inside.

It's a credit to all involved that the thing didn't turn out to be an incomprehensible mess.

Other reviews for Kull the Conqueror #7 - Delcardes' Cat 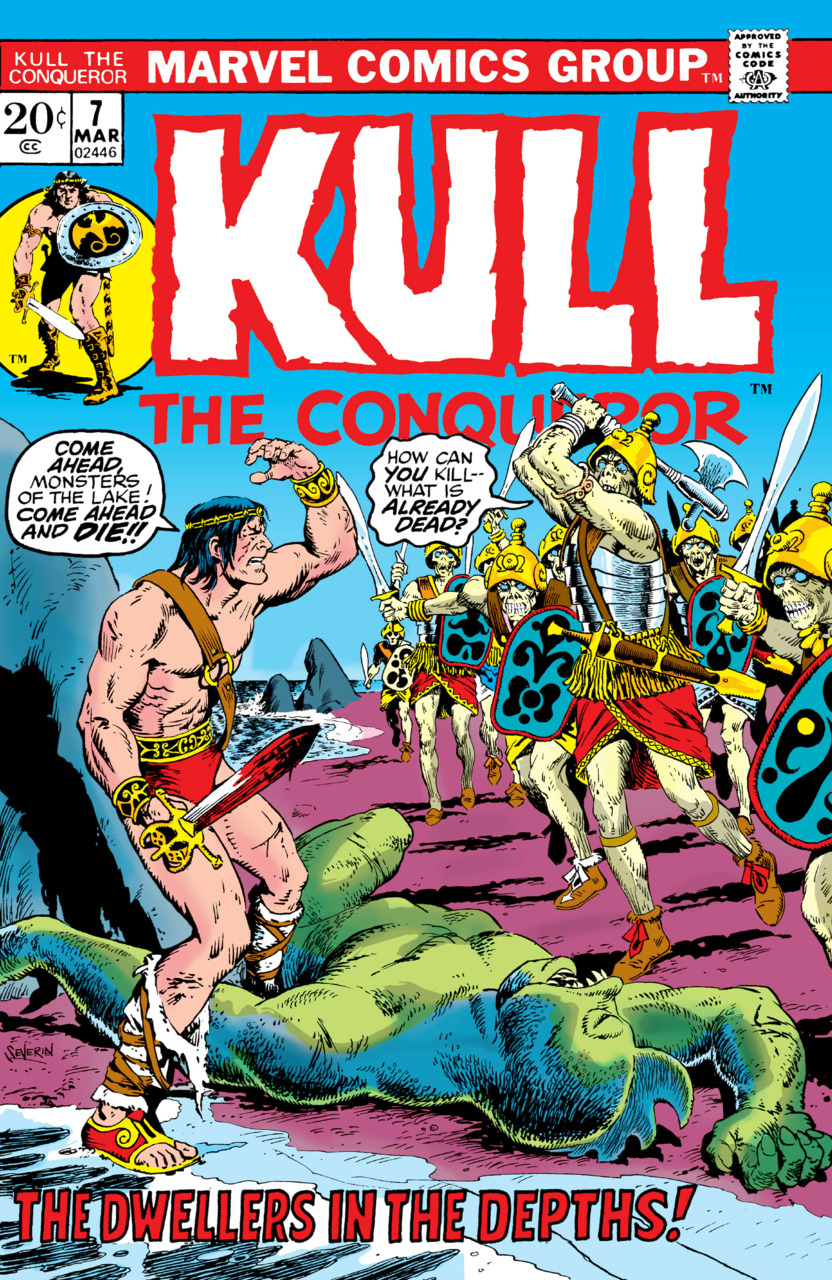