katatonia's Karnak #6 - The Flaw In All Things Part 6 review

I've decided to write a detailed review of this comic, as I've been a really big fan of Warren Ellis's works and think this needs to be mentioned. Karnak, at face value is a very nice series from the artwork to the insane writing. But there's something I don't understand, which I'm trying to understand here. I get in comic-continuity that Karnak himself looked a lot like the original Redhood with this big green dome over his head (Redhood with a red dome). Which quite frankly was pretty stupid. Inhuman's was a great idea, but still lackluster. I'm not knocking it. But I mean, I would choose the classic X-Men series by Stan Lee and Jack Kirby over Inhuman's cause it's just a better story. But what throws me off here, is that Karnak in this series is like his own self-contained character. Which I like a lot. It's a lot like Punisher MAX by Garth Ennis. Punisher was the only character in the series. As is the same case here with Karnak.

But this throws me off even more, what was the whole point to this story? Warren Ellis is a hell of a writer. I love almost everything he writes. He's like Alan Moore rank. He's waaay up there. I get that Karnak can see the flaw in everything and anything. I mean he seen so many flaws, that he knew he was flawed and killed himself in the Inhuman's series. That's pretty extreme, it's like working in McDonald's and you know the whole business but you know the predictions for the sales of the day are completely off so you blow your head off with a gun. In reality, that makes no difference if you do or don't kill yourself, cause life still goes on. However, the story is pretty good, I liked it a lot. Even though it feels a lot like that. Besides this final issue being pushed out almost 4 months after it was solicited. And on top of that, the trade is coming back to back with this issues release next month in March.

From what I gathered, Karnak was sent to retrieve a boy who had powers to enable anyone to become anything they want. However, he would turn people into monstrous abominations. Karnak himself, might as well be an Inhuman serial killer. Cause he kills so many people in this series that it's not even funny. He just goes through everyone like they're peanut butter and jelly sandwiches. The action sequences are amazing, don't get me wrong. Ellis is amazing at detailing a great fighting sequence. And the artists are pretty badass as well. And it's pretty great to see Karnak interrogate someone and keep breaking their bones at a touch. Like some sadistic animal enjoying the bounty of his prey.

In the beginning of the story, Karnak made a deal for a few million dollars to get this kid back to his family. On top of that, he was working with S.H.I.E.L.D. to locate his whereabouts. He goes through factories and all kinds of places and just runs through everyone. Then has a showdown with this kid and it didn't end so well for Karnak. Then the ending of this series which I believed was rushed to finally end it comes. He gets a teleporter from S.H.I.E.L.D. and locates the kid. Which that was never explained how they even found him to begin with. I mean sure, they knew where his compound was. But where he was could've been anywhere. Regardless to say, it felt like a pretty bad B-Movie. Karnak and this kid battle, and in less than 2 pages, Karnak hits this kids temple and strips him of his powers and then like a psychopathic asshole he strikes him again and says "this is for me" and turns the kid into a handicapped drooling mess.

No one knows if Karnak was offered the money at the start or of the end of the series. Cause at the end he tells the family "My payment, as discussed." The father of the boy starts crying and says "Fine. We spent a whole day together once, just talking" and hands Karnak a picture of the boy with his family. Karnak grabs it and says "Very well." and walks away. He then goes back to the Tower of Wisdom, sits Indian style in front of a wall looking at that picture and has his right hand covering his face. Which signifies he understood he made a mistake or regrets his decision. No one really knows, only Karnak knows that. But really, as good as this series was or could have been. It was brutally rushed. It could've maybe been 7-8 issues long. Maybe even 12. There wasn't enough information to explain to the readers what was going on. It was brief explanations on the current events. Nothing skin deep to really understand or enjoy. Plus the last issue kept getting pushed back months. Which didn't even help the series out either. In fact it took away a lot from the series cause I'm sure everyone became uninterested with it after waiting so long.

I'm unsure if it's the end of the actual series, or of the first arc. No one knows, cause there's no more solicitations for further issues of it. So one can only assume this was or is a 6 issue mini-series at best. If not, I'd be happy to read more of what goes on with this story and how it'll end up developing better. But for now, this was just a taste of things to come or not. But we all know Warren Ellis is a lot like JMS, he can write a great story and then leave it to do something else. We all know that from JMS's run on Thor which was amazing, but he left to do the first movie. Which looks by the way of things, Ellis is going to be doing "Wild Storm" for DC next month. So maybe this is really the end of Karnak as we know it.

As for my rating, I'll give it a 4-Star rating. It would've been a 5-Star if Marvel published the collected book of this in Hardcover format. The story is good don't get me wrong. It just could've been a hell of a lot better if Ellis was more focused and put a lot more into it. But for what it's worth, I enjoyed it. And I hope all who all read it enjoyed it as well. 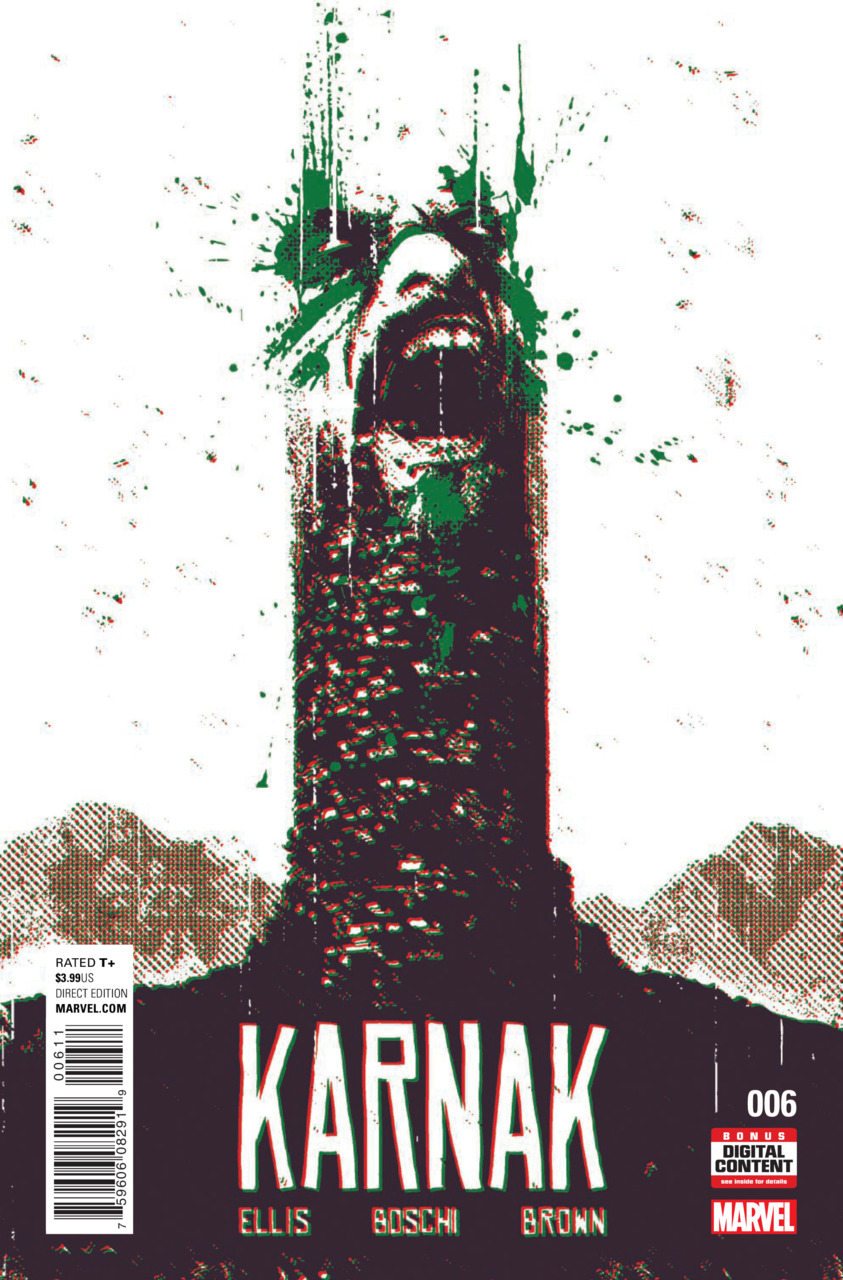