Back to the Future

Reeling from the draining of his power by Odin Thor lost in battle to the Tomorrow Man and his slave robot. Now Thor is under oath to conquer the 23rd century for the nefarious villain. Can Thor save the future and himself without breaking his word?

Stan Lee sets out to resolve Thor's issues with the Tomorrow Man and he succeeds for the most part. Thor's actions while under the thrall of the villain are uncharacteristic of our hero and his solutions to avoid bloodshed are clever albeit typical of ridiculous sixties comics. (he hypnotises guards by reflecting sunlight on his hammer for gods sake!) and the comic ends with a satisfying resolution.

This is a well drawn and inked comic, Kirby does a great job with the futuristic world of the 23rd century, and there are a number of wonderful detailed machines that I enjoyed. Marks off for the terrible ink job by Reinman in the Tales of Asgard story however. All the detail is lost and some pages look like they were drawn by a child.

All in all I've been really enjoying the continued adventures of Thor. The last three issues have all been enjoyable and the effort to tell a continuous story has paid off. This is a satisfying second part resolution to last months story.

"It Controls Every High-Level Decision Made On Earth! It Actually Rules The World For Humanity"

Other reviews for Journey into Mystery #102 - Slave Of Zarrko, The Tomorrow Man!

This story begins with the statement: You are about to enter the world of the future, where the mighty Thor must do the bidding of a master villain!!  Another Marvel Triumph!! The same message appears on the cover, which leads me to wonder, how exactly is Thor being enslaved a Marvel Triumph?  Yes, I know, typical Stan Lee hyperbole - you know damn well it refers not to the Tomorrow Man's triumph, but to the triumph of the Marvel Age of Comics, the writers (Stan) who are telling us this fantasti...

Slave Of Zarrko, The Tomorrow Man! 0

Thor ditches the melodrama this month as the stunning climax of part 1's cliffhanger comes to a full on action-packed close. Okay so, I'm making it sound better than it actually is; simply because much like the issue before it, the action on display here is incredibly dull and simplistic. From silly elaborations on the supposed utopian 23rd century, to the usual Journey into Mystery Thor can do anything deus ex machina, this second part which I was actually optimistic about, fails to keep the tr... 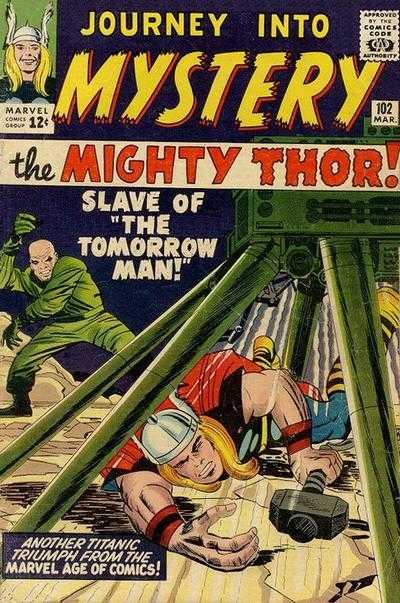