If there's a major Batman villain you don't respect, it's probably The Penguin. I know, I was there once. If there's one Penguin comic you need to read, it's this one. You will learn both sympathy AND respect for the Penguin all in one tale, and that's pretty damn impressive.

Joker's framing scene is even better than in his own tale, but to be fair, Joker needed no flair to introduce himself, his actions and being speak for themselves. Well ok, this issue doesn't enter with a bang, but a perfect portrayal of Joker's spontaneous psychosis that cracks me up every time.

The artwork here is immediately easier to enjoy than Joker's. There's lots of incredibly moody thick patches of shadow. They provide FANTASTIC facial expressions for The Penguin, and they also make him intensely intimidating at all the right moments. Batman's almost obligatory minor appearance is practically a cameo, but it's another extraordinarily executed moment of comedy.

We're shown a traditional Penguin, perhaps a bit more sullen than usual, and very definitively written. He takes to his namesake very rigidly, but without being stupid or campy about it. And then we're shown the gentle bird hidden within, the Oswald Cobblepot gentle boy inside. As the story continues, we're actually shown true good inside this villain, but it takes only one tiny moment, one seemingly insignificant thing that unknowingly pinpoints the roots of decades of emotional trauma and dark development, twisting through the branches of Penguin's soul; and it breaks him somewhere inside. What follows is a devastatingly haunting moment that showcases just what makes the Penguin a foe to be feared. It's not his weapon, any kind of skills, or anything like that. Simple and pure, what makes The Penguin worthy as a Batman foe is his crippling ruthlessness.

It's not ENTIRELY his own fault. Sure he could've handled it better, but he seems doomed from childhood to ravage and destroy anything he loves, because it knows his evil, and it will always bite him back.

Another grand slam, two for two, in Joker's Asylum. Both villains so far have demonstrated very unexpected looks at their essence, the Joker giving us tales that define them, surprise us, and showcase a darkness beyond your usual Batman tale; and Batman himself has barely been involved.

Other reviews for Joker's Asylum: Penguin #1 - He Who Laughs Last...! 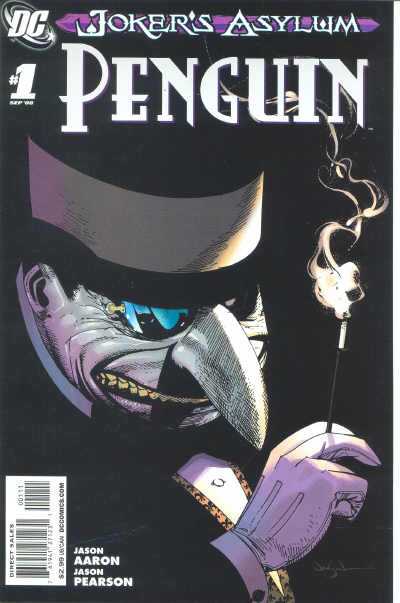