Almost 40 years after it's creation the Justice League returns to it's original roster and well.........it's kinda epic! Written by Grant Morrison and illustrated by Howard Porter this is probably the best Justice League run of all time.

I will try to not spoiler any details of the story but some basic plots will be addressed.

This format contains four stories from the original run.

Since this is the first part of the "best JLA run" you can expect that things start pretty big.A group of aliens called the Hyperclan comes and promises to make earth a prosper and peacefull world but the newly assembled JLA finds a hidden agenda behind their actions and try to stop them...basic plot.....but greatly executed! The story is fast paced without being Choppy.The whole book reads as a great summer blockbuster and this is what you kinda want from the Justice League, for character evolution you can read their solo titles.The dynamics between the members are spot on especially the Flash/Green Lantern one. Every hero gets a moment to shine and the reader sees what these characters bring to the team and why they fit so great together.

No need to spoil much details from the rest of the stories so let me give you an overall view of the book.The story is good,sometimes the dialogues are somewhat cliche but this is a minor problem.The always-evolving roster of the team entertains the reader and brings in new dynamics and possibilities story-wise.We get introduced to new characters that could grow on the reader but they lack the necessary time, Tomorrow Woman being a notable example and some of the characters like the Hyperclan or Asmodel, aren't so exciting until the last part of their respective stories.The last storyline would probably be the weakest part of the book but even that is way above average, it has a What-if feel to it so this may be a personal problem rather than a problem of the book since i am not a fan of what-ifs.Also i really like how Morrison adapted his stories to fit better with Superman's new powerset.

Now let's talk about the art.Howard Porter is a great artist but even a great artist can feel dated after 15 years.You can see some elements that while in the 90s looked great, now lost their appeal.Things like Superman's mullet and most disturbingly Wonder Woman's bikini or generally any female character's clothes don't look so good today but the art is consistently good and every panel has a very alive feel to it,you can feel the momentum in the action sequences and the character's faces express a great deal of emotion.The colors put by Pat Garrahy are kinda dark and i am not sure that fit perfectly with the tone of the story.

The story still holds up today without feeling cheesy and the art is better than most book of the 90s. Some elements feel dated by i don't think that will reduce from the overall entertaiment of this book.Highly recommended 8/10. 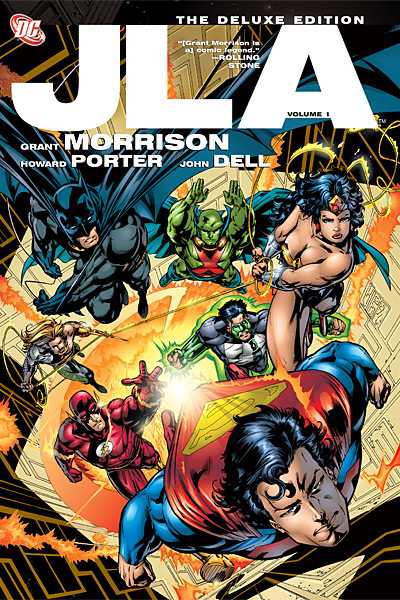