Invincible and his family begin to make preparations to leave Earth for good!

After the events of the last issue, Invincible has decided that even though Rex is about peace on Earth, Rex is too wild to be trusted, especially since Invincible now has a wife and child to worry about. So, the couple decides to throw in their superhero personas and head to the stars, safe and away from Rex's control over Earth! Which will really create some interesting adventures in the near future!

I said in my review for the last issue, that Invincible's choice of going off-world, because of the fear of his wife and daughter losing their lives at the hands of Rex, was a driving force for issue 116. In this issue, we know without a doubt that Invincible is going to leave Earth, and writer Robert Kirkman still rides Invinicible's new ideology of not going head first into every situation. Kirkman did a great job at not adding more to Invincible's new ideology, and just leaving it as it is and making this more-or-less a "goodbye" issue. While there isn't closure on any serious issues, only the name of Invincible and Eve's daughter is confirmed [her name being Terra], Robert Kirkman does a terrific job at making this a bit more upbeat than the last couple of issues. Sure, the couple runs into some problems with their choices between both friends and family, but Kirkman does an outstanding job at getting the reader excited for this new phase in Invincible's life while adding subtle touches to the past. For example, Mark went back to his old comic book store to talk about the fictional comic, Science Dog; also Kirkman showed a happy Amber in a new relationship. (Amber was Invincible's first girlfriend.) It was little moments like these that made this issue really enjoyable and glad that Invincible is going to be something new.

Plus, there were more scenes of Thragg vs. Battle Beast all throughout this issue, teasing to things to come from future issues in the series in the aftermath of their battle!

In conclusion, Invincible 117 is definitely a book you should pick up! 5 out of 5.

Other reviews for Invincible #117 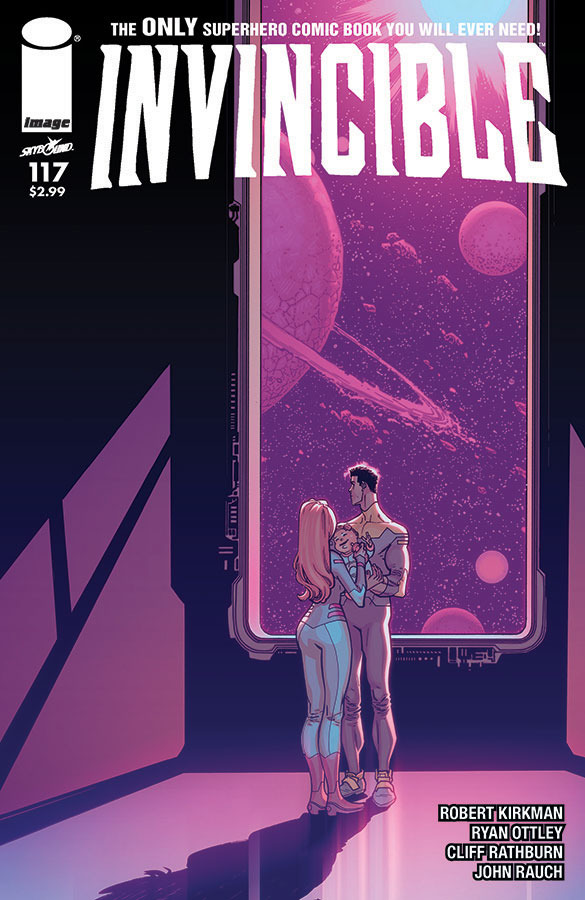