Injustice: Tripe Among Us

Well, that could have gone better. Despite a few nice little moments here and there, this is a slapdash pile of nonsense that strains credulity to the breaking point faster than apparently the gossamer-threaded breaking points of all so-called heroes in the DC Universe. The initial premise, while not new, is interesting enough: what if Joker got tired of losing to Batman all the time and took on Superman? Apparently, Joker can defeat every single hero but Batman faster than a hummingbird can flap its wings. And while the devastation Joker wreaks is indeed horrible and gigantic, I didn't quite believe Superman's reaction. And even if he did react that way, the ensuing events snowballing into the Pollockian canvas of what this world supposedly becomes just feels forced and tiresome.

Once again we have another writing team demonstrating their inability to write Wonder Woman in a believable, sensible way (much like the drawing teams' inability to draw her in a realistic, non-embarrassing way). Things spiral out of control so quickly in an attempt to get to the premise for the game (which I haven't played, so apparently I am not qualified even to have read this story thing), it is easy to forget the entire TPB is a flashback other than the first page or two, and since most of it is "5 years ago," how does this satisfy the attempt to set up the game? What happened to years 2-5? Oh, I see. You want more money and will likely make five more volumes of this palaver. I suppose "creativity" is too much to ask for these days. That probably sounds more harsh than I intend, but there it is. Even Alfred comes across as poorly done. None of the characters "feel" right, especially Wonder Woman (as mentioned), Aquaman, and of course Superman. I understand the basic idea, yes, of Superman setting up his version of Peace, and so to go about that things have to change, sure. I do get that. It just comes off so hastily done for the sake of getting to the goal (which is nowhere in sight by the end of volume 1) none of it is credible. Especially since Flash, the supposedly nicest of all, is working both sides - either that, or the writers of the last couple of issues forgot Flash changed sides to Batman's team and just said "well, whatever. Continuity is a price we cannot afford. On with the strained emotional moments."

Then, at the close of the volume, the real headslapper arrives Batman and Catwoman "asking" the President of the USA for him to do better. In one panel, they do indeed threaten him to make the world a better place: but not a generic better place, of course, but the kind of better place popular opinion of the day envisions: one in which the 2nd Amendment is no more, one in which governments stop dictating whom we can love (apparently that's code for "marry"), and one in which we stop driving using non-spiral light bulbs (the ones that are filled with mercury that don't work as well as the round bulbs, you know the "environmentally friendly" ones that can only be disposed of by Hazmat teams). And then, after the political shash has finally come to the surface, Catwoman wants us to pretend their threats were simply "asking" the President to do better. Continuity is such a rare commodity these days. So are good stories free of political agenda, apparently. Could have been better, this.

Other reviews for Injustice: Gods Among Us #1 - Volume 1

The ultimate boy scout experiences the ultimate loss and all will pay. 0

Superman is going to receive the shock of his life when Batman&rsquo;s prime nemesis, the Joker, pays a visit to Metropolis and picks a feud with him, simply because he&rsquo;s tired of constantly losing to Batman. The results are tragic, as Superman reaches his breaking point and soon the whole world will experience a change like nothing it has ever seen. -summaryBased on the 2013 fighting game of the same name. Injustice: Gods Among Us takes place in an alternate reality very similar to DC&rsq... 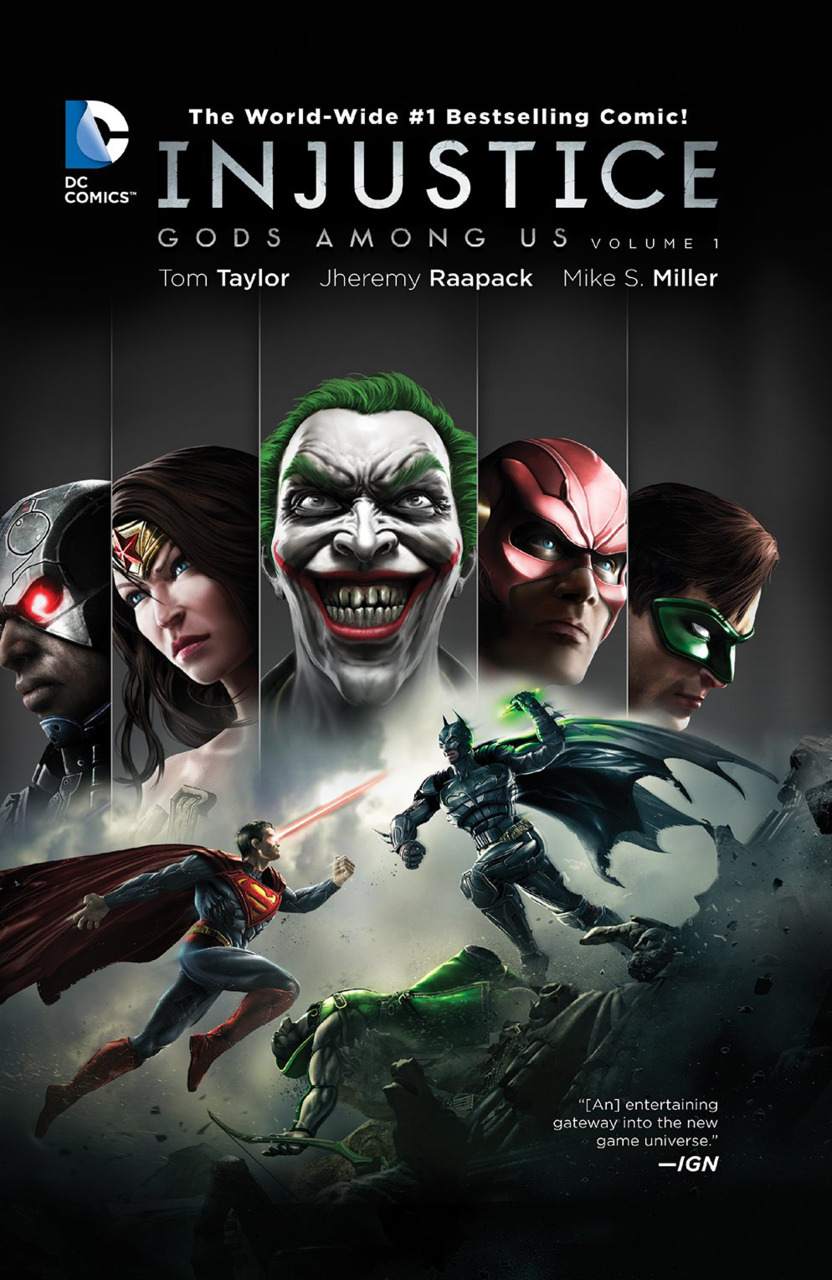