This series has been perfect so far, and although this issue drops that perfection it is still a brilliant issue, and the series has been what Hulk has needed for a few years. I always had high hopes for this series when I heard that Mark Waid would be writing, but I never expected it to turn out as good as it's been so far.

This was a brilliant issue, and although it wasn't quite as good as the first two issues it was still outstandingly good. Waid has done an excellent job on this series, and although this issue isn't quite as good as the previous two it is still brilliant, and I am loving the direction he is taking this series. One thing I've liked about this series so far is that the issues have been one shot issues, but what I prefer to this series compared to other one shot issued series is that it all fits into a bigger picture, which is nice, as new readers could pick it up at any moment whereas people who have been reading the entire series can see progression, which is always nice. The main reason that I don't think this issue was as good as the last two was that it spent too much time on developing, and didn't spend enough time on the main story. This is probably a good thing, and especially for the future of the series, as it's always good to show the development, and hint to things that will happen in future issues, but at the same time this lessens the quality of this issue, but for the greater good of the series. I've also enjoyed that Waid has brought things from Hulk's past into the series, and have loved the development in his relationship with Maria Hill, but I'll talk more about that later.

The art in this issue was once again outstanding, and Leinil Francis Yu contines to make this series look awesome. His art is perfect for this series, as he is able to make everything, whether large or small look fantastic, and I hope that he stays on this series for a long time. The detail in his artwork is brilliant, and although there are a couple of panels that lack detail they can be excused, as are in the distance, and it would be hard to add brilliant detail, without spoiling the scene, plus the rest of his art well outweighs the small imperfections. Although he draws everything brilliantly, whether characters, or scenery, the thing I like most about his art in this issue was how he handled the switch between Professor Burke, and Banner, as it was done excellently, and I loved that he didn't over exaggerate his artwork, especially when Banner was transforming into the Hulk, as it was gradual, and not sudden.

This issue started with Maria Hill interviewing potential lab assistants for Banner. I thought this was a fantastic idea, as it shows just how determined Banner is to making scientific breakthroughs, and although I've loved seeing Hulk Smash, the development of Banner becoming a proper scientist has been what's interested me the most, and seeing this development shows how serious Waid is handling it. I also liked the different background of all these lab assistants, and that they are willing to take the risk of being attacked by the Hulk as long as they get to work with Banner. I also look forward to seeing how Banner reacts to these assistants, as he's already shown that he doesn't like the one Hill picked out for him (see the last page of the issue).

The other part of this story was A.I.M. attempting to kidnap the final member of the Quintronic Man crew, Professor Burk. This was were the most action took place, and I loved seeing the Quintronic Man again. The thing I liked most about this sequence was how Banner infiltrated A.I.M., and switched with Burke, and I especially loved how Maria Hill described Banner as a WMD (Weapon of Mass Destruction). The sequence that followed with Hulk fighting A.I.M. was nothing short of epic, but the only reason that it wasn't perfect was that there wasn't enough build up, and it felt a little rushed. Besides that the sequence was terrific, and I've loved seeing Hulk fighting for S.H.I.E.L.D., something I was slightly sceptical about when I first heard that he would. Don't get me wrong I always thought that it would lead to an interesting story either way, but I also didn't think that Hulk would fully co-operate with S.H.I.E.L.D., but there's still time for that.

Another thing I've been interested in this series has been the development of Banner, and Hill's business relationship. It was obvious at the start of the series that Hill was only going along with Banner due to it benefiting S.H.I.E.L.D., but I've enjoyed that she's started to see Banner as one of their own, and that she able to have conversations with Banner that aren't fully business, by adding in sarcasm, and mild humour. I look forward to seeing further development of this relationship, and whether Hill will let her hair down or not, as although she's done it slightly in this issue, it could still easily be considered business.

This was a fantastic issue, and although it wasn't quite as good as the previous couple of issues it was still brilliant. I would highly recommend both this issue, and the series so far, and am extremely looking forward to the next issue.

I love this series this is the best Marvel Now! Series I have read hands down I hoped this series would be good and it definitely is one of the best series out there.PlotMaria Hill interviews several candidates who want to work as Bruce Banner’s lab assistants. A.I.M tries to capture Proffesor Burke but are ambushed by S.H.I.E.l.D but they fight them off and go to a volcano where they have built a base but Bruce Banner appears and turns into the Hulk.ReviewThis was a great issue and is a great c...

COVER ART: 4.5/5 I am still getting used to seeing HULK wearing armor. I understand it, I get it, I just think it looks silly; however, LEINIL YU does a fantastic job drawing a highly detailed fight pose between HULK and Quintronic Man. I love all the little details on both characters and great use of color.STORY ART: 4/5 Do I LUUUUVVV LEINIL YU's art, well, I don't know. It isn't bad. It is a lot better than a lot of other art out there right now, but I don't think I will be putting him in my t... 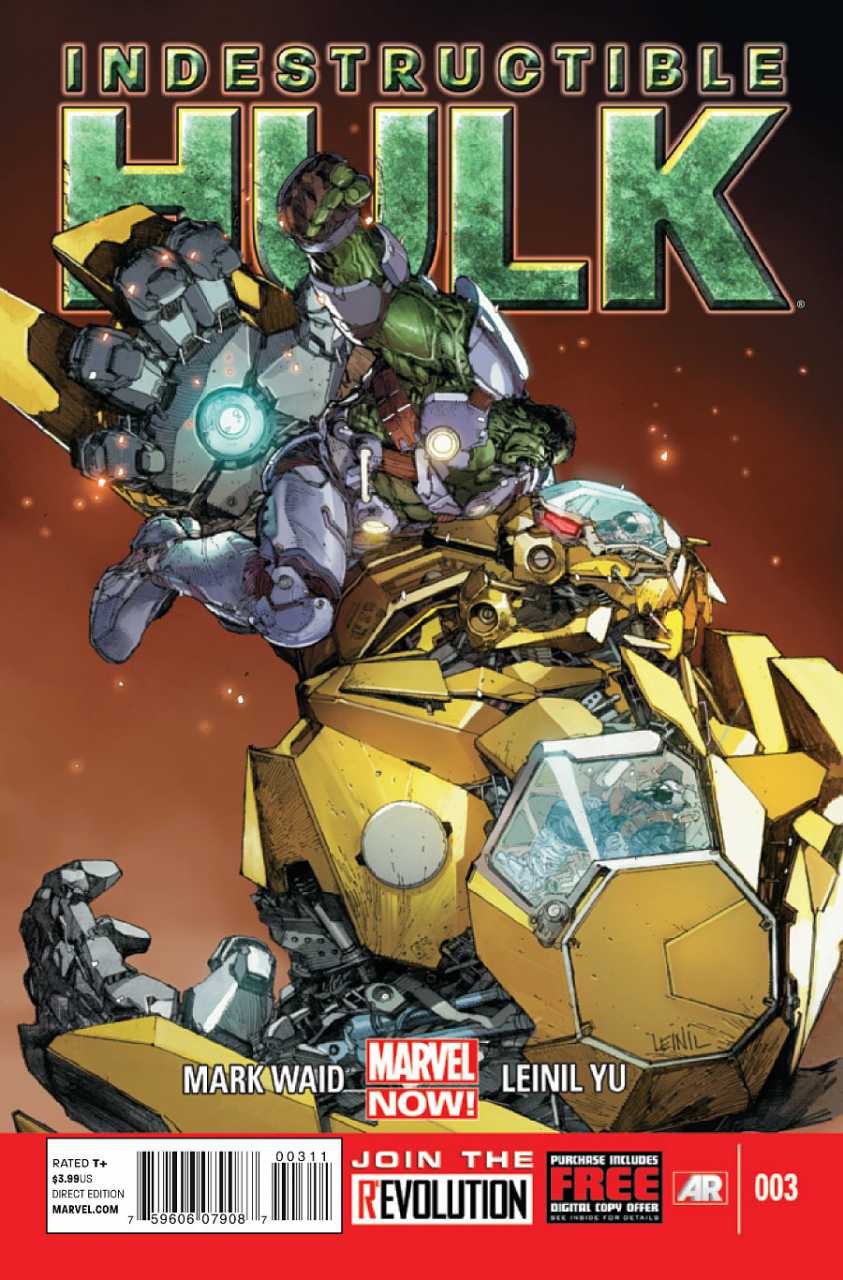 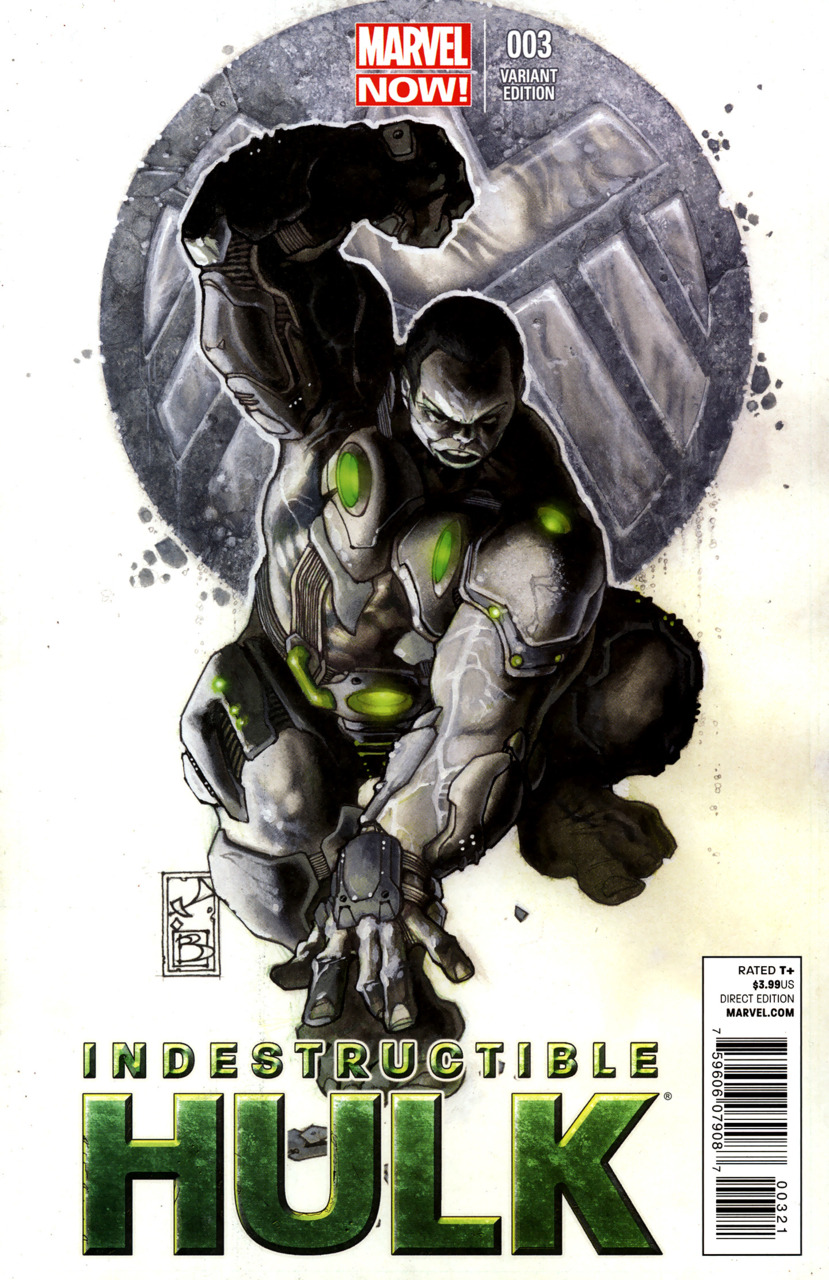