Working Script: A Review of Highspot #1

Scene 1: Fade in on a comic book opened to its splash page, showcasing the artwork. The pages of the comic reveal a slight patina of yellow, marking it as having a little age and a little usage but still eminently readable. The pages begin turning slowly one by one as a voiceover chimes in.

Voiceover Narration: In 1988 the great Mike W. Barr recruited a new and relatively unknown artist for his stellar fair-play mystery series, The Maze Agency. The art was overall well above average if a little rough in spots but there was something about it, some gut-punch feeling that hit you when you looked at the pages that this artist was going to be amazing.

Cut To: An unending series of comic book covers highlighting the incredible talents of Adam Hughes. The voiceover continues.

Voiceover Narration: In just a few short years that young artist would make an indelible mark on the comics industry with his smooth line and near-perfect composition. His craft was as instantly recognizable as his signature AH, short for Ah yeah, another Adam Hughes comic.

Smash Cut To: The cover of Highspot #1 as again the comic opens and the pages flip forward, allowing everybody time to notice the similarities. The voiceover continues.

Voiceover Narration: Highspot #1 by writer/artist Rob Jones is the story of budding polymath Kate Carter. Raised on a steady diet of adventure movies like Raiders of the Lost Ark. Kate puts herself through stuntwoman training as she’s taking archaeology courses in college. Everything’s cool until the fateful day she meets her idol, the famous archaeologist Jerry Carter (apparently no relation) who agrees to let her come along on his latest expedition… for a price. Hijinks ensue. Plot-wise, the writing is tight and everything moves at jet speed pace. In fact, if I have one gripe with Highspot (and let me assure you it’s minor) it’s that I would have liked a little more backstory on Kate and perhaps some repercussions for her actions. It’s only issue one though and I’m betting that’s coming.

The real showcase here is Rob’s art. He’s a rough cut diamond that’s already received a lot of polish. His page layouts and his anatomy definitely recall early Adam Hughes but he has his own style and if we’re comparing action scenes, Rob wins hands down. Everything gels together nicely as Rob’s prodigious skill with composite action scenes dovetails with the fast pacing of the plot.

I had a lot of fun with Highspot. It’s a great read that jumps you right into the action from page one and it doesn’t slow down. The art complements the story in a way that few other comics can match and I predict that it’s only going to get better as it goes on.

Cut To Final Scene: Zoom in on the last page of Highspot #1 as the voiceover continues.

Voiceover Narration: Check out Highspot #1 and get in on the ground floor of what’s sure to be an instant classic once Rob Jones is super famous and you have to hock your X-Box to get copies or if you just want a mighty fine way to spend a little bit of your afternoon. Highspot is for anybody who likes action, adventure and comedy… and who doesn’t like that?

The credits roll stops right after the stunt team list and we open on director Kevin Smith who looks directly at the camera and monologues for two minutes about how cool his new movie is, and as an afterthought, name drops Highspot #1. The credits continue to roll over the top of him as the music swells to drown him out. Eventually, he gives up trying to talk over the music and exits stage left.

Other reviews for HighSpot #1 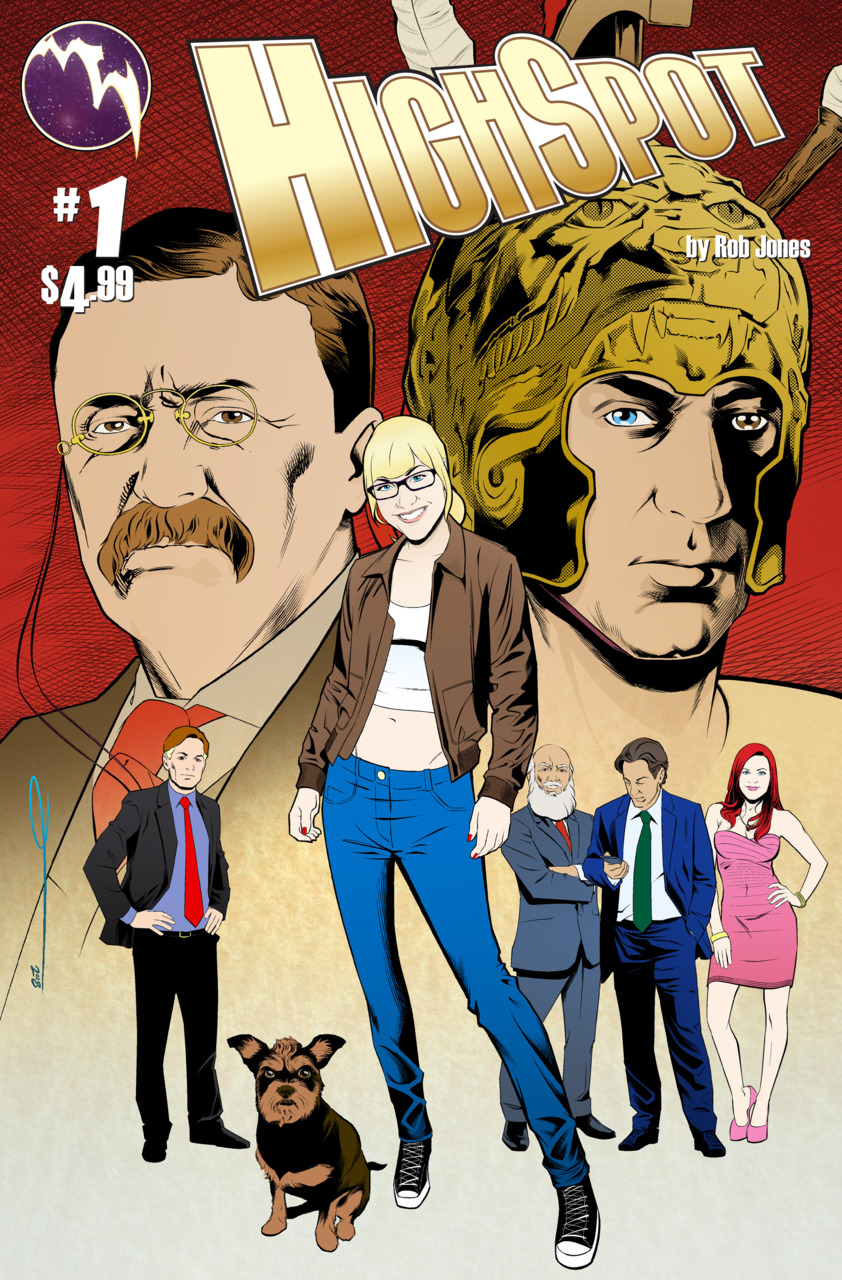