I have been enjoying this series so far as it's been amazing. I've been loving what Matt Fraction has been doing with this series and although I've loved all his one-shot Hawkeye tales so far I am happy that he's doing a story that lasts more than an issue, even if it's only two.

This issue sees Hawkeye get brought in by S.H.I.E.L.D. who tell him that a tape of him killing a terrorist has been put up for auction in Madripoor and that he needs to retrieve it. Hawkeye however isn't the only one after the tape, ton's of criminals are after the tape includinh Madame Masque.

This was another brilliant issue of Hawkeye and I haven't been disappointed with one issue so far. Fraction has been doing a brilliant job with the characters in this series and I've been happy to see that the series is of a similar style to The Immortal Iron Fist (which he also worked on with Aja) by adding multiple Hawkeye's to the series, with both Clint and Kate Bishop. I do however like how this issue especially that Kate's role has been lessened as Clint is the main character in the series and it needs to show. I also like that although Fraction lessened her role in the issue he also found a brilliant way to involve her at the start. The main thing I liked was that Fraction made this more than a one parter. Don't get me wrong I've loved all the other issues and if I was given the option of ton's of brilliant one-shot stories or multiple issue stories that are mediocre, I'd take the one-shots easily, it's just that it's nice to see Hawkeye in a good multi issue story and I hope Fraction does an even longer story further down the line.

Although I miss seeing David Aja's art Javier Pulido's art is still very good and of a similar style to Aja's. Although Pulido's art isn't the most stunning to look at or have much detail, it is a very fun style art which suits this series perfectly. I usually dislike art that doesn't have detail in it but I can enjoy this as I love the way he treats the series making you feel all the silliness that's going on. I also loved how he drew the facial expresions in the characters espcialy whin Clint was either feeling joy earlier in the issue or discomfort when Madame Masque was searching him. Matt Hollingsworth continues to add brilliant colours to this series, and the monotone, retro fell in the colours makes this series feel more fun and stylish. Although I liked Pulido's artwork in this issue I can't wait till Aja returns as his art is simply stunning. Also got to give Aja thanks for his work on the cover. I don't know how he manages to do something that is that simple but so brilliant, whilst doing this for each issue.

The story itself was brilliant and I'm happy that S.H.I.E.L.D.'s work using black ops superheroes like Hawkeye have came back to haunt them. I also liked that Captain America was involved in this as with him being heavily involved in S.H.I.E.L.D. as well as being against terrorism it's nice to see him have a say. Although I think it makes for a great Hawkeye story I do have to question if it's fair to send Hawkeye to get this tape as it was their mess and it's him that the tape will affect the worst.

The way Clint got picked up of the street by the Helicarrier was hilarious. I also found it funny that before getting picked up he was arguing with an old guy that he wasn't an Avenger and how his argument was lost when the Hellicarier arrived. The expression on his face whilst getting taken out of the blue was also priceless, and very funny. The only thing that I thought was a bit odd though, why didn't they just call him in instead of going to all the trouble of making a big scene in the middle of a public place. I know it makes for a more dramatic scene which I'm grateful for, but the part of me that nitpicks at things questions the necessity of it.

I've always liked the Madame Masque character so it was nice and interesting to see her involvement of in this story. I usually prefer seeing the character in an Iron Man story but it was nice to see her in a Hawkeye story for a change. It was also nice to see other villains like Kingpin and and villainous groups like HYDRA and the Maggia were after this same tape showing that nothing is a secret in S.H.I.E.L.D.'s line of work and that everyone's willing to pay out their skin to have something to tarnish S.H.I.E.L.D.'s name.

Although David Aja wasn't doing arts on this issue it was still good and one of the best series' Marvel is producing the now. I would highly recommend getting this issue and the series so far and am looking forward to seeing how this story concludes next issue.

VHS Is Lower Quality Than DVD 0

David Aja is a man who damn well knows how to draw a cover. While there are so many out there that try and shove as much as they can into a single image, Aja gives us such elegant minimalism. I mean, this cover is a VHS tape and some lines that represent sound levels. But it's so compelling, especially in this day of DVDs and Blu Ray. What's on 'The Tape?' Why is it on a freaking VHS tape? Ever since they first released this cover it's compelled the hell out of me. David Aja isa freaking genius....

Synopsis: Hawkeye may become the most wanted man in the world if he doesn’t get a hold of a tape.A serious situation comes to Clint attention that could cost him and basically the United States dearly, and it’s caused by one tape (a tape? The hell uses tapes anymore?) But of course, it can’t be too serious with Matt Fraction so, he spices things up a bit. Using Madripoor as a setting, this works for Clint as he always seem to have bad luck wherever he goes.Matt Fraction once more has Clint’s cha...

0 out of 1 found this review helpful. 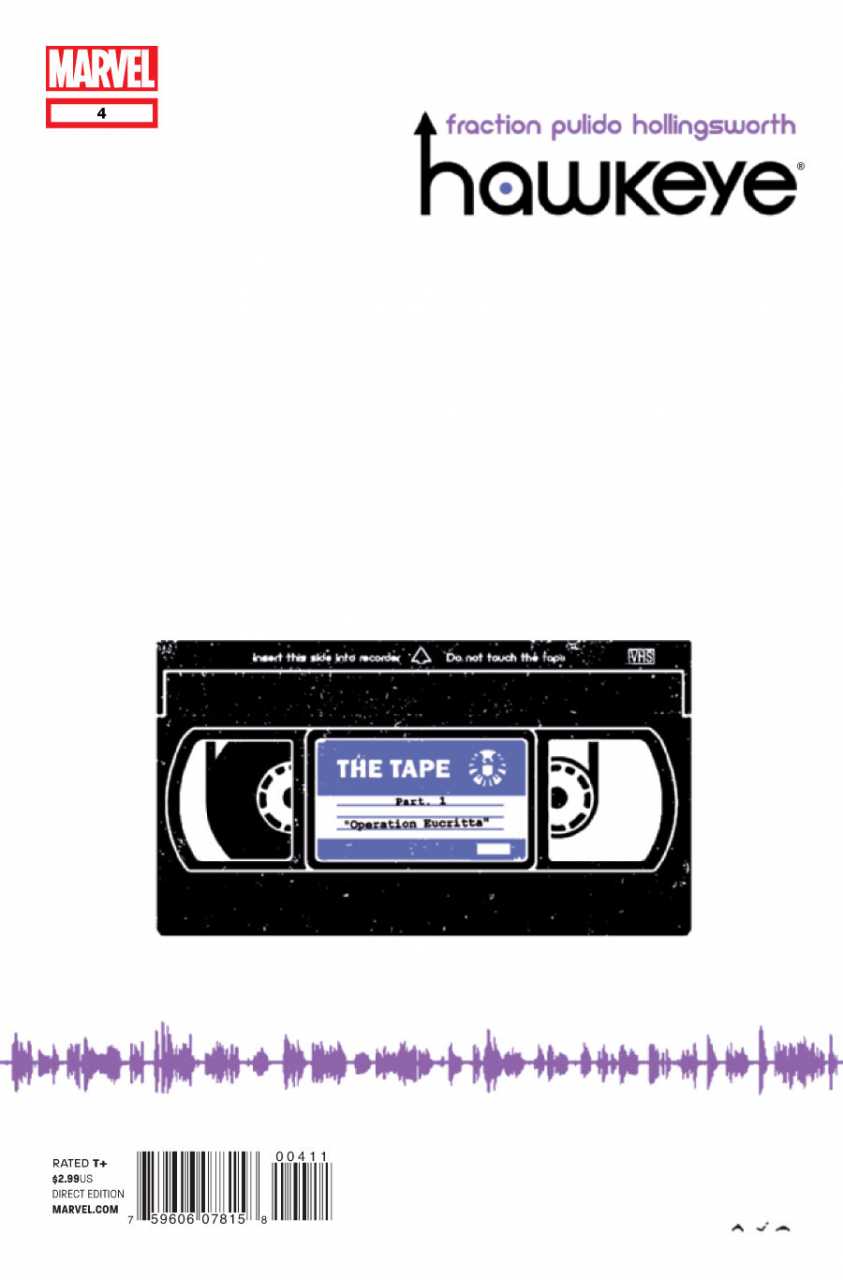 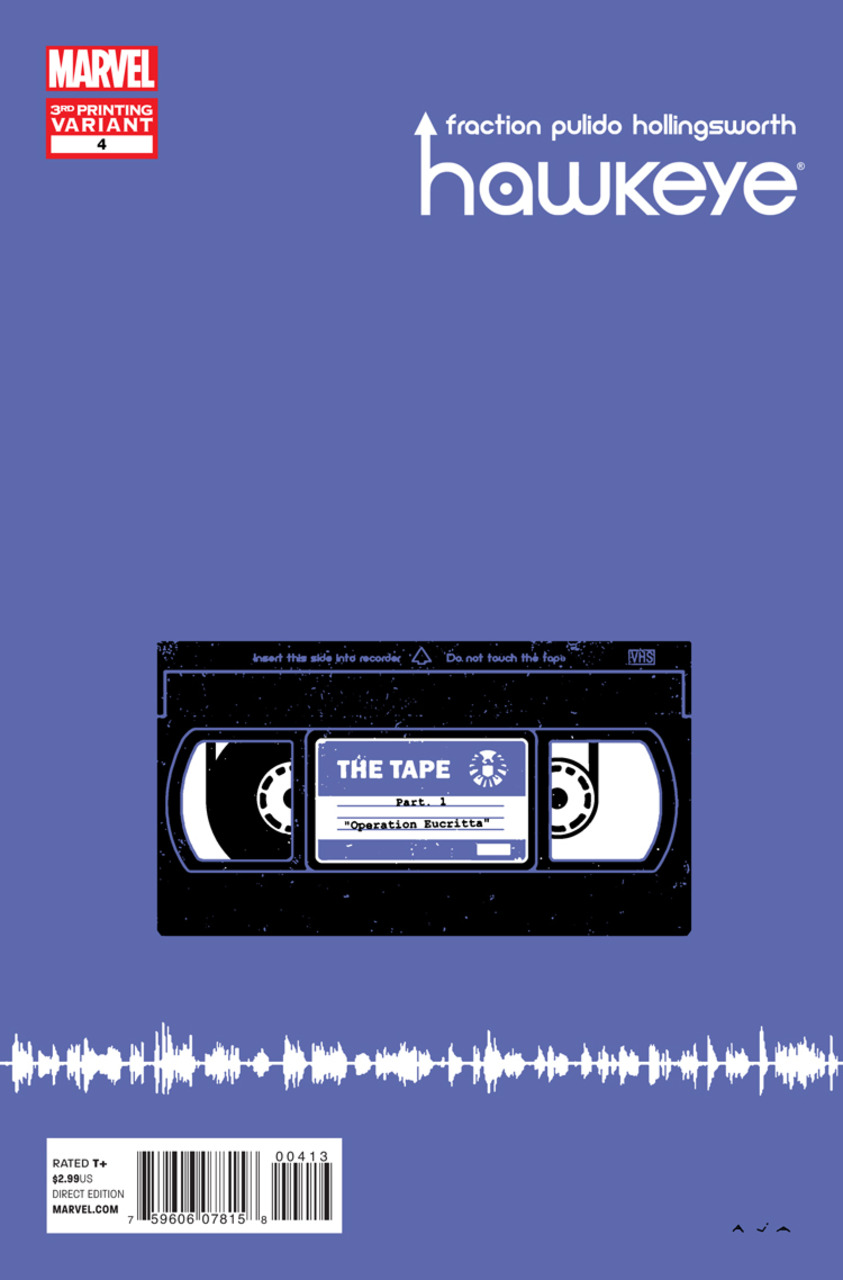 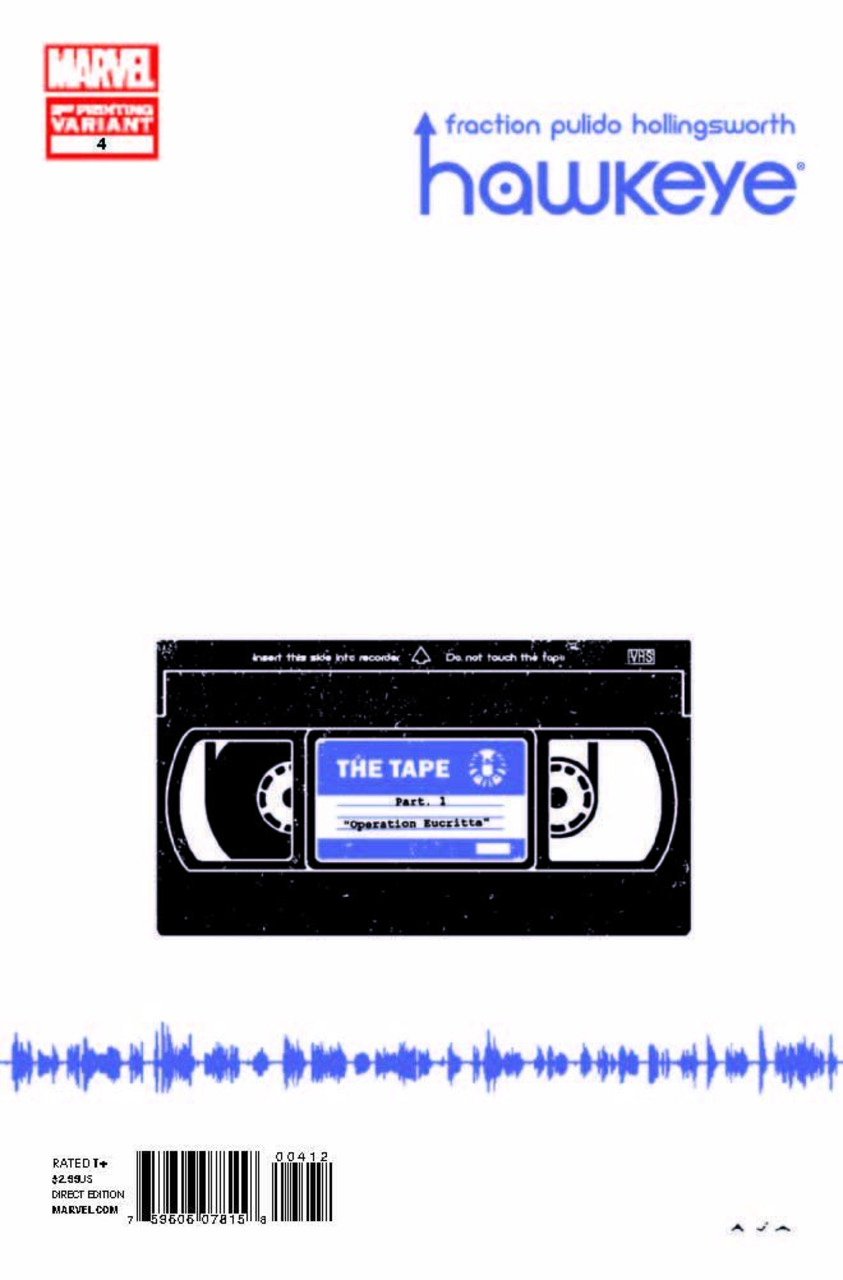