Tommy Preston gains his powers from an ancient Aztec heart of gold. He basically becomes Superboy, with super strength, invunerability, flight, super speed, super smarts, and high voltage vision (x-ray vision). The stories are fun, and Tommy's grandpa is nice comic relief. Unfortunately, the thing I was really left to wonder about is never really addressed in the stories.

Grandpa Preston's antique shop is full of some weird objects with mysterious properties. He bought them from the widow of his friend, Wild Willy Winters, who used to buy the objects from all over the world. This is story gold (if you'll forgive the pun), but we don't get to know any more about Wild Willy Winters, or the inventory of the shop, beyond the three or four items featured in these stories.

If this premise sounds familiar at all, you may be recalling a television horror series called Friday the 13th: The Series, where three people struggled to recover all the cursed antiques sold from their shop, and lock them in a vault. If that show could last for three seasons, then surely there is some story potential in the adventures of Wild Willy Winters! But alas, this is from the Golden Age of comics, so we're long past the chance of the creators picking up on that.

In any event, that is not what this book is about. It's Golden Lad. This book grabbed my attention from the time I first found out about Gwandanaland, because the cover just looks great. I kept putting it off, because it's a smaller collection, and the publisher's info on the book says upfront that the story from Golden Lad #3 is in need of a replacement. They weren't kidding! If you have that issue, contact them- they'll make it worth your while. The GL #3 story is from microfiche, and is hard to read- made more difficult for me, because I'm using reading glasses anyway. However, and I must stress this: the publisher says this upfront in the book info on Amazon. So, I knew what I was getting when I ordered it.

All that said, I'm still giving this the full five stars. It's too much fun not to. 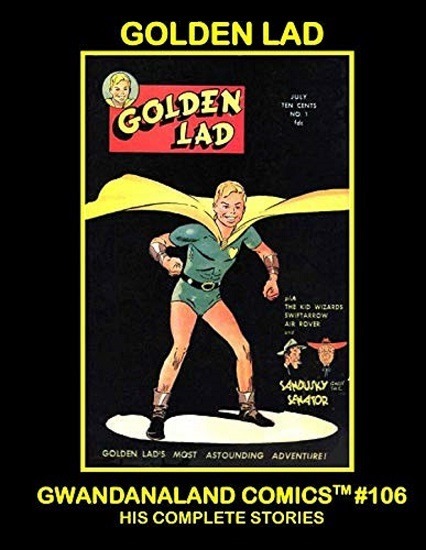