After a string of action centered issues, Nathan Edmondson takes his last issue to tie up some loose ends and give us an emotional action-packed ending to his Grifter run. Even fill-in artist Daniel Sampere does a great job of taking the reigns from Scott Clark for an issue and doing some great work as we see this first chapter of Grifter's story wrap-up.

I have to admit, when I first starting reading the issue, I got a little annoyed at how it started. I knew going into it that it was going to be Edmondson's last issue and I wondered if DC had given him enough notice that he was leaving the title so we could get some sort of closure. The result is a mixed bag as I think its obvious DC told him they were taking him off the book because he shoves a lot into the issue in order to resolve plot lines he'd been laying out. It starts with the death of a character Edmondson introduced and they are taken out very unceremoniously. One could argue that it was done the way it was because of the idea that death is sudden and sometimes it's over quickly without one last speech or final rally before the character dies. But I think here it's mainly because it was something Edmondson had to do quickly because he only had one issue to wrap up a lot.

But on the flip side, I did like where the story goes from there. As the cover shows, Max Cash is still alive, so no spoilers there. I loved the brother vs. brother conflict. I have a brother so stories like this are easy for me to relate to. I will be up front and say it was all resolved very quickly. But for the short time it lasted I did enjoy it. It made me wish that Edmondson had revealed earlier that Max was alive and we had spent the last few issues having the two brothers at odds. I think it would've strengthened all the issues we've gotten since Max was thought dead.

Another thing I appreciated here was Grifter's inner dialogue. I liked it early on in the series but again, when Scott Clark came on the book a lot that was replaced with more action. Here, I actually felt sorry for Grifter and understood how defeated he felt. Everything has literally been taken from him by the Daemonites so now he has more than enough reason to want to hunt them down. This to me solidified his purpose. Before, he seemed to be reacting to the situation and now I feel we may get a more proactive Grifter. Of course, this also depends how much of this development Liefeld will keep in upcoming issues.

The Grifter title started really well for me, dropped significantly into too much action and not enough story, but then made a decent rally here at the end of Edmondson's run. I know Edmondson had planned to be on Grifter longer and I think I can see the frustration in his writing when he realized he wasn't going past this issue. I took this last issue as a "what could have been" issue of sorts. This felt like more of an amalgamation of the first couple of issues but with a decent amount of action as compared to the action-heavy issues we'd been getting. But next month, we've got Scott Clark back on as artist with Liefeld plotting and Frank Tieri assisting with story duties too. We'll see where the new team takes Grifter from here. Hopefully, most of fans will too.

This series which has been edgy and generally leans that way, has also generally never really escaped from the realm of average.  One of the things which I think gave it  better sense of itself was the presence of Gretchen in Cole's life.  Another and one which is visible here is the use of the "Fight through it, I know you are in there" speech to a former ally now being controlled by someone else.  There are some decent and well planned and well executed action sequences here, but they end up b...

Blah. This cover's probably the weakest one yet. Grifter and his brother both look ridiculously over masculine. Their muscles are bulging to the point that they should be bursting from their veins. Apparently the covers are already prepared for Liefeld to swoop in and ruin them, easing us into it. Grifter's been more creative and charismatic; not some macho macho muscle head.This issue could've been great. It made me start worrying again about the new creative team, because its clear that this i... 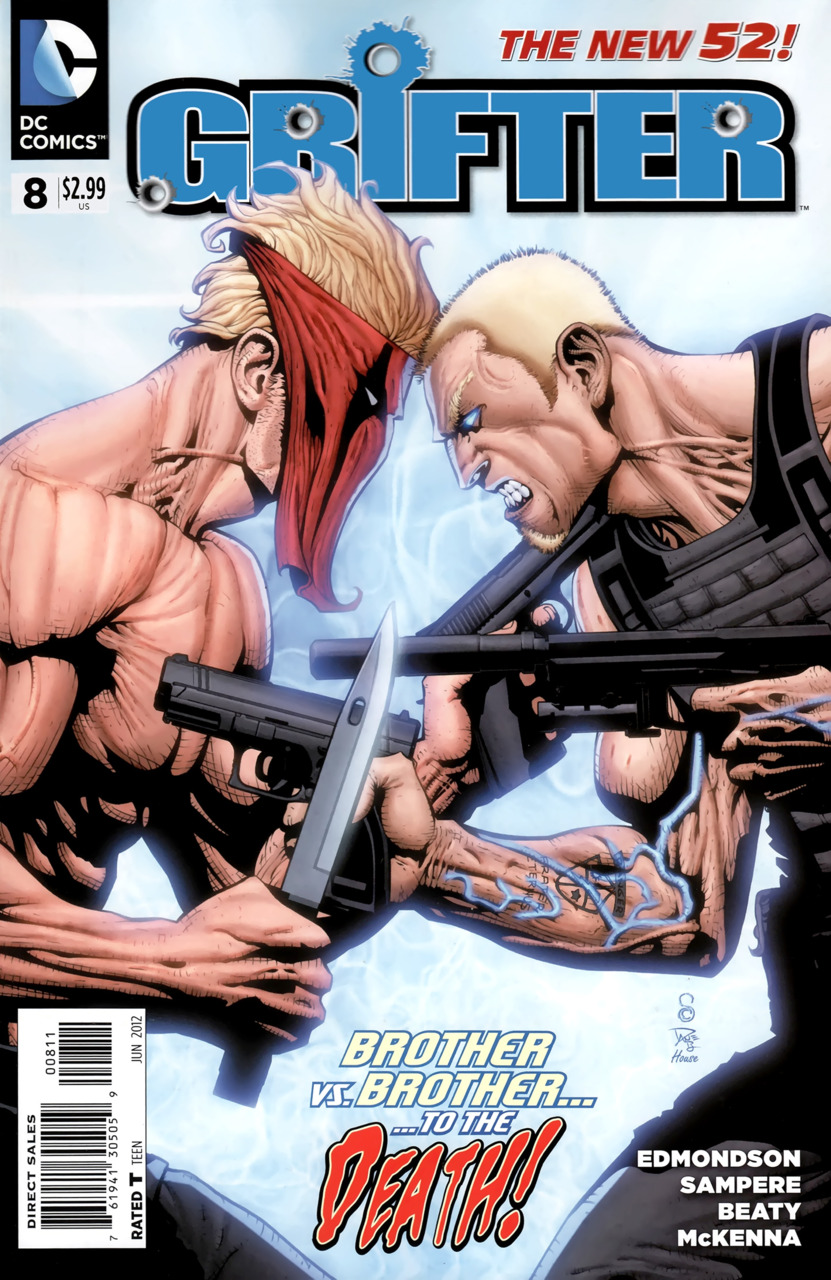