Although I'm not the biggest Green Arrow fan, I have been a fan, and have enjoyed reading him over the years, but from what I've read of this series it's been very poor. Luckily Jeff Lemire took over as writer last issue, and has changed it into a brilliant series, and it's looking to be one of the best Green Arrow stories in the last few years.

With the death of his friends last issue Green Arrow (Oliver "Ollie" Queen) finds help in a former employee named Henry Fyff. Also the identity of Komodo is revealed, and Magus gives Ollie a warning.

This was yet another brilliant issue, and it looks like Jeff Lemire has this series heading in the right direction. I haven't read a great deal of Lemire's work, but I have read a couple of Animal Man issues, and plan on reading Constantine when it's out, but he appears to be one of the better writers in DC the now, and the praise he has gotten from others is deserved. This issue wasn't quite as good as the last issue, but not far behind, and you don't expect these types of issues to be as good as this. When I say these types of issues I mean issues that spend most of the time explaining the background story. Don't get me wrong, I love when a story delves into the background, and overall it makes a story much better in the long run, but having that takes away from the overall excitement in that issue. I have however loved how Lemire's handled the story so far, and I've loved how he's given us the surprises in pieces, leaving some suspense, and mystery to the story.

Andrea Sorrentino once again produced some amazing art on this issue, and I'm happy that he's working on this series. His artwork is simply phenomenal, and he really has a great dynamic style. Sorrentino's art is also brilliant in other ways, as even the finer details are great. I was however slightly upset that he wasn't doing his own colours in the interiors. I understand that it would add onto the time to draw the issue, but his colours in the last issue were excellent, and I always feel that when an artist colours his own art that it looks overall much nicer. The colourist on this issue, Marcelo Maiolo did do a great job, and his colours were also brilliant, but it wasn't quite as Sorrentino's, and it was noticeable (if only slightly) that Sorrentino didn't do the colours. I do however think that the coulour has really helped the art, as although Sorrentino art is already dramatic, the colours add to that, and I love that the monochrome flashback colours make the flashbacks stand out.

Komodo's identity was revealed in this issue. I won't reveal who Komodo is, or spoil anything, as I hate spoiling things, but sometimes it can't be helped. This time however I can keep the spoilers secret, so I will. Komodo was a shocking introduction in last issue, and as I said, I was happy that like Ollie Komodo was an archer. Although I won't spoil his identity I will say that it was a surprise, but not too much of a surprise. I say that as when I found out I wasn't too shocked, but at the same time it wasn't the first person I would have thought of. Anyway it wasn't his identity that interested me the most in this issue anyway, it was his past, and more so his connection to Ollie. Last issue showed that Komodo knew a lot about Green Arrow, knowing that he was Oliver Queen, and who his father is, saying that he expected more, so it was nice to find out how he knew all this. The development of Komodo was excellent in this issue, but I look forward to seeing more of his background (if we get more, which I assume we will) in the rest of this story, and seeing him, and Ollie square of against each other.

Ollie also got a new assistant in this issue. With his previous assistants, Naomi, and Jax being killed in the Q-Core building (apparently) Ollie decided to trust another to help him, former employee Henry Fyff. Having not read much of the series prior to this I haven't became attached to Naomi, and Jax as characters so it will probably be easier for me to accept a new assistant than some readers. Anyway from the little I did read of the other characters I already prefer Fyff anyway. He's a very funny character, and I think he will keep Ollie on his toe's. I also look forward to seeing if there is any backlash from Fyff over the fact he was fired. From his funny appearance in this issue, I'm looking forward to seeing more of Fyff in this series, as he adds comic relief to a mostly serious story.

The mystery in this story just keeps getting more interesting. Besides the identity of Komodo being revealed in this issue, it also delves into more secrets in Ollie's past (or should I say his fathers). The mysterious Magus character has been very interesting, and although I liked finding out about Komodo's past, I feel that Magus' will be more interesting. I am however really hooked to this series, and hope that Lemire continues this good work after this story.

I'll finish by talking about two minor points that I liked about this issue. The first one is that it was nice to see that the issue acknowledged that he's a member of the Justice League of America (or going to be). It appears that most of the JLA members will be acknowledged as becoming members in their solo books, as Vibe, and Katana have their own series out of JLA, Catwoman's getting a visit from the JLA soon, and Hawkman apparently is also getting help from the JLA before his series is cancelled. It was a big change to the New 52 adding another Justice League, and although it was built up for the better part of a year it is nice to see it acknowledged in the solo series. At the same time I'm happy that it didn't take up too much of the issue, as it'd take away from Lemire's story, which is brilliant.

Like the acknowledgement of the JLA I was also happy to see Roy Harper mentioned in this issue. With Roy being my favourite DC archer (loved him in Red Hood and the Outlaws, and pre-New 52 Justice League of America) it was nice to see him mentioned, and having not read much of the series prior to this I don't know if he's been mentioned before. As I said though I having been reading him in Red Hood and the Outlaws, so I know that the rift between Ollie, and Roy has continued into the New 52, and it was nice to see that Ollie is upset about what happened between the two of them. Again like the JLA acknowledgement I was happy that this didn't take up too much of the issue.

Lemire continues to turn this series into a respectable series again, and this issue was fabulous. It was very interesting, and fun, and although it wasn't quite as good as the last issue it was still brilliant. I'd recommend both this issue, and the last issue, as Lemire has really changed this series for the better.

Other reviews for Green Arrow #18 - The Kill Machine, Part 2

Since the start of the series back in 2011 the whole thing was a big mess and you could never really enjoy what was going on.You could say that the character of Ollie was kinda ruined.The things that were going on were just not in place but after the arrival of Jeff Lemire on the book things changed.Everything was turned around in the good way and things just started clicking again.He builds up that story that made Oliver Queen a great character back in the past.He isn't trying to make just some...

PREFACE:Last issue saw the great restart to the new 52's take on Green Arrow. Jeff and Andrea have started out strong, but can they keep up the pace. We see more of Ollie's future as well as his present, as he is being hunted by not only Komodo but the Police as well. Can the Emerald Archer make it out of this hot predicament, and what secrets lie with the Island, some questions might be answered sooner than others, but on to the review.PLOT:SPOILER WARNING: Click here to reveal hidden content.W... 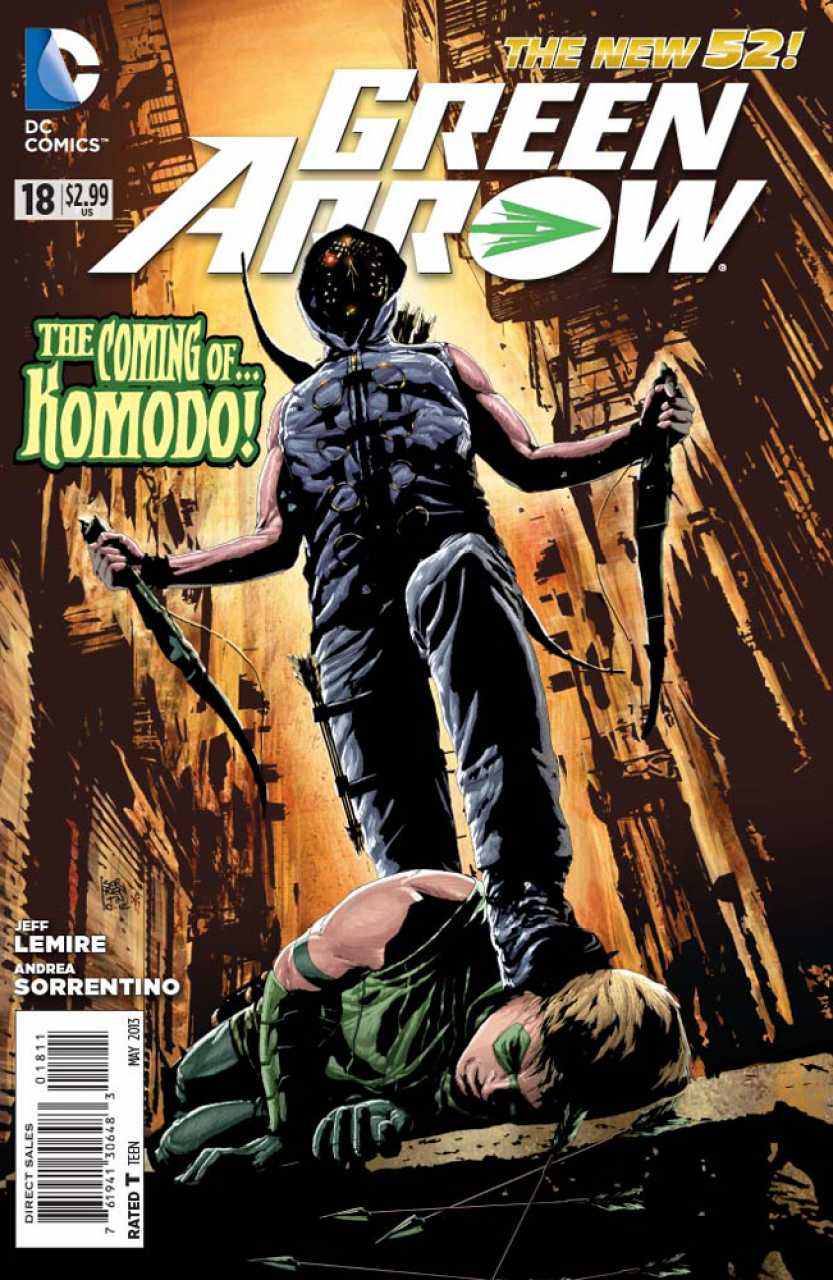 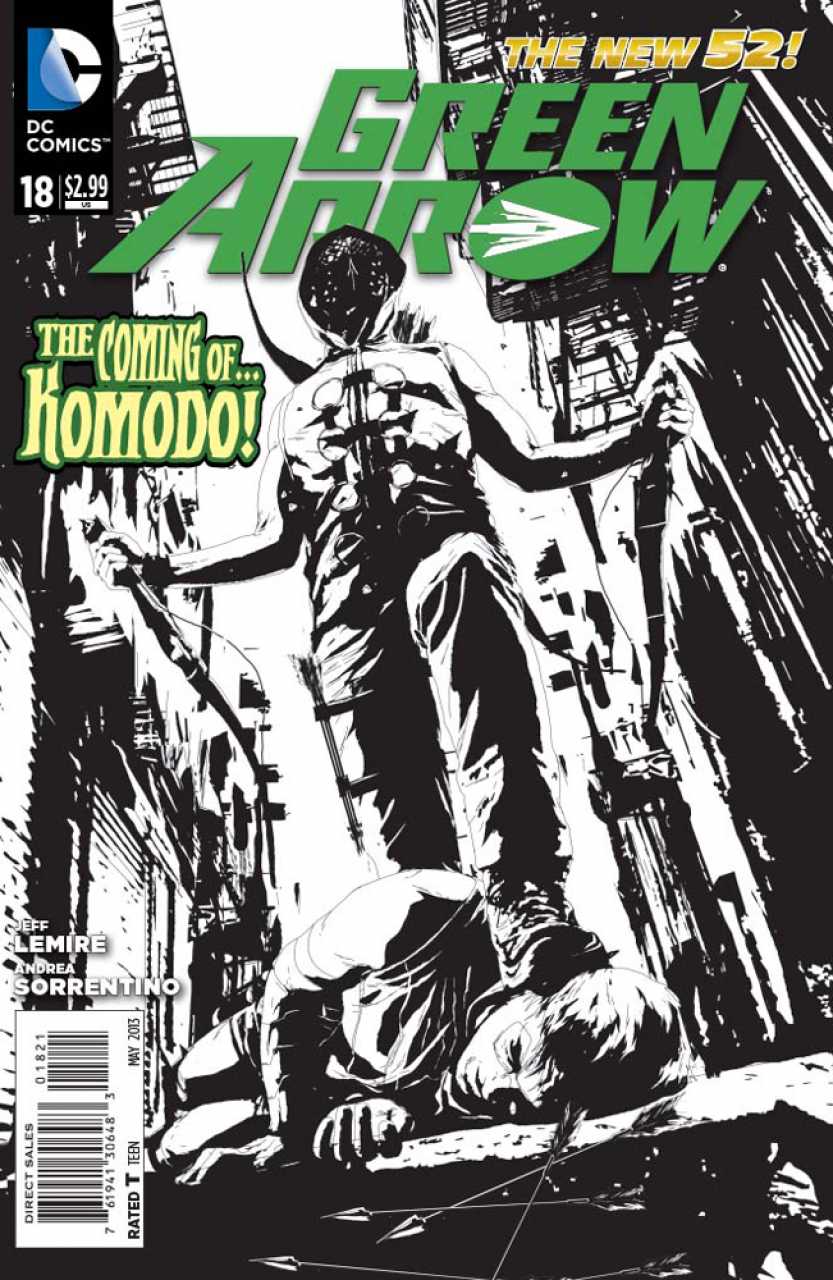