As the title suggests, on the surface this is pretty generic comic book.  I, however, found it anything but.  Yes, it has the "down on his luck" main character with everyday problems.  Yes it has basic street thugs and a typical villain.  And the origin was pretty simple. What I found interesting was how it was done.
I enjoyed finding out what the hero could do along with him.  Reading from across the room, breaking down doors (poor Dad), catching the bus without ruining his best suit.  Going costume shopping with no money for anything flashy.
The villain was nasty in his mesmerizing role.   An inventor of marginal success, he made his own hypnotizing weapon and took out the hero with ease in there first encounter.
I liked the way this normal guy turned not-so-normal used his head to beat the bad guy.  It wasn't all just "jump down and punch him out" action, though there was a good amount of that, it was the inventiveness that helped him win.  What really got me was the end, since this is a one-shot deal I'll never find out how the hero handled himself after his first big battle.  Did more villains find him?  Did this first one return?  Is his brother ok?

All in all, this was a fun read and if you ever see it in the bin at your local shop I would suggest picking it up, I'm sure this underrated gem won't be more than a quarter.

Other reviews for Generic Comic Book #1 - A Superhero! 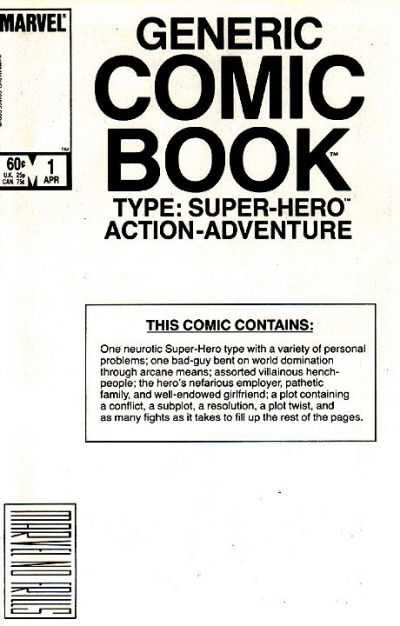