Is the Guard coming back together?

Or maybe some Achilles/August Action?

@august_hearst: I'm working on a Guard comeback but a lot of the members aren't around, LOL. Paragon is a little burnt out, Duchess is nowhere to be seen, Mercy will never write again, so we'll see! We're getting a new member though.

I'll shoot you a PM soonish.

Bet bet bet, I need to use August more anyway.

Lookin forward to it. 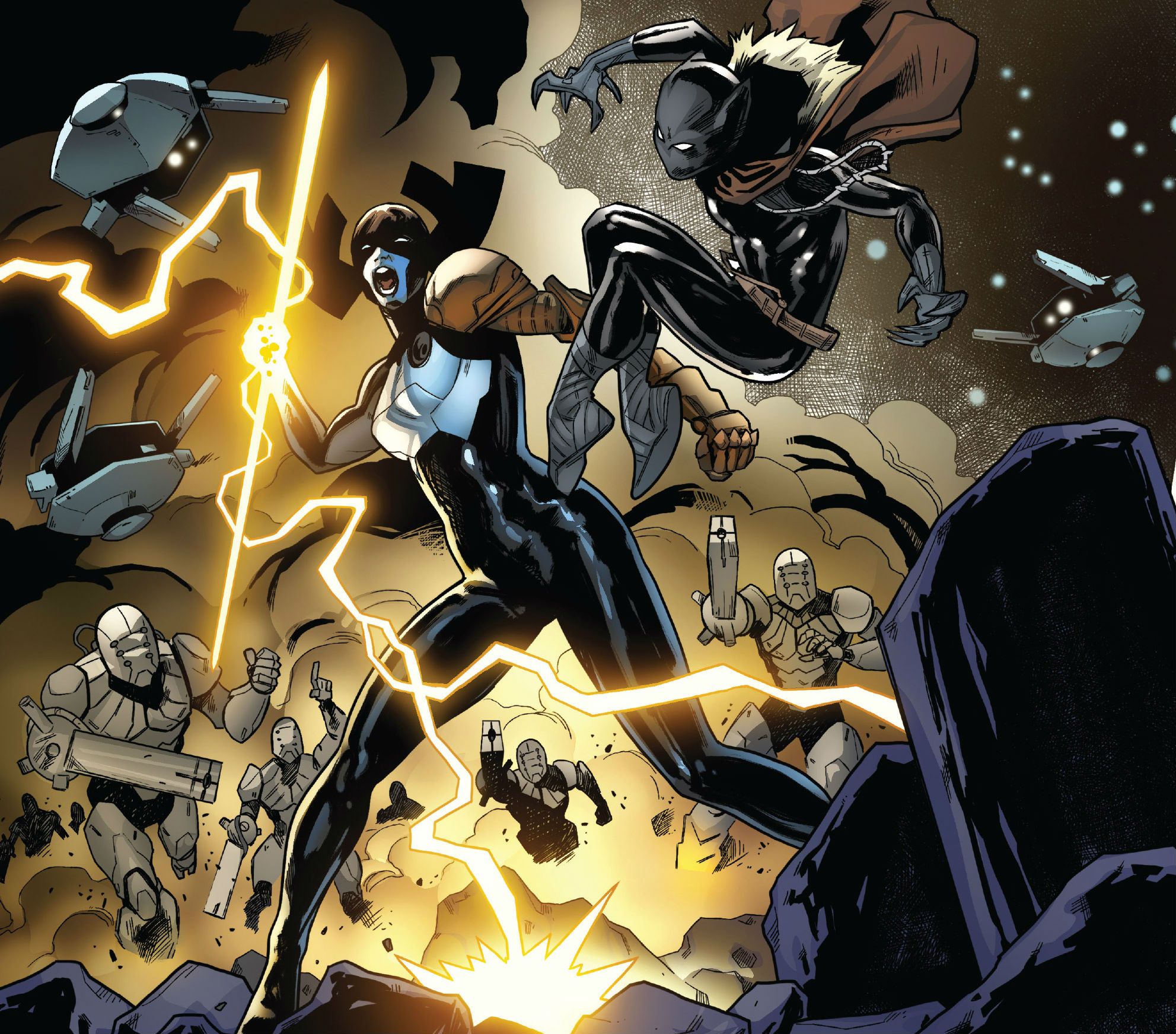 NASA had been tracking the object for several days, since the moment satellites had detected it and calculations determined that it was on a likely collision course with the planet. Their attention was more a matter of scientific curiosity than genuine concern, as it was quickly determined that, at its size, the object was virtually guaranteed to burn up in the upper atmosphere and pose no danger to the planet itself. By the time the "asteroid" had entered the atmosphere, the sudden alarm over its apparent refusal to disintegrate was compounded by the fact that it also appeared to be slowing down, as though preparing for a landing. At this point, aside from making a somewhat panicked call to NORAD, there was little to be done to prevent an impact.

The invader, however, had other plans.

He descended over the downtown area of Expendaville at the height of rush hour. As there had been no time to send out an alert, the citizens' first warning of the arrival was the arrival itself, as what appeared to be a powerfully built man in a curious sort of caped uniform dropped from the sky to hover a mere dozen feet over the congested streets, causing vehicles to skid to a halt and engage in more than a few confused collisions.

As drivers and pedestrians either gaped in shock or dove for cover, the being known as the Deadsun swept them all with an imperious gaze, before presenting them with a smile that most would describe as perfect, save for a complete lack of human warmth or emotion behind it. He spoke, his booming across the suddenly silent street.

At this point, confusion gave way to full panic in downtown Expendaville. Civilians fled as police took aim and opened fire on the cosmic construct, their bullets seeming to cause him no harm beyond mild annoyance, which he responded to by launching beams of fiery radiation from his eyes, instantly incinerating the attackers with the heat of a burning star.

"I see that I must convince you."

@adam_grimm: This is only the beginning...

This open or closed?

Should be a fun read.

August Hearst stood outside the legendary ship Aurora as he looked upon the chilling Antarctic sky as a soft chilling breeze brushed across his skin and snow grazed his face. August has always loved the wind be it the bleak, thin wind that it was, like a fine sour wine, searching the marrow and bringing no bloom to the cheek, but a kiss of cool air to the shoulder.

The Prince of Thunder had been on this foreign realm for several months now, his days had been full of grand adventure and bouts of heroism with his fellow mates, and while initially, he had felt like the outsider to a strange new world, he had grown accustomed to Earth, due a great deal to his friends and allies. He had chosen to live his time in Midgard protecting those who couldn't protect themselves, fighting the battles most wouldn't fight, and doing the things that most wouldn't do...

So when the computers in the ship sang of danger in the town of Expendaville, August turned.

And in a flash of lightning and the crippling roar of thunder, The Prince Of Thunder was gone.

The streets of Expendaville screamed as simple pedestrians sprinted away from the self-proclaimed "god" his beams of radiation causing little doubt that they would perish due to any confrontation with the alien.

August however, did not feel the same

In a short blast of electricity, the Prince would be standing in the streets several feet away from him. His mighty weapon in hand and draped in his mighty Asgardian armor.

And with a blink of his eye the environment began to shift and change, the weather bending to the will of the Prince of Thunder.

The city began to settle into inky darkness that sank into the marrow of one’s bones. This was followed by attacks of lightning on the streets, and steadily made its way from one end of the city to the other. Sometimes flashing bolts of pure energy seem to stand for long moments around certain buildings. Temporarily, they held prisoner all the people inside -Though ignoring the ones running away- turning into dangerous cell bars of heated light. Count one, count two, count three, then, came explosions of thunder in great waves of discordant and demented sounds. The noise level became so intense that it shatter picture windows, and made each person tremble inside his chest cavity. The wind raised to the level of a thousand howling hounds. No one seemed able to speak, because fear transformed intelligible words into agonizing moans and groans.

"I see that I must convince you."

He said. Hoping to terrorize his victims. Wishing to spread his will upon the helpless people of the city.

"No. You must convince me."

Hmm...not the one I was hoping for...and clearly not a Ninjan...

The nuclear-powered narcissist gave his foe a gaze with all the cosmic arrogance of his own creator. He had hoped to draw his erstwhile nemesis, Achilles, into combat by attacking what was, to all appearances, a primitive planet. His disappointment was only momentary, however, as the stranger's impressive entrance and display of obvious power singled him out as a truly suitable foe. After all, he mused, no great conqueror would forge a legend by crushing mere vermin.

"Don't convince easily, do you?" Mockery dripped from the cosmic construct's voice like venom, as he dropped to the ground, laying his hand on one of the many abandoned automobiles. "Well then, consider this my opening argument!" Without further ado, the Deadsun flung the vehicle as though it were made of paper-mache with deadly velocity towards his enemy. As the unfortunate object flew towards its target, a quick blast of radiation from the Deadsun's eyes turned it into a flaming projectile of shrapnel and burning fuel.

The Prince of Thunder stood in the booming city with a warriors' gaze and a hero's might, his hand gripped his mighty weapon Dáinsleif as he walked forward edging closer and closer to his foe. Electricity unlike anything ever seen before by man rippled off the son of Thor in waves as if the god himself was a conductor to every sizzling bolt. His cape writhed like a strangled serpent in the wind, and his armor gleamed.

His opponent was less dazzling, garbed in red, white, and blue and bearing a striking resemblance to August's best friend and Battle Brother Achilles. This caused the god a momentary glance of confusion and he would raise his eyebrow slightly.

"Don't convince easily, do you?"

His voice cut through the air like a blade, malicious in nature, August watched as he clutched a nearby automobile and picked it up with ease, and then he launched it with speed rivaling a bullet, even going as far to use his nuclear vison to turn the car into a massive fiery inferno hurtling straight towards him screaming at the god.

"Well then, consider this my opening argument!"

Slipping hand into the string of his hammer he would begin spinning it with spins that outclassed tornadoes, destroyed sound and battered the explosion that drew towards him. August had toppled jötunn's and felt the heat of the sword of Surtur hailing from Muspelheim, a little car explosion was little in comparison, though there were civilians behind him still fleeing and the god of Thunder couldn't risk them getting hurt.

As the explosion dissipated from the wind of August's spin, the Prince of Asgard would say quietly, "Threatening and hurting civilians is disgraceful, here, let me repay you." Twisting and switching his grip with a masters handle he would line up sights with a nearby vehicle, and with one mighty twist of his wrist and blow of his hammer August would send the car hurtling towards Deadsun with extreme force.

This one does not disappoint.

The Deadsun watched impassively as his enemy made short work of his projectile, spinning his curious bludgeon in a manner that seemed to to effect the very meteorological patterns of the planet. Hmm...a weapon. I should find myself a suitable weapon.

His internal monologue was disrupted, however, as his divine antagonist launched an attack of his own, sending another of the world's primitive vehicles tumbling towards him at a dizzying speed. The artificial demigod was not created for defense or evasion, his instinct was ever to attack, attack, attack! Even when facing aggression, his tactics were ever geared towards regaining the advantage. Launching himself forward with titanic force, he met the hurtling car in midair and grasped it, holding it before him as though it were some manner of improvised shield as he sought to meet his foe in melee with an aerial charge.