That first week of November is now passed in a flash of flame. Well that’s how mine went, mostly because I was burnt at the stake at my town’s Firework Festival. A liberal amount of fire was just what the doctor prescribed for last week’s animal, the macabre body armour of the Corpse Assassin Bug. This week’s animal also hates fire but for a whole different reason. Calamari anyone?

Related Species - The Humboldt Squid is one of twenty species in the family Ommastrephidae, a group commonly called ‘Flying Squids’ after observations of shoals escaping from predators by jetting out of the water (1)

Humboldt Squids, named after famous Prussian Naturalist Alexander von Humboldt, is a large squid with a mantle length of 1.5m and a total length of over two meters. The species, like all squids have eight arms and two long feeding tentacles, all of which are lined with sucker rings, which themselves are ringed with jagged ‘teeth’ for shredding prey before it reaches the squid’s formidable beck. Humboldt Squid are a shoaling species and have been seen in shoals of over 1000 animals (2).

When in a shoal Humboldt Squid continue signal each other by flashing colours on their flanks, usually white to red. It is theorized that the flashing acts as a lure for prey while hunting in the deep sea, or at night near the surface. While formidable predators in their own right Humboldt Squid are preyed upon by Sperm Whales (Physeter macrocephalus), large sharks and billfish not to mention human fisherman.

It is from fisherman that the squid’s aggressive reputation is recorded, with hooked animals fighting desperately to free themselves only to be attacked by the rest of the shoal. More recently a pair of Humboldt Squid attacked a Greenpeace submarine and there are several serious reported attacks on divers (3). Yet despite the seemingly aggressive nature, the cause of the attacks seems to be flashing lights, and there are just as many accounts of divers swimming with shoals of Humboldt Squid and not being attacked at all.

Like all Cephalopods Humboldt Squid live short lives, with most individuals only living a single year.

In their native range some local fisherman would rather swim with sharks then enter the water with a shoal of Humboldt Squid, nicknaming them Diablos Rohas due to their aggressive natures and flashing colours

Despite this there is a growing demand for Humboldt Squid in fancy restaurants. Between 2005 - 2006 between 55 and 60 thousand tons were landed in Mexican Waters alone.

While fishing removes a massive amount of the population, the number of Humboldt Squid is booming thanks to increased water temperatures that have allowed them to massively expand the range they live across.

Some deep-sea squid are even stranger then the Humboldt Squid. One species Octopoteuthis deletron practices a unique hunting strategy called ‘Attack Autotomy’. When threatened the squid will brake off an arm tipped with razor like suckers, which then wiggles towards the predator and slowly rips it to pieces, so that the meal is ready to eat when the main body of the squid returns.

And there we have it, the great expansionist and aggressive predator known as the Humboldt Squid. Next week despite the fact I'm on holiday in Slovenia (those Olms be tripping) there will be a new issue featuring a reptile that shouldn't be able to climb…but does. Until then comment, critic and check out the Bestiary of Past Issues if you feel like revisiting an animal that you may have missed.

Hmmmm this sounds like an interesting animal. With the use of morse code and all(well not morse code really since they use colors

@johnjo719: Yep delicious too. Thanks for the comment and feel free to check out some of the past issues if you like. :-)

Hey, my 2nd cousin was on that Greenpeace ship...it happened off the coast of Alaska, I believe. So, I guess I feel like I have a connection to it. Naturally, I plan to write a novel where I hunt it down and seek vengeance on it, because I don't think anyone has ever written a novel about a guy obsessively seeking revenge on marine life before.

Humboldt is such an unsuspecting name for an often aggressive animal as well. It's like if you were a world renowned, vicious mercenary named Dudley Summerbiscuits.

@impurestcheese: Have fun in Slovenia!

@cattlebattle: Nope and definitely not one set in Nantucket LOL. And Ooh Summerbiscuits LOL

@squares: I already am (this issue was written last week)

@impurestcheese: I never knew squids could be so dangerous. :O

Anyway, what will next week issue be about?

Ooohh hehe, this is a squid i could get to liking here.

@dboyrules2011: A Turtle that climbs trees

@impurestcheese: A turtle that climbs trees?

Sounds very good. Will be looking forward to it.

@dboyrules2011: It will be hopefully

I remember watching something about them being smart enough to try to pick locks on either Discovery of Animal Planet.

@impurestcheese: Wow, you used these in a story recently. This makes them sound even worse than the story did. :)

@impurestcheese: Saw these guys viciously attack the divers on the show Wild Boyz, but the divers were wearing bright yellow protective gear to attract them.

@squares: Cave diving tomorrow. Going to look for some Olms

@ostyo: That's akin to rubbing yourself in cobra pheromones and jumping in a box of mongeese. It multiplies the risk beyond what is safe

@cbishop: Thanks for the comment. And yes I was playing the aggressive side up a bit although divers have almost been drowned by Humboldt's working as a team to drag them down

@cgoodness: There is definitely intelligence being used by Humboldts when they launch coordinated attacks on large groups of prey.

@impurestcheese: its scary knowing they are that smart and vicious

@cgoodness: That and the fact that they have all the advantages in the water

WHY ARE THERE SO MANY NOPES UNDER THE SEA?

@impurestcheese: that's why I don't swim in oceans :/

@impurestcheese: Well, these are the guys from Jackass so intelligence is not exactly their strongest point.

@darthaznable: Because living in the ocean is a lot tougher then Sebastian would have you believe

@cgoodness: That's why I do

@ostyo: Ah it's those guys.

This is why I travel with orcas.

@ms-lola: Thanks for my new Rock Band band name! "Now opening for Nickelback at the dilapidated fairground pavilion where terrible bands earn $25 or their weight in cotton candy, Travels with Orcas..." 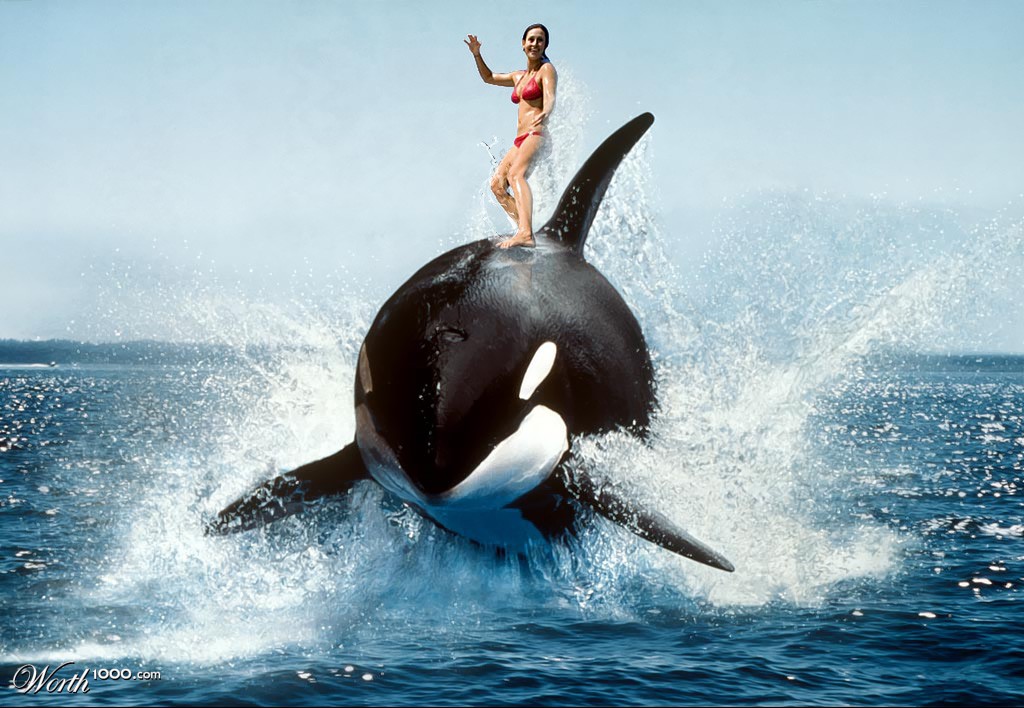 @ms-lola: No one posts pictures of themselves riding Nickelback. Not ever.

@neghead: You would think that but no

@ms-lola: That would explain the maniac I saw while radio tagging Orcas in the Hebrides last week