Pay your respects to the deceased here, as well as gifts, memorials, and more.

(tell me if a notable user has recently left and I'll add them, or if one has returned and I'll remove them)

Static deserves number one. He was one of my favorites. 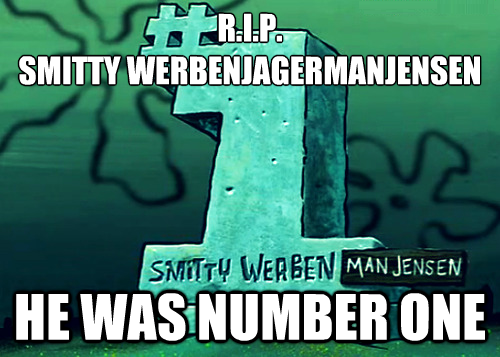 Whatever happened to cyberninja though? Him and I used to talk a bit when I first joined.

@YourNeighborhoodComicGeek: Are you including banned members too?

Just because utoheg was banned, instead of leaving.

That is petty, LOL.

You ain't the only one

I was gone for a whole 2 days!

NicktheDevil joined the Navy, because he was infatuated with se(a)men.

@thespideyguy: Did he leave? I saw his poll but he didn't do anything from what I know.

Yeah he had to go to a year-round boot camp because of his mother.

@YourNeighborhoodComicGeek: I was hopping that he would ask his parents to seek counseling like some users advised in the thread. I guess it didn't work out.

@CaioTrubat: Yeah he did a last update saying he was going the next day. I hope he returns after a year at least.

First, I know nobody made me click on this thread or reply, you're entitled to create whatever thread(s) you like so long as they are within the sites guidelines, obviously you know this. And people can post any comments they wish to anyone else. That's out of the way.

No offense but this thread seems unneeded and pointless (not that this is the only one on CV, mind you). There's already a People Who Left Comic Vine That You Miss... thread (which unsurprisingly you also created), that people can go on and weep to their hearts content or leave "items" for people who are no longer here. Now, some of these people left of their own free will, they chose to leave, so why the hell does anyone want to remember them, in addition put them on a pedestal (which no one here deserves IMO)? They wanted to leave so just let them go, move on. I didn't know any of them well, but some seem to be highly regarded, and if you were close to them then you'll know how to contact them outside of this site (some even stated this when they left, just another classy move), if not well... clearly you weren't thought of much by them. Sad truth people. Best of luck to them in their lives doing whatever it is there are doing, though.

As for the people who were banned, they should be remembered even less, except as notice of what not to do on this site. If you break the rules, you're going to be gone, and if you do then good riddance. This site won't shut down because someone leaves or is banned, though I have witnessed some who thought it would. Trolls or rude people shouldn't be celebrated, that sets the wrong example for the rest of us. Some might claim they were unfairly banned, tough luck. Either create another account or just deal with it. The site has rules, if you're too much of a badass to comply with them, or think you can skirt around them, it is only a matter of time before you get caught.

A few of these of these people also have a reputation as being jerks and/or elitists (to put it lightly and most respectfully), so again why should people revere them? Trolling threads, being disrespectful to other members, or thinking of yourself as better than someone else, is despicable behavior, not envious in the slightest nor what should be promoted.

If you choose to leave this site, bye. No one member is bigger than Comic Vine, though a few might and have disagreed. I just don't see why sending a person a PM or leaving a message on their wall isn't as good or better than posting in either thread (it would be more personal and from the heart), unless of course the idea is to publicly praise someone else, maybe in hopes that they see it or that someone else does. Who knows they might even agree with you! OH BOY! This thread could also give new members the wrong idea, the one that any or all of these people deserve to be remembered, when in fact what you'll be doing is focusing on their positives and ignoring the negatives. That's no way to remember or even respect the "dead." I can't guarantee you this, but I would bet that the majority of people listed wouldn't carry if they were completely forgotten. Unless of course they're narcissists, which they very well might be.

Note, my attitude is not directed at anyone listed in particular, but rather is more of a general opinion of the "hero worshiping" that goes on here, and as such applies to current members as well. Nobody on this site should be feared, insulted, or idolized. There's a lot of fantastic people on this site, some who go unrecognized for their contributions. We're all here because we choose to be, if you're doing something on this site for praise or points, then you might be here for the wrong reason. Just a tad bit of advice.

I'm done pissing on the memories of the "dead", so carry on.

@Xanni15: Right, there is not much point for two, seeing as this one is more recent and nicer thematically I will lock the other.

(tell me if a notable user has recently left and I'll add them, or if one has returned and I'll remove them)

Cyberninja I remember but who the hell are these other folks?? How were they "notable" exactly??

Don't forget progenitor. He pops up every few months to join tournaments but never actually competes in them or posts again. Sigh...

#28  Edited By Jonny_Anonymous
@turoksonofstone: Really? You don't know who Sexy Merc, Static Shock and Morpheus are?
9 years ago

Yeah, I had to disappear for work stuff, but I'm back. :)

Glad to see you back! I missed your specific type of crazy :P

The same, but with less debating and more off topic.

I was going to debate Batman/Selina vs Hawkeye/Black Widow, but you killed my entire argument in one post without even trying. :P

@Decoy Elite: I'm starting to love the Off-Topic as well. You'll see a lot of me there.

Aww Shucks XD I can't help I love 3 out of 4 characters involved :P

I was so confident in Hawkeye, but then I saw you say he wouldn't be able to hit Batman reliably and I knew my entire argument was doomed.

@Decoy Elite: it could be argued, but a loosing arguement. Bruce is just too fast to get tagged :/

Believe me, I understand. Everytime I use Clint I run into the same brick wall :/

I really miss Static. Such a cool guy.

This was actually a remake/reboot of that thread you mentioned. I felt that it was rushed and wasn't as organized. That being said, I disagree about "moving on" about the Viners who have left the site. Sure, some of them were banned, but that doesn't mean that all they did was wrong. Plus this isn't the "greatest viners" list. This is a list of the Viners who are no longer on the website, including the banned, unlike my old version of this thread. Also, if a Viner leaves, sure, we have to "move on", but we don't just forget about them. That is what this is for. We all respect what they want to do in their lives after they quit Comic Vine, but this is a thread to respect what they did do when they were on Comic Vine.

@RazzaTazz: Thanks for locking it I was actually going to ask a moderator to do that for me, but I didn't have the time.

How can anyone Morpheus?

He was a ball of talking logic!

@Gambit1024: He has an alternate account that he still uses, so he technically isn't "dead".

I know, I was just being facetious

@turoksonofstone: Really? You don't know who Sexy Merc, Static Shock and Morpheus are?

nope. Sexy Merc always had sports avatars if I recall correctly but never heard of those others

Damn. I really like Raiiyn hope she shows up again.

Damn. I really like Raiiyn hope she shows up again.

Primmaster64. The guys been gone for half a year now.