Off THEIR Minds: Can Superheroes that Betray a Team Be Forgiven?

Want us to remember this setting for all your devices?

Please use a html5 video capable browser to watch videos.
This video has an invalid file format.
00:00:00
Sorry, but you can't access this content!

Please enter your date of birth to view this video

depends on the popuarity of the character (out of comics)

depends on how powerful the character is. not a lot of people would give the guy that can pull the planet the stink eye. (in comics)

Depends on the reason for their betrayal. If they were forced to betray the team (mentally controlled or coercion) that is forgivable. If they suddenly feel evil or reveal they were evil all along, then its really bad writing. 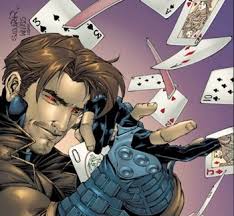 Who could say no to that face?

I get the feeling that Babs has been eating G-Man's snacks again... and he's not happy about it :P

True, it depends how the character betrays em to know if they'll be trust worthy or not.

That last picture. It killed me. So glad you ended with that.

I'd say put the character of ice if they betray the team. I'm sick of seeing the same old heroes getting "evil" and then forgiven in the same page as their betrayal.

I'd say a stint in the Suicide Squad and Thunderbolts teams would make these repeat offenders think twice before betraying the team again.

This topic reminded me of this.

Huh, I was expecting at least one person to reference to Scarlet Witch's betrayal.

But nothing. Not even an addressing of possible betrayal due to intense grief or madness.

Treachery is a common thing in the x men just look at all the traitors we have seen over the years. At least 5 x men have been horsemen of apcolypse.

Depends who it is.

Totally agree with Mr Snyder... Batman can do whatever the hell he wants because he is Batman. Superman can also have some fun being evil sometimes...The rest of the heroes should be careful though...

For this particular topic I think intent has a huge amount to do with whether or not the character should be forgiven. With "Tower of Babel", Batman had contingencies in place in case his teammates went rogue. These plans were stolen and used by Ra's. Batman's intent was to have a plan in place. On the other hand, Gambit took payment to help the marauders murder innocent mutants. His intent was to receive payment in exchange for murder. So I think there is a huge difference between the two. One is a major lapse in judgment and the other is.... well.... MASS #$*%*#$ MURDER.

Outside of the comics , it depends on how popular the storyline is . In the story, it depends on the reasons. You cannot really blame mind-controlled etc guys since they are victims too. But if they go on to betray them out of ...say greed or lust for power , well you probably think twice before trusting them.

Depends...most of the time NO...but in the case of Hawkgirl and Sinestro then YES.

they betray the team in order to protect lives. that's my opinion

Depends on the situation of the betrayal;

Under the influence of 3rd party by drugs, brainwashing (such as Psylocke/Wolverine/Raven) is usually considered to be 'ok' by everyone save when something truly horrible has been committed and the betrayer is forgiven, mostly.

Cracking under the strain of doing what they do depends entirely on the offenses committed, like Stark/Danver's drinking problems, Roy Harpers drug problems and Scarlet Witch/Jericho bouts of insanity. They can be forgiven, but some wont.

Because the betrayer was really evil all along, like Terra I, wont be forgiven, save by those who are utterly convinced (or blinded) of the goodness within the person, even if it's not there.

I'm always a big fan of the betrayal in order to infiltrate enemy territory by going deep cover, then revealing it was all part of the master plan in the end. It's been used time and time again. I think with as much history as characters have individually, forgiveness is solely based on the characters popularity, like Fialkov said.

Mr. Fialkov is saying what we're all thinking.

It's happened a few times but realistically; no.

If it was against their will or a minor betrayal I'd let it pass. Some of these folks do some pretty bad things and are allowed to walk. Normal people would get life in prison for some of the betrayals that have occurred.

More importantly, I learned from autocorrect that I didn't know how to spell betrayal. THANKS COMICVINE!

It's kind of sad that the writers acknowledge that people forget these types of events. I still remember a time when editors would make sure continuity and history is remembered.

do most mutants get their power from mr. sinister?

I'm sorry, will you welcome me back!

They should get kicked off the team and because so many of them do it they can just make a new team of all the betrayers. Then if they do it again they wouldn't have to worry about getting kicked of the team because they all are offenders of that caliber .

Doesn't matter in the end if the character is popular enough outside of the comics or if the company is looking for a big shake up to stir up new or increased sales. Ah, the retcon. Hal Jordan went nuts....oh never mind, he was just possessed.

you snatch, you rat, you wear that jacket.

Treachery is terrible thing, for example Sentinel Prime killed Ironhide and the twins (in the comics) , he can never redeem himself from that. Of course betrayal always seem to be planned to find out the enemies plans and secret

I think most of them can be forgiven if the crimes have not a lot of repercussion. Love Batman's troll face at the end. lol

#36  Edited By Yung ANcient One

Oh I was possessed,

Well they were going to Kill so and so,

Oh, well... actually I never REALLY betrayed you because it was all part of my master plan.

but for me in real life

Your still a Homie(still in the team) but I dont trust you for $#!% anymore.

They all do it! Batman, the DC gang in Identity Crisis, Hawkeye, Colossus, Gambit heck even Jarvis betrayed the Avengers. It's a staple of comics!

@The Black Hood: the fact Gambit wasnt even IN the X-Men when he did that kinda makes the point..moot dontya think? -_-

@The Black Hood: the fact Gambit wasnt even IN the X-Men when he did that kinda makes the point..moot dontya think? -_-

Not in the least. If you found out someone you were hanging out with had murdered a bunch of people would you still keep hanging out with them simply because it happened before you knew them. I don't think a length of time really mitigates mass murder, but when you have someone with Wolverine's body count on your team I guess maybe that's something you're more willing to overlook.

Treachery is terrible thing, for example Sentinel Prime killed Ironhide and the twins (in the comics) , he can never redeem himself from that. Of course betrayal always seem to be planned to find out the enemies plans and secret

Killing Ironhide, no he shouldn't. But I'm sorry... killing the Twins? That man deserves a medal, a National holiday, and a parade in his honor.

They all do it! Batman, the DC gang in Identity Crisis, Hawkeye, Colossus, Gambit heck even Jarvis betrayed the Avengers. It's a staple of comics!

I think that heroes should only betray the team when mind controlled (which I`m getting tired of), if they didn`t really do anything bad at all or when there`s too much of something personal at stake. Otherwise, they`re just being huge jerks.

Who could say no to that face?

I don`t know...He looks like a pretty slick guy. But then again, what hero could be COMPLETELY trusted.

Heroes can absolutely be forgiven after a betrayal. I'm reminded of the very brutal betrayal done by Yellow Jacket in older Avengers books. Hitting his wife, talking mess at his court martial, then sicking a killer robot on his own team was down right diabolical! But if he hadn't been forgiven for such heinous behavior he wouldn't have found his calling as Dr. Pym during his time with the West Coast Avengers which is hands down my favorite incarnation of Ant-Man. I'm not saying that you shouldn't draw a line at a certain point but forgiveness for super humans usually end up making them better heroes in the long run.

Depends what they did to betray the team, if they kill another member then they don't deserve to be forgiven.

I want to know what Brian did to betray Scott Lobdell.

Hehe, wow, still awesome coverage from Wonder Con :) Love it. As for the question...forgive perhaps...forget? Never!

Are they mind controlled/possessed/etc.? Cuz if so that's always forgivable, apparently...

Sinestro in the current GL stuff

@The Black Hood: I Agree