My name is Joseph Milton, most just call me Joe. Don't know if that's my real name, not even sure I have one. Until I was 15 I lived in the Facility, that's what we called it. I was one of a hundred kids chosen for something called project Sparta. It was a simple idea, take infants and raise them from birth to be soldiers.

We weren't super human or anything just well trained. As soon as I learned to walk the training began, combat training, espionage, wet work and whatever other bit of dirty work that might be useful. None of us ever actually saw the field. The powers that be got nervous about the potential public relations nightmare if the project was discovered.

They ordered a clean sweep but they trained us too well. I couldn't say what happened to the others but I managed to escape and I've been on my own since then. I drift from place to place, trying to keep my head down. All that changed about a year ago.

I had wandered into Indigo City and tried to catch a nap on a park bench when all hell broke loose. I didn't see what crashed but I heard the explosion. I turned to get a look just in time to get a lung full of blue gas. I'm not sure exactly what happened. I passed out and woke up the next day to the sounds of screams and confusion. I couldn't stand up, my legs were like loose rubber bands.

I had no idea what was going on but I knew it wouldn't be long before soldiers showed up. I crawled into a storm drain and tried to collect myself. I can't remember how long I was down there, I could hear the panic in the city for sometime. Once I managed to get walking I followed the drain out of the city.

Over the next few months I discover I now had the ability to stretch like rubber. I hid out in a forest while I mastered my new abilities. The place became infested for a while with what they call Blights. They left me alone but they drew soldiers and I had to move on.

Since then I've found that my abilities have advantages. The strength and durability that came with the power combined with my training made me great in a fight. The task force set up to hunt down people like me are persistent but they're amateurs.

I hear stories all the time about people like me getting taken away, even had a few close calls. Its easy enough to slip through the cracks when you can make yourself two dimensional. I never intended to come back to Indigo but as it turns out about a dozen other members of project Sparta happened to be around during the Great Impact and since they're the closest thing I have to family I decided to track them down. Indigo seems like the best place to start looking.

@joshmightbe: I'm tied up at the moment but I'll try to read through this tonight.

Seems like a pretty nice set up for the series.

@joshmightbe: It's a decent chapter, I'm just not really sure what to make of it. A lot of it will depend on how you incorporate Project: Sparta to the main storyline. Still not enough to go on for me to give a detailed comment, but I'm sure you'll figure it out.

@dngn4774: Its just the prologue, more detail will be added later. As for project Sparta, I don't see it being a huge deal for the rest of the world. There were only a hundred subjects, not all of them survived when the project was shut down and only 12 were affected by the Great Impact. At this point there's no telling if any of those 12 other than Joe survived or became blights.

@joshmightbe: Gotta do a few quick chores. Will read in a few.

@joshmightbe: Awesome. Excited to hear more. So how old is your character now?

@joshmightbe: Cool. I assumed 25-30 because that's like an average age for drifters, it seems.

@joshmightbe: Joe the rubberband man. Like Mr Fantastic if he went to Westpoint instead of Empire State :)

@batkevin74: Tho hopefully my guy comes off as way less of a douche than Reed Richards.

@batkevin74: Not as bad as 616 Hank Pym who's been dogged relentlessly over 1 accidental backhand for decades while many "Heroes" treat their wives way worse and nothing gets said. Like for instance when Mocking Bird told Hawkeye a supervillain raped her and he called her a liar and bitched at her about it.

@batkevin74: Not as bad as 616 Hank Pym who's been dogged relentlessly over 1 accidental backhand for decades while many "Heroes" treat their wives way worse and nothing gets said. Like for instance when Mocking Bird told Hawkeye a supervillain raped her and he called her a liar and bitched at her about it. 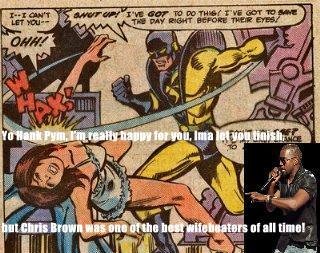 Cool intro. And another great idea. Someone with with advanced abilities (in this case fighting) who is altered by the gas. Trey cool.

Added to the 5th Column Comics Library. :) [The look is temporary, and will be overhauled in the next few days]

@joshmightbe: Great start, just jumping right in. I may have to alter the "Joe" logo a little.