Teddy vs. Andy, the two baddest-assed US presidents are out for blood! Ten minutes prep, open street. Three rounds: Round 1, both unarmed. Round 2, Jackson gets a cane and Roosevelt gets a short bat. Round 3, both get single-shot pistols.

I would pay to see this.

On-Topic, I think Theodore wins all three, but does not stomp.

But it's irrelevant, Uncle Sam (DC Comics) trumps all the presidents simultaneously... 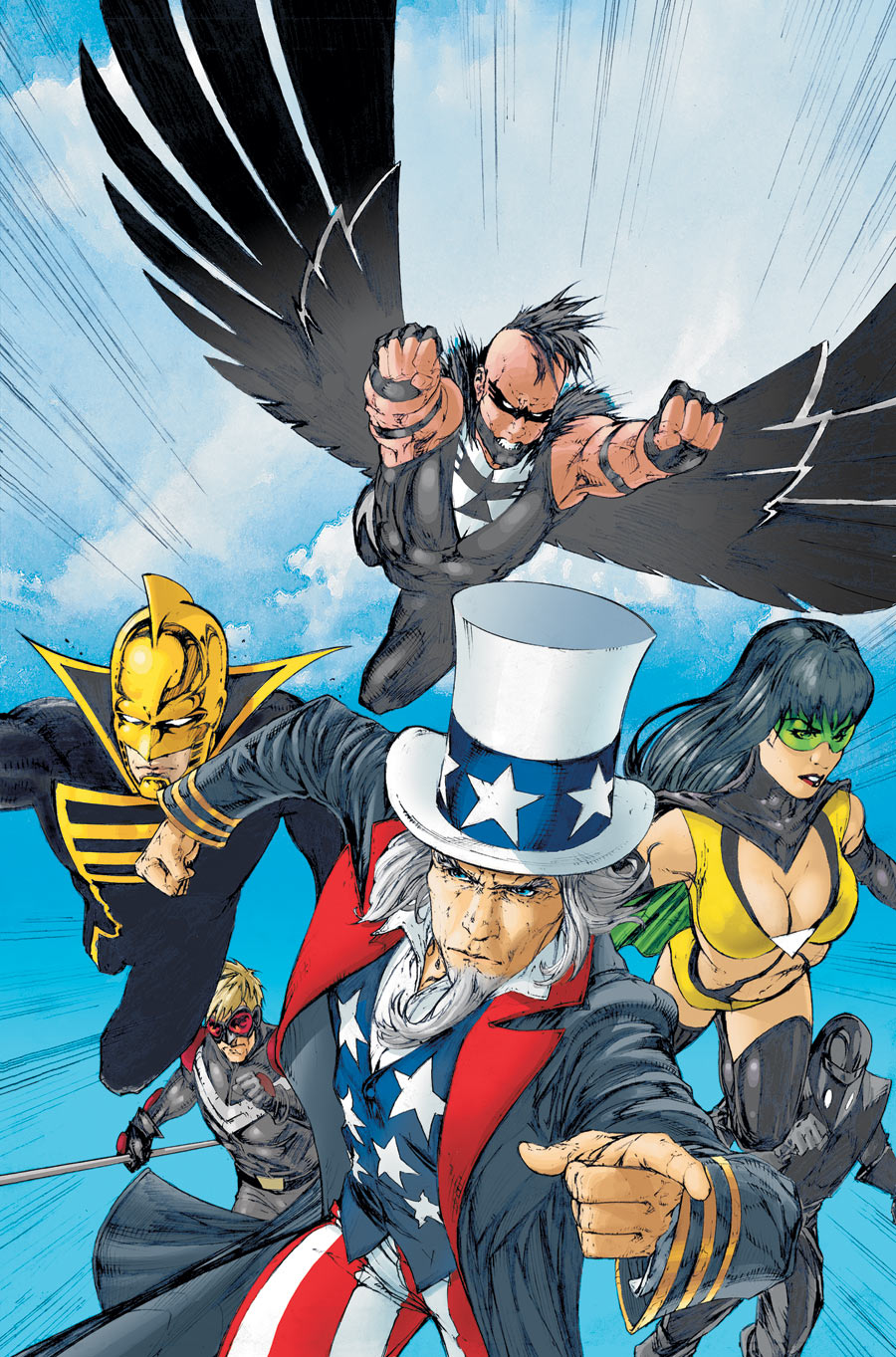 Roosevelt speaks softly and carries that big stick up his a**

I hate how there are people who think Andrew Jackson is awesome. He was a racist who disobeyed a ruling from the supreme court so he could practice his racism and slaughter Native Americans. He was a dick.

Some people are awesome despite horrible vices. H.P. Lovecraft was a terrible racist.

@Joygirl: To me disobeying a direct order from the supreme court when you are president of the United States of America so you can push out Native Americans of their lands by any means necessary doesn't qualify as a vice. To me it's closer to attempted ethnic cleansing, well down the road it was a pretty damn near successful genocide, though that part is probably not a result of his presidency.

I did say "horrible vices". >.> But I get what you're saying. In any event, I never said he was a great president, I said he was a badass, which he still was.

Teddy Roosevelt. You know your badass when people create a cute and cuddly toy based on you and are still considered a manly man!!!

Roosevelt...That guy has an awesome name + this

Teddy Roosevelt. You know your badass when people create a cute and cuddly toy based on you and are still considered a manly man!!!

@Jonny_Anonymous: Jackson rattled like a bag of marbles from all the bullets he had tanked. And beat an assassin to death with his cane.

Historically Andrew JAckson should win he was a army general so he should know how to kick some ass, Roosevelt probably served, I mean they called him old hickory because he was tough as hickory.

Roosevelt in all three rounds. He's easily the most badass President. He followed several Martial Arts including Jiu Jitsu and Judo. Once he was shot in an assassination attempt on the campaign trail and when his handlers insisted he go to the hospital he shooed them all away and gave his speech anyway.

Here's an account from his autobiography of a fist fight he got into in a bar against a guy with two guns:

“It was late in the evening when I reached the place. I heard one or two shots in the bar-room as I came up, and I disliked going in. But there was nowhere else to go, and it was a cold night. Inside the room were several men, who, including the bartender, were wearing the kind of smile worn by men who are making believe to like what they don’t like. A shabby individual in a broad hat with a cocked gun in each hand was walking up and down the floor talking with strident profanity. He had evidently been shooting at the clock, which had two or three holes in its face.

…As soon as he saw me he hailed me as ‘Four Eyes,’ in reference to my spectacles, and said, ‘Four Eyes is going to treat.’ I joined in the laugh and got behind the stove and sat down, thinking to escape notice. He followed me, however, and though I tried to pass it off as a jest this merely made him more offensive, and he stood leaning over me, a gun in each hand, using very foul language… In response to his reiterated command that I should set up the drinks, I said, ‘Well, if I’ve got to, I’ve got to,’ and rose, looking past him.

As I rose, I struck quick and hard with my right just to one side of the point of his jaw, hitting with my left as I straightened out, and then again with my right. He fired the guns, but I do not know whether this was merely a convulsive action of his hands, or whether he was trying to shoot at me. When he went down he struck the corner of the bar with his head… if he had moved I was about to drop on my knees; but he was senseless. I took away his guns, and the other people in the room, who were now loud in their denunciation of him, hustled him out and put him in the shed.”

And yes, as some one mentioned earlier, Andrew Jackson was a dick.

@MisterGuyMan: From the sound of it he played cool and cold-cocked the guy. Jackson used to challenge anyone he saw to pistol duels and let them shoot first, tank the bullet, then murder them.

@MisterGuyMan: From the sound of it he played cool and cold-cocked the guy. Jackson used to challenge anyone he saw to pistol duels and let them shoot first, tank the bullet, then murder them.

After some quick research, Jackson had three duels. His first duel was against Waightsill Avery and it ended with both of them agreeing that their honor was satisfied and they mutually missed on purpose. The second duel was against John Sevier and after some threatening with guns the scheduled duel never took place. The duel you're talking about was against Charles Dickinson. Jackson let him shoot first, was injured then shot him back.

Overall Teddy still has better feats. He fought a guy with a gun using nothing but fists. He also knows martial arts. They both can take a bullet but realistically the gun round is a bit random depending on how their respective single shots land. Roosevelt takes the other two rounds though.

The number of duels that Jackson took part in varies depending on what source you consult; some say 13, while others rank the number somewhere in the 100's, both of which are entirely too many times for a reasonable human being to stand in front of someone who is trying to kill them with a loaded gun.

Cracked, but still, they know their crap (I know, I tried to write for them).

The number of duels that Jackson took part in varies depending on what source you consult; some say 13, while others rank the number somewhere in the 100's, both of which are entirely too many times for a reasonable human being to stand in front of someone who is trying to kill them with a loaded gun.

Cracked, but still, they know their crap (I know, I tried to write for them).

Cracked articles are well done but I tend to research past that to make sure too. Anyway the duels help Jackson in the round where they have single shot guns. Even then single shots of his era were pretty unreliable and inaccurate so there's a lot of luck in that round for either of them to win consistently. Teddy has the advantage in the other two. He was a black belt in Jui Jitsu and was a Champion Boxer. I'd give it to him based on what he did.

@MisterGuyMan: Jackson beat a guy half to death with his cane (a man who was trying to shoot him dead). Dunno the details or if he had sustained feats but that is pretty badass.

@MisterGuyMan: Jackson beat a guy half to death with his cane (a man who was trying to shoot him dead). Dunno the details or if he had sustained feats but that is pretty badass.

Definitely badass but the Assassin missed and Jackson had a cane. So while it's badass the feat has Jackson beating a now unarmed man with his cane. Roosevelt beat a gunman with his fists for comparison.

@MisterGuyMan: Again, beat him by bluffing and coldcocking him, but sure. If Jackson had been pointing the guns Ted wouldn't have just walked past, he would have taken the bullet. :P But yeah, I think Ted would win in h2h. The only one I am up in the air on is cane vs bat, since Jackson was a master of canefu.

I wouldn't want to have to place bets on this fight.

All I know for sure is that Hamilton loses.

Teddy takes this. He was the single most badass President to this date.

Plus, Roosevelt knew martial arts, was a champion boxer, and would routinely go hunt incredibly dangerous animals because he felt like it. There was also a rumor that military personnel were complaining about having to ride as much as 40 miles a day for training. Roosevelt, at a quite advanced age, immediately went out and rode 100 miles on a horse, just to shut those pansies up.

Jackson was pretty badass, but we have to remember the time he lived in. Guns weren't nearly as reliable or deadly as they were in Roosevelt's time.

Plus, Roosevelt has the best reaction to being shot ever....

"It'll take more than that to put down this bull moose"

Teddy. He stomps Jackson then hands him a stuffie.

Not a stomp by any means, but in melee combat old hickory will be in trouble