Jean's problem is Surfer might have better telepath feats, he also has reflexes, reaction time and speeds that make him much much faster than anyone here.

No it isn't Surfer's skin is a cosmic glaze, he can willingly melt it himself with his mind to create a Surfer board, but nobody else can manipulate it, the skin is a galactus glaze. Only cosmic level planet busting bricks damage the Surfer or his surfboard, the skin that allows him to surive with no food, no air, take the climate of Deep Space and its radiation, he tanks exploding stars like SuperNova, even Surfed inside Blackholes

The Surfboard responded to Surfer's mental commands bullet itself into guys like Ronan and Thor, trap guys inside 2-D flattened space iside the Surfer board but it can fly independent and the Surfer board is now called 'Toomie'

Surfer manipulates matter/energies on solar system scales, he is know for busting stars and multiple planets 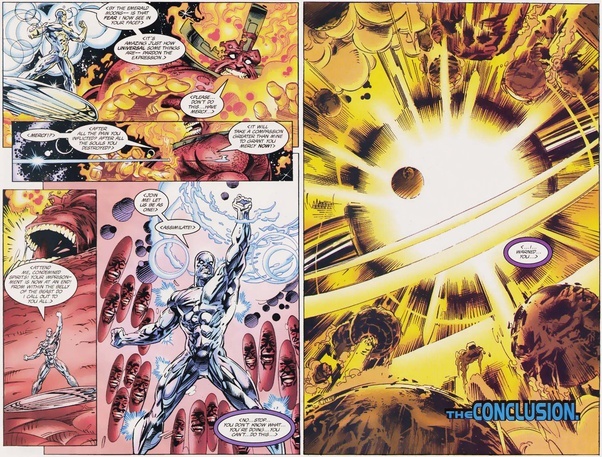 He's more or less a plot device like Manhunter, can travel forward in time, go so fast he goes back in time, can step outside of time etc

No it isn't Surfer's skin is a cosmic glaze

And what prevents this "galactic glaze" from being metallic? I mean, even Surfer disagrees with you.

Surfer's skin can even be significantly magnetized (good for Magneto)

Surfer's skin can even be significantly magnetized (good for Magneto)

How can they harm him?

Telepathy is their only hope of winning, but Surfer is a telepathy on the same level as Jean.

No way she can take him down especially with the other powers he has.

Magneto and iceman can't really do much here. Maybe freeze energy blasts and throw attacks at surfer to distract his focus. But if he starts throwing out his planet to start busting attacks then they're done for in seconds.