Neji vs Itachi (H2H Only)

Both are going all out, who wins?

The guy who swapped hands with KCM Naruto lmao

@tetsukage: I haven’t read the manga, but in the anime Naruto definitely threw more than one punch (I just rewatched the fight). Even if it was one punch, Itachi being able to block/parry an attack from KCM Naruto is a feat Neji definitely can’t replicate.

@strongerthanrin: @maestromage: In the Manga Naruto throws one punch the rest is him evading.

Do you guys realize this is hand to hand right? hyuga clan are the best in hand to hand combat. Itachi has to find neji's blind spot which isn't going to happen while he is up close like that, and All neji has to do is hit one Chakra point to hinder Itachi to change the tide of the battle and or shut down his chakra flow.

Yeah Neji wins definitely, he has the better feats, one hit fucks Itachi's chakra system up while Itachi isn't going to land anything meaningful.

@originalcaptain: @reaverlation: You guys for any hand to hand feats for Itachi?

Neji stomps. Itatchi never fought a serious KCM and is overall slower than Kakashi. A boxing ring meaning he can only run for so long whereas he's always within range? Not even Guy has the skill to do this.

In fact the right combo followed by an airpalm is uncounterable.

Is Neji moving faster than the Sharingan perceives him? Itachi, who understands the Hyuuga clan's techniques and traded with a cloaked Naruto, is not getting touched by Neji.

All out Itachi? Edo Itachi? This is almost spite.

Shairgan doesn't give you the auto win, Naruto isn't known for his taijutsu and he was beating Sasuke's ass who's much better at Dojutsu than Itachi

Also Itachi didn't trade with Naruto, Naruto wasn't trying he could have blitzed and killed him with RS just like he did the Raikage.

Itachi buries him, dude is better at taijutsu than kakashi and hebi sasuke, and he's consistently one of the faster characters in the series.

Part 2 Neji is featless, Itachi is way too fast for him and has h2h sharingan precog. Neji is never tagging him with even a finger leave alone palm. Itachi's clone blitzes like it did to Kakashi and puts Neji to sleep.

Citation for both those claims?

After the 5 Kage summit he's a mid tier in speed.

And since when is he better at taijutsu than the man who can match Guy?

The guy who swapped hands with KCM Naruto lmao

Neji wins if Genjutsu is not allowed, in a pure H2h fight itachi is no different than every other ninja, Kakashi, Sasuke, Killer Bee, Suigetsu, Kisame, Hidan, Kakuzu,Asuma, all of their stats are pretty similar by the way they fought each other.

should be evenly matched as most non specialized taijutsu ninjas are, if it aint the Raikage or Tsunade vs a ninja there is no such thing as a stomp.

How was it an outlier, exactly? You could argue that Naruto was chatting with Itachi and wasn't going for the kill there, but Itachi shouldn't be that far off him (given that he was as fast as Sasuke at the time, if not slightly faster).

Neji should take this.

Neji. Itachi can't dodge that attack speed. Them being so close as well hes getting his chakra points hit with a sixty four. Also no chakra no Sharingan. Neji can literally turn off Itachi's Doujutsu.

Sharingann I thought that Byakugan was a lesser version

Neji is is my favorite character and please correct me if i'm wrong but I think this is his best display of speed. It is incredibly impressive but I'm not sure it is enough to get around Itachi's speed,skill,experience,intelligence and Sharingan

The fact that Neji literally has no feats from Shippuden is complete effing foolishness. Screw Kishimoto.

Anyway, Uchiha's being overblown again. Lee said a graze can still be effective with the Gentle Fist style. Neji can still do damage even if he's not completely hitting Itachi. This by no mean a stomp.

Neji. Itachi can't dodge that attack speed. Them being so close as well hes getting his chakra points hit with a sixty four. Also no chakra no Sharingan. Neji can literally turn off Itachi's Doujutsu.

What attack speed? Itachi's hand movements are so fast Kakashi couldn't track him with his sharingan and he's as fast as Shippuden Sasuke, if not faster (this was implied during their fight).

Neji's speed feats are what, exactly? He has none in Shippuden and his best in part 1 was surprising Kidomaru and blitzing Naruto.

@mcu-defender333 The attack speed of Jyuken. Sign speed isn't the same as taijutsu. I Look at a few videos ir manga. Whenever Neji fights he always delivering multiple blows/ quick strikes in rapid succession. As far as feats maybe the best one he may have is breaking out of water prison jutsu ( Something Kakashi couldn't do with Zabuza) and attacking 3 different Kisame clones before the could react. In a boxing ring with only hand to hand combat Neji wins. Itachi isn't dodging eight trigrams sixty four palms.

Despite Itachi being able to fight with a not serious kcm naruto, he is not going to come out with a win against Neji in a pure hand to hand match. One simple reason: Neji doesn't punch, he strikes.

Neji has been trained in the way of the hyuga taijutsu from the moment he can walk. Hyuga don't simply rely on the force of their punch to damage their enemy, they instead strike the numerous chakra points the opponent has to effectively shut them down.

So, Itachi was able to block a punch from kcm naruto? Very impressive. But if you block a hyuga's strike, you are getting a chakra point ahut down before you even know what's going on.

Not to mention, the hyuga are the fastest strikers in the verse (outside of six paths characters). And Neji is among the best of said clan.

Again, I am not underestimating Itachi. I am well aware of how fast he is but his speed is not getting past the byakugan.

Itachi loses to the featless man 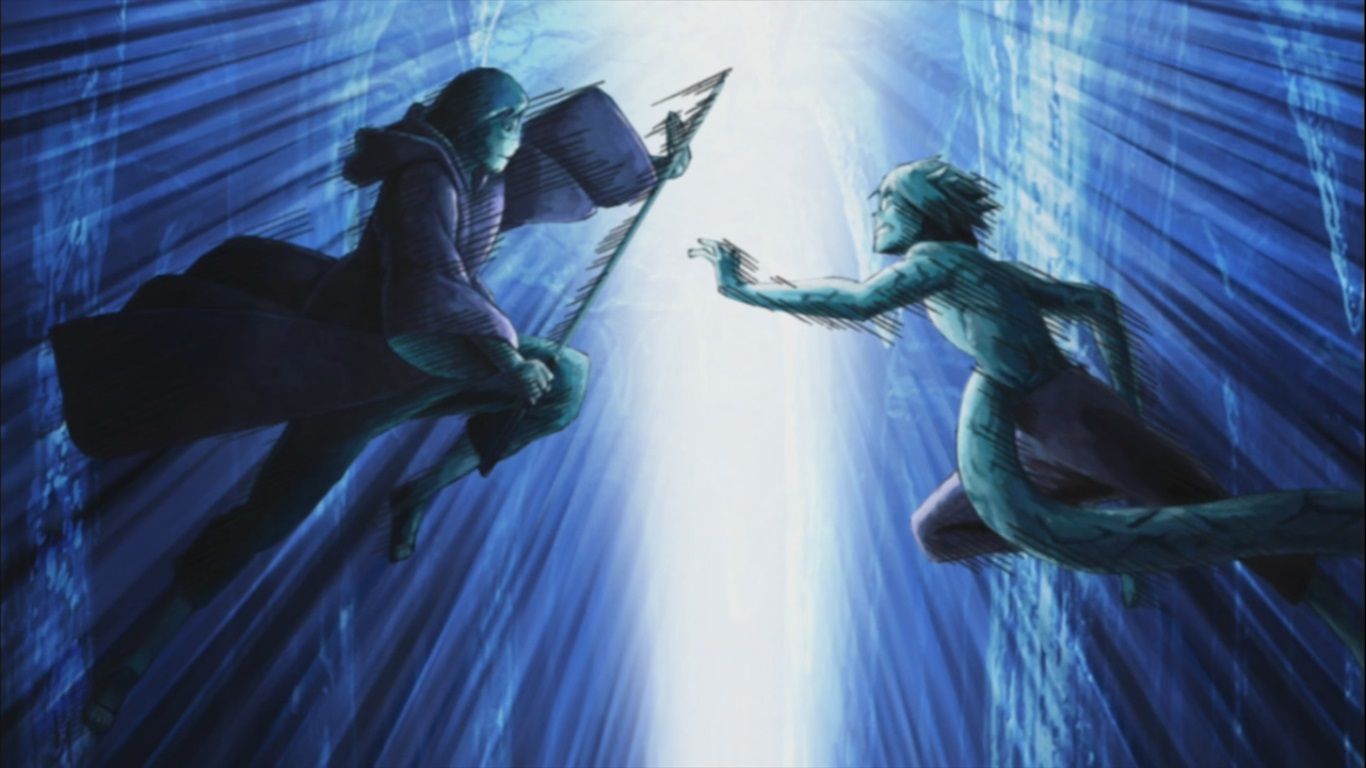 He could at least react to his attacks as shown in the pic above and even cut off one of his horns, which seems enough to me. I can't see Neji replicating those feats on his best day.

He could at least react to his attacks as shown in the pic above and even cut off one of his horns, which seems enough to me. I can't see Neji replicating those feats on his best day.