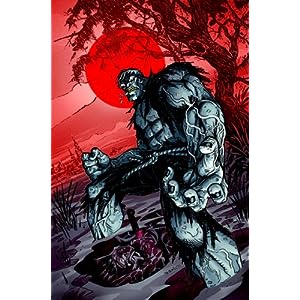 The Unstoppable vs The Monster that wants PANTS!!!! LOL
But in all seriuosness who do you guys think will win in a fight at night in central park new york!
9 years ago

#2  Edited By DeathGorath444
WOW a good fight & no opinons on it! I'm disapointed well I'll go first saying than maybe to me Juggy might take this.
9 years ago

Which version of Grundy? for Now i go with Juggernaut...

"Which version of Grundy? for Now i go with Juggernaut... "

#7  Edited By DeathGorath444
Well I answered but no one respones? what's with that?
9 years ago

#8  Edited By jasraj
@DeathGorath444:
Juggernaut should win, technically speaking he is unstoppable, and he can just increase his strength levels if he wants too, he is virtually immune to physical harm, he could just steal Grundy's momentum...Juggs wins
9 years ago

#9  Edited By Inevitable
I loved Solomon's Grundy mini-series and all, but he is just not in the Juggernaut's league.
9 years ago

#13  Edited By Thor's hammmer
you said all power maxed out so do you mean regular juggernaut or Trion Juggs?

#15  Edited By DeathGorath444
regular juggs at his best without going trion.
9 years ago

#16  Edited By PowerHerc
Juggs wins a good fight.
9 years ago

juggernaut takes the majority. like most of his matches on comicvine.

Juggernaut grabs his heart and crushes it. Ouch

Grundy already dead. Has no heart.

Juggernaut an' Grundy starts wrestlin' an' grapplin, an' Juggy pins him down to the ground an' then starts double hammerfistin' him to the ground. Then he pulls his fist back ta punch Grundy again, but Grundy punches Juggy off'a him, an' then Grundy grabs a truck an' slams it down at Juggy. Then Juggernaut starts laughin' an' rushes towards Grundy an' tackles him thru a buildin'. Then he punches Grundy into another buildin' with a left haymaker, an' Juggy then says "what are ya, a zombified version of Hulk? I've fought guys like you before, big guys with big punches….but lemme tell ya, I've met worse than you pal, an' no one's got a bigger punch than THE JUGGERNAUT!" an' then he double hammerfists the ground an' starts an earthquake goin' towards Grundy, which smashes Grundy all the way thru the buildin'. Then Grundy tackles himself thru the buildin' an' brings it down an' says "Grundy not sure….what brown man is saying…..but Grundy knows…..BROWN MAN NOT FRIEND!!!!!!!" an' uppercuts Juggernaut so hard Juggernaut hits a helicopter in the air an' bring it down, then Juggy's fallin' down to the ground an' his enormous weight makes the impact insanely powerful an' causes huge collateral damage. Then Juggy picks up a tanker an' throws it at Grundy. That causes even more collateral damage, an' hurts Grundy badly, an' Juggy jumps towards Grundy, picks him up, body slams him an' keeps punchin' him in the face with straight rights till his head's gone flat.

Juggernaut wins in a good fight.

His head has been exploded in half. Grundy simply reformed it.

@proteusxmanrxis: why bump this? Solomon would prob. lose to Hulk, Juggs has proven time and time again that he's superior, the only way he is losing is if he gets bfred or cyttorak depowers him..

Grundy gets one shotted.

Depends on the version of Grundy.

The Grundy who went up against Superman wins.

Grundy eventually would wear him down

Depends on the version of Grundy.

Talk about a possible stalemate never ending battle. Who ever gets wore down first will likely be the loser.

Juggernaut is closer to like, Thing, not some random Batman villain.

Juggernaut is closer to like, Thing, not some random Batman villain.

Solomon Grundy is a character that is shown to fight DC's powerhouses like Superman. His powerset varies depending on incarnations.

@noobmaster2001: At times, sure. But he's not consistent at all. So basically, his punches will of random amounts of damage.

@noobmaster2001: At times, sure. But he's not consistent at all. So basically, his punches will of random amounts of damage.

Yes, but his inconsistency is due to his different incarnations. It's not like Rhino who goes from fighting Hulk or Doc Samson to getting stomped by Spider-man. His 'inconsistencies' have an explanation and aren't really inconsistent at all.

@noobmaster2001: But due to those many incarnations, it's hard to find feats for him and no counter feats in one particular incarnation. Most characters have feats that come from many different stories.

@sirkaboom11: That's the problem with this thread yeah, it depends on which incarnation.