Run a One Piece Gauntlet

Stop 1 I don't see them getting past Enel Intangibility and Law's Hax.

To add on to that

We already seen Madara get obliterated by his own meteor before

Stop at 1, nothing to do agaisnt Law hax and enel fruit.

And if somehow they win, they hardstop at 2 doffy strings and cracker army of cookies is to much.

There's a chance for them to stop at 1 if the OP team has perfect teamwork. They aren't tanking Enel's blasts and will struggle to hurt him. Meanwhile Law can make their defenses a non factor by either disassembling them or teleporting them out.

Otherwise they might stop at 4 due to hype, definitely gets crushed at 5.

Could stop at 5-7 most likely 5 because of Kizaru

R1 can be tricky but Enel is too much of Jobber in character imo.

R3 They can lose this one if they try to fight stupid and get physical, other wise they win with their hax. Like Madara Genjustu or Hashirama sleep pollen. High dif due to Color of Observation Haki.

R4 Don't know. Not enough feats yet. It should be a hard fight based on what we've seen though

R5 They have a strong chance of losing this one. Kizaru is faster then both and Fujitora can pin them down with his gravity. Madara has to carry with his hax here. They neg Hashi every where

R7 Yonkos proably stomp if we are being honest. Kaido is a monster. Only chance is Genjutsu

Don't even get past 1. Eineru solos. Law one shots the verse. They get one shotted at every round. All these characters neg diff the verse let alone the spite this is.

Could even stop at 1, otherwise stop at 4

@thegodmadara: hasirama isnt soloing 4th gear luffy and katakuri since this is alive hasirama not 4th war. hes getting folded by them never mind soloing

@thegodmadara: hasirama isnt soloing 4th gear luffy and katakuri since this is alive hasirama not 4th war. hes getting folded by them never mind soloing

LOL to this, Alive Hashirama is Small continental level, While the strongest OP Characters are country level, Hashirama solos, they are not destroying Hashiramas Wood period, Hashirama can solo, Madara can Solo simple as that, One Piece God Tiers are, Low- High tiers in Naruto

@thegodmadara: do you have small continental hasirama feats while he was alive? war arc does not count lol. if karans fodder chain jutsu could smash the wood buddha luffy in gear 4 def could. I might be wrong so coreect me if i am

Blind Revived Madara (Remind you, a wayy weaker Madara than EMS) destroyed the same deity gates with pure raw strength, those same deity gates can tank bijuu bombs from the Juubi in 3rd form with nature energy buff and also held it down with ease. The Bijuu bomb was also inside a barrier meaning the gates took the full force of that attack.

Here is the comparison between the bijuu bomb size from the 2nd form Juubi and 3rd form (the bijuu bomb ball, not the explosion).

Here is the comparison between the bijuu bomb size from the 2nd form Juubi and 3rd form (the bijuu bomb ball, not the explosion).

So we have blind revived Madara’s Ap at least 40x that of the Second form Juubi bomb that is Country to Large Country level as a lowball AP/DC. Since he broke the deity gates with brute physical strength and or his chakra flex when he had no eyes or sage mode.

Madara then goes on to get Hashirama's sage mode + almost all of edo Hashirama's chakra (except the small amount he gave to Sasuke). Sage Mode is an amp thats way beyond Curse mark which gives you at least 10 times power to base

Here are some fodder characters that are lightning speed

1- Yes, Teen Kakashi has actually cut a natural lightning bolt with his Chidori, that's why it earned the name "Raikiri" aka Lighting Edge/Blade.

It was not just stated by Guy...

...but also confirmed in the Official Databook.

I know that, sometimes, Databooks fall into hyperbole (just like every other manga/anime Databook; hyperbole are used to hype) this is clearly not the case, since it's talking about an event happened in the past.

Furthermore in the Anime (4th War Arc - vs Edo Seven Swordmen) it was also shown a flashback about Teen Chunin Kakashi & Guy (who replaced Obito) performing his famous Raikiri, cut a natural lightning bolt and gaining that name.

Remember that a sick, not-serious, near death and almost blind Itachi was able to react and block Kirin, who's massively above any other Natural Lightning.

You can see how common natural lightnings are depicted in this panel...

Kirin being massively above natural lightnings is obvious. Furthermore Sasuke himself stated it to be "Lightning from Heaven itself".

Remember that, in the Naruto world, natural lightnings are faster than our real world lightnings...as stated by Zetsu the speed of lightning is:

And a sick, near death and almost blind Itachi reacted and blocked it when it was already fired.

3- In the Boruto Anime Victor, Inner Member of Kara, was able to summon cloud-to-ground Natural Lightning; that got avoided by Mugino and Konohamaru (take also into consideration it was a suprise attack and Konohamaru was in mid-air), that Itachi scales above.

which is also a consistent feat since, previously, Team 7 managed to dodge a lightning bolt fired by an Amalgama White Zetsu, who is the embodiment of natural energy.

Also Base Minato's reactions (look at his hand) are faster than Raikage Ay, who turned into a lightning bolt during the 3rd Shinobi War:

Now Imagine Madara, and how massively above he scales to these fodder characters in Naruto compared to him.

Lets look at some feats from Madara

Edo Madara (Way weaker than this Madara) reacting to a hit from an object moving at the speed of light, with Madara regaining balance. Madara was also completely unaware they were coming. Keep in mind this is also a weaker Madara's version without even SM precog:

Blind Madara (No SM) speedblitz's Naruto with casual ease. This is very impressive because Naruto can react to things that are much faster than lightning, but he couldn't react to Madara's speed. Madara with his Rinnegan is much much faster than this 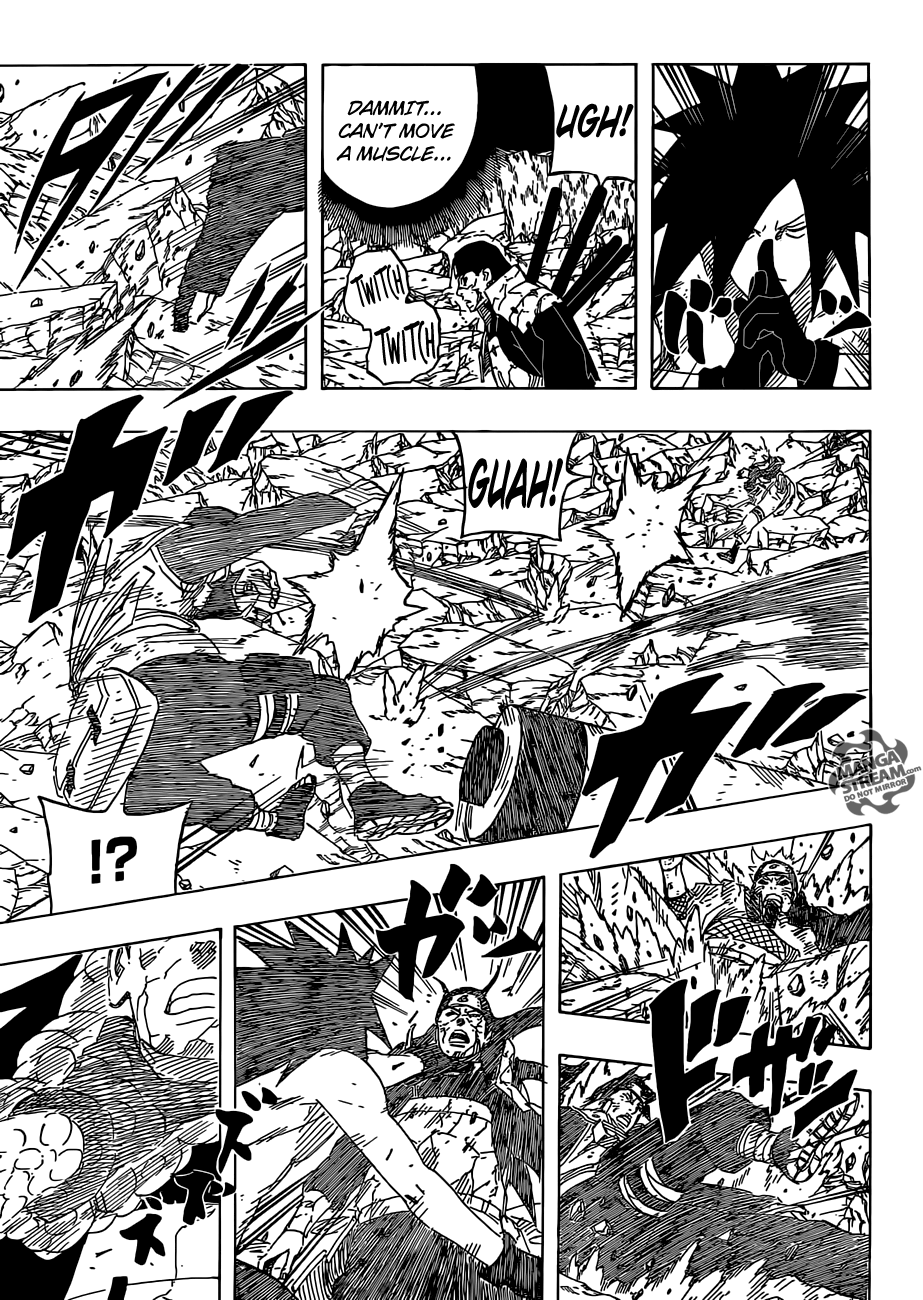 LOL to this, Alive Hashirama is Small continental level

What's the point of those lightning scans? Which are less impressive then the former

Kizaru is even faster at LS

And that Deity Gates scaling is terrible

"Madara does not have Wood Release or Sage Mode"

Either of them solos.

Limbo can do that I guess. People who doesn't possess Rikudou Chakra can't touch or damage them. And Limbo is in another dimension. So I don't think Logia really matters. Plus sometimes you don't need to physically touch people to damage them. :D

That wood was tanking the BD of 100% Kurama with PS sword inside it. So I don't think so.

They probably stop at 5

Gauntlet isn't in order. And stop at 1 with Law oneshots them.

I see a vast dichotomy in these answers lol

OT: The shinobi can take it if they have knowledge of logia weakness (water style) and play their cards right, they have better versatility and higher DC overall, however if they try to go for h2h then....