blurred_view's Flashpoint: Wonder Woman and the Furies #1 - Part One: The Arrangement review

Dan Abnett and Andy Lanning give a Flashpoint history lesson, showing the meeting and wedding of Aquaman and Wonder Woman. Unfortunately, it really does read a bit more like a history lesson than a story as DnA simply do not have enough room in one issue to cover the material.

The issue begins with Diana's first excursion into man's world, where she coincidentally crosses the path of a a baby kraken and this coincidentally catches the attention of Arthur. It is a very contrived first meeting, but like every other scene in this issue, it does the bare minimum of what it needs to do to move the story along.

They meet, they get engaged, the wedding begins and the wedding goes badly. This issue rushes along in a by-the-numbers fashion and glosses over all of the details. Diana and Arthur suddenly decide their marriage would be for the good of the world, but we are never shown how they come to this decision. Themyscira and Atlantis suddenly become known to the outside world, but we are never shown how this plays out.  A conspiracy suddenly strikes to stop the union between Diana and Arthur, but we are never shown this conspiracy coming together. This reads like DnA turned in an outline rather than a script. It's a list of story beats with no transitions between them, and because of that, there is absolutely no drama to this story. The characters are two-dimensional, and the situation is predictable almost every step of the way.

What doesn't help this issue is the cliche DnA hang it all on. The great conflict between Atlantis and Themyscira is sparked by a misunderstanding. It's that classic cliche where an alliance of conspirators, made up of exactly the characters you immediately expect, turn the two parties against one another by framing one of a terrible deed. And of course, the two parties are immediately at each other's throats. It is such weak storytelling, but it also doesn't even work because DnA gloss over everything that should build up to it.

Why is the tension between Diana and Arthur so quick to erupt? We are really never given any scenes between them to get some idea of what their relationship is like. There are no personal moments to show us if they care for each other at all or are purely all business. Why are the conspirators so against Diana and Arthur's marriage? Going along with the complete lack of personal moments in this issue, we never see what exactly the likely suspects' motivations are.

The cover is disappointingly misleading, because there really is no "and the Furies" to this issue. It is entirely a flashback, so we will presumably have to wait until next issue to actually see what Wonder Woman and the Furies are like.

If this story was the entirety of Wonder Woman's three-issue tie-in, it could probably work. DnA would then have the page space to include the much needed personal moments to support everything that happens. We could actually get some idea of Diana and Arthur's relationship so we could care that it falls through. We could be made to understand what tangible value an alliance between Atlantis and Themyscira had so we would know how close the Flashpoint world came to something great. We could actually follow the conspiracy so there would be at least some intrigue and suspense rather this artificial conflict.

DnA turn in a weak effort with their first issue. With Emperor Aquaman, Tony Bedard at least tries to keep things interesting by splicing flashbacks into a present day story. DnA try to tell the history of Aquaman and Wonder Woman straight here and really make no effort to spruce it up. Their general idea is not a bad one, and the art is appealing. But DnA do nothing with it. They move around two-dimensional characters through a predictable sequence of events and rob it all of any emotional weight.

Is this a relevant Flashpoint tie-in to read? Technically, it is. This is how the big war came to be. Unfortunately, DnA drop the ball on making it anything honestly worth reading. Skimming through a summary of this issue would do you just as well as reading it.

Other reviews for Flashpoint: Wonder Woman and the Furies #1 - Part One: The Arrangement

Can We Keep This Version of Diana? 0

The first issue of Flashpoint: Wonder Woman and the furies. And it is good.The GoodWhat isn't good about this issue? It kept me at the edge of my seat at the turn of every page. If you're unfamiliar with Wonder Woman, or never really had an interest in her character, this is still a good book for you to pick up. This isn't the Wonder Woman we are all familiar with; this, like many of DC's Flashpoint characters, is a completely different take on Wonder Woman's character- and it is awesome.The cre...

Going to the chapel, and we're going to get parried 0

Flashpoint: Wonder Woman and the Furies #1 - Part One: The Arrangement by razzatazz on July 06, 2011

To be honest I have not been liking the Flashpoint version of Diana.  A bit too much of a departure from the character in my opinion, but I thought this issue was quite interesting.  It sort of retells the Wonder Woman origin again (for what must be the hundredth time) but does so in a way which is quite different from the rest.  A marriage of political convenience with Aquaman is arranged as the two cultures are looking to rejoin mankind.  Of course to get to where they are in Flashpoint someth... 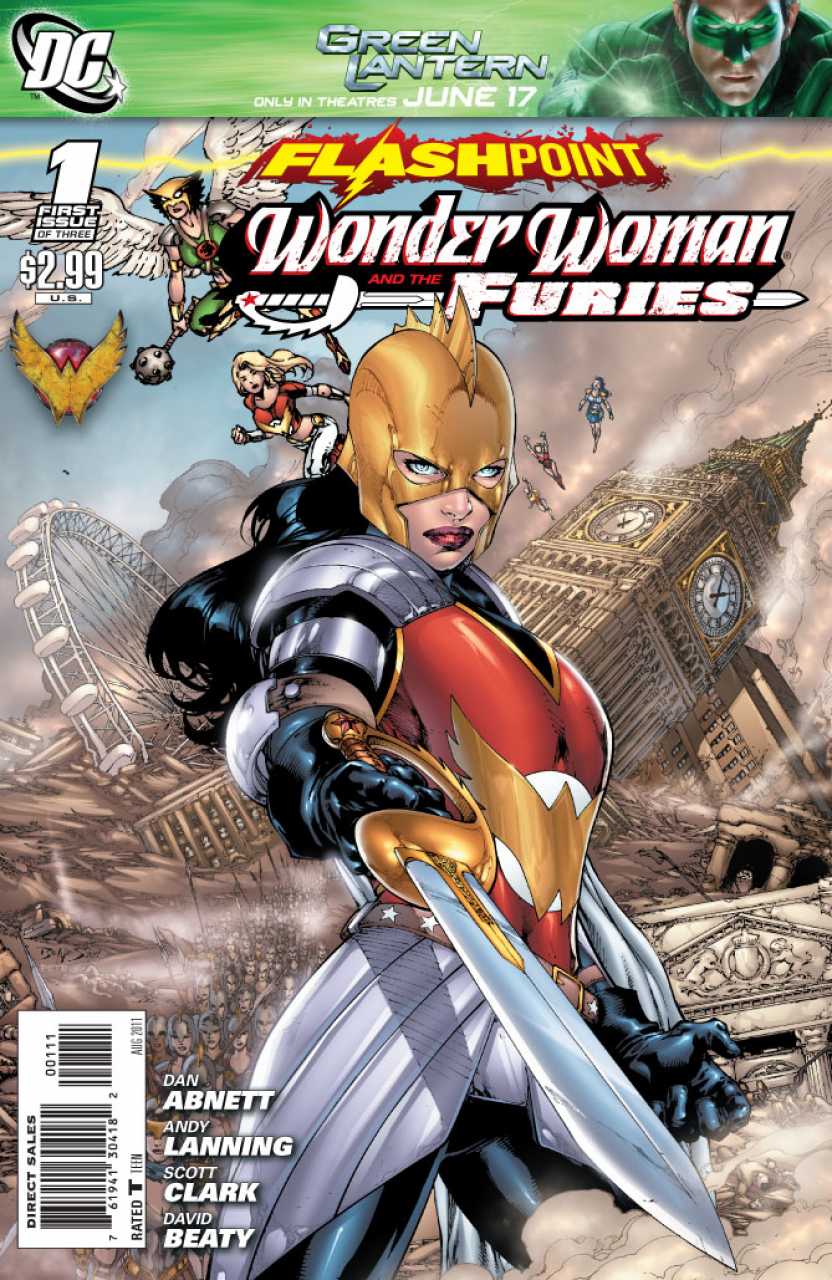