You can't go wrong with Azzarello and Risso writing a Batman without rules. This is the best Flashpoint tie-in and best tie-in I ever read.  Sometimes you just need a really gritty and dark Batman story and this title delivers.

Issues 1 and 2 were dark, tense, and violent takes on a world without hope.  Issue 3 doesn't miss a beat but Azzarello finishes strong packing a hell of an emotional punch to the series.  The final issue captures the rich noir flavor that Azzarello is known for.  We get to the very emotional conclusion to Thomas Wayne (Batman) reuniting with Martha Wayne (Joker).   While the premise is a bit much to take in at first, you really don't think about it because ... well Azzarello and Risso are just that damn good.

We see how the death of Bruce effects his parents.  It causes them to react in two ways: escaping to vengeance and escaping to madness.  Thomas is a romantic, always fixated on the past while Martha just can't deal with looking back at all.  It's a terribly complex and tragic conclusion and it was executed with brilliance.

While the title has not explicitly tied itself with the main Flashpoint title, it provides a good context for who Thomas Wayne is and how he is motivated to do what he does.  To nitpick, technically in Flashpoint there isn't a good window of time for Batman to be aware of the alternate timeline and confronting Martha.  However, I can just deal with it because the conclusion is so brilliant.  Like Johns and the rest of the Flashpoint titles, they do a great job of creating the familiar while

Risso's artwork last issue was top notch, just the lay out work and pacing were incredible.  This issue is a bit more standard but I do love the big splashes in this issue.  Again, I got to just give credit to Andy Kubert's design on the Flashpoint Batman, the red really highlights the darker and broken nature of the character.  In this bloody issue, the red eyes really work as it looks as if Batman is crying blood tears.

The final panel is just haunting and the perfect way to end this story.  And for Azzarello I just love some of the final dialogue:

Martha: Tell me more about what happens to Bruce.
Thomas: He follows in his father's footsteps.
Martha: He becomes a doctor?
Thomas: No.

Its scene filled with such anguish and the answer is too much for Martha to handle.  And really, could any mother handle knowing that their son will end up in a life of dark and brooding obsession?

Other reviews for Flashpoint: Batman Knight of Vengeance #3 - Part Three

If You Read Any Tie-In, It Should Be This One 0

With this final issue, Batman: Knight of Vengeance stands as the Flashpoint tie-in most worth reading. Brian Azzarello and Eduardo Risso tell a story that could have stood on its own as a very interesting Elseworlds tale but is made even better by its connection to Flashpoint. This, honestly, should have been the template for every tie-in.  This tells the story of Bruce Wayne's death as a child in that infamous alley and the deterioration of both his parents as a result. At first glance, Thomas ...

Dark and violent yet tender and complex... 0

If there's one Flashpoint issue that provided a stunning, jaw-dropping moment, it would have to be "Batman Knight of Vengeance" #2. Writer Brian Azzarello took the classic Batman and Joker dynamic and twisted it to be even darker and more disturbing than usual. I won't spoil it for you in case you haven't read it, but issue #3 brings it all to a chilling, brutal, and violent conclusion, but not an ending without complexity and heart .  Azzarello's story is hands down the best of the Flashpoint ... 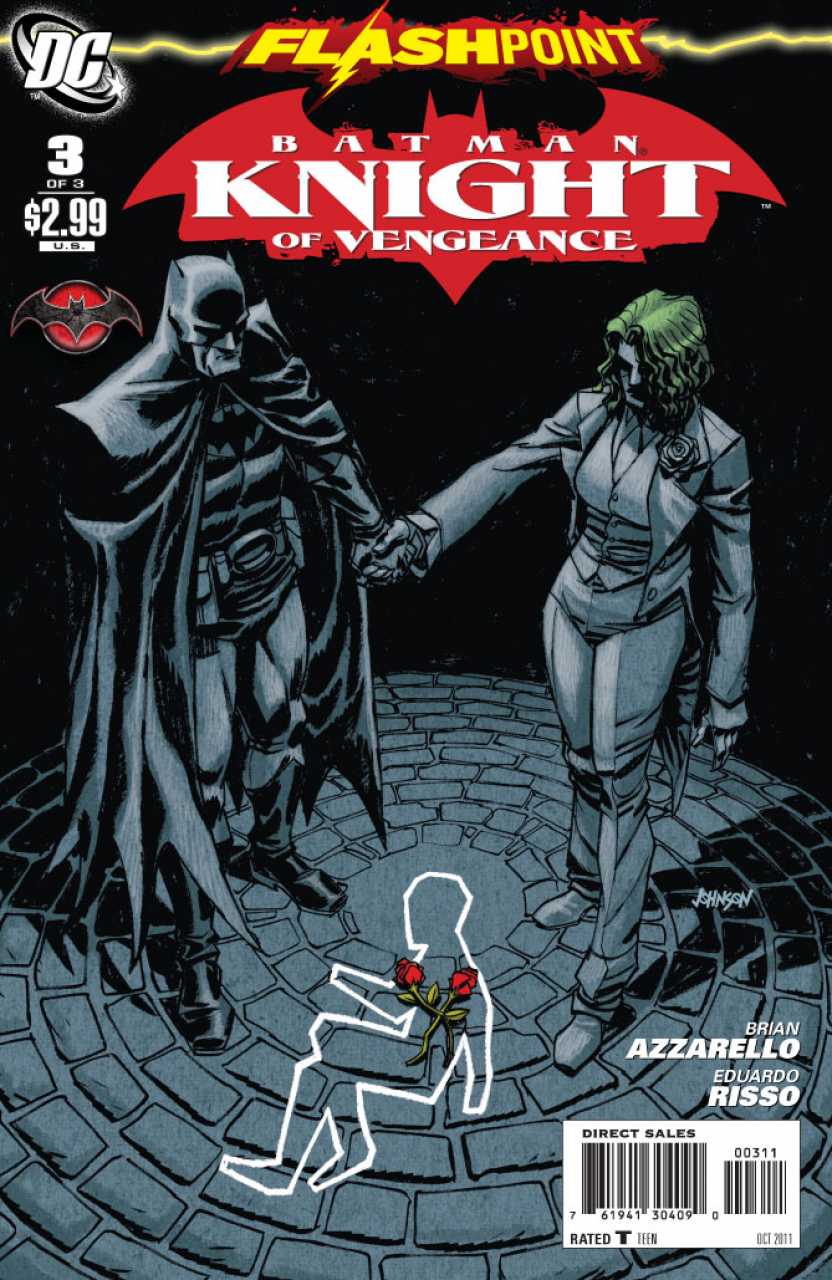