The Story
Thor returns back on Earth in Broxton, former resting place of Asgard. The townspeople tell him to scram, they're better off without superhumans, and to "go blow someone else up". Thor leaves. The Serpent and Odin have some big long monologues about winning, while some dynamic scenes play of the terror that everyone is facing. We flash over to Iron Man, Black Widow, and Nick Fury, talking about what to do. Bucky is lying there, looking very dead. Thor shows up and tells them Odin's plan to blow up Earth in collateral. They ask Steve Rogers, who has reclaimed the mantle of Captain America, to lead the charge with the other big ones: Iron Man and Thor. Thor goes to Antartica to face the Serpent. Iron Man goes to Oklahoma to see if he can get Odin's help, and Captain America goes to Manhattan to lead the Avengers. The Serpent gets enough power to return himself back to a more youthful form. Stark takes a drink as a "tribute" to try and summon Odin. Skadi is delighted to "kill Captain America twice". Thor encounters the Serpent, who offers him a chance to join the Dark Side and Thor refuses, so consequently, he is teleported to some city, where he enters battle with Nul and Angrir (Hulk and Thing).

The Good
Not a lot to be honest. Captain America is using a gun, which is a realistic thing to do. I mean, you can only do so much with just a shield.

The Bad
Tony Stark...takes a drink...to summon Odin...Almost as bad as the woman from Transformers: Dark of the Moon making Megatron betray his ally, Sentinel Prime, by having a real chat with him. Fear Itself is a story ark in which to get even half the picture, you'd have to buy almost every single issue, main series and tie-in. The series moves too fast, there's not enough meaningful dialogue relevant to the plot, and it's all action.

The Verdict
Here we are, halfway through the arc, and I'm frankly incredibly disappointed. You'd think that they have good art to make up for a crummy story, but nope, it's simply mediocre. I don't like how fragmented it is, it feels almost sloppy. All the hype, and some cool ads, but this series is about as fear related as the Power Pack. Don't pick this series up, as they'd have to have a heck of an ending to dig their way out of this hole. I'm going to stay onto the series, and hope that it improves, but my hopes aren't high. If you want to get a major story arc, don't get this, get Second Coming, because it's awesome, and this, frankly, isn't.

I completely agree. This was such a let down. To just leave Bucky there and move on, well that bugged me. Also the Stark knocking back some alcohol to summon Odin really pissed me off. If not for the art this would get a 1/5 but it gets 2/5 for me.

Other reviews for Fear Itself #4 - Worlds on Fire

A death not noticed 0

Cover I was pretty excited to read this issue because the cover looked pretty cool. Especially because we see someone holding the Captain America mask and we can see the result of what happened to Bucky in the last issue. Something I like about the Fear Itself main series covers is that color is always different. Even though this issues color was a lot like the first issue’s cover. Story Steve Rodgers, Tony Stark, and Thor all work together to fight the Serpent and all the people working ...

Fear Itself arrives at its middle chapter with a lot of noise but seemingly little understanding of what it is doing there. It throws in big action and big drama with little to no weight behind them, slowing the momentum of this story to a crawl. The saddest thing about this hollow experience is that it seems unaware of how superficial it is.  The issue picks up from Bucky Barnes' death in the previous issue and does nothing to give any meaning to it. It apparently makes Black Widow sad. Then, i... 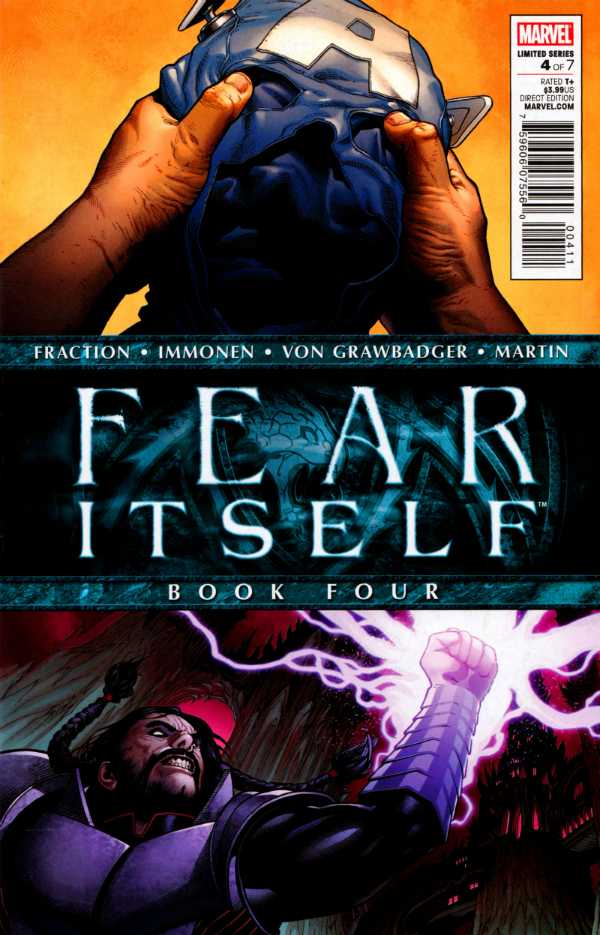 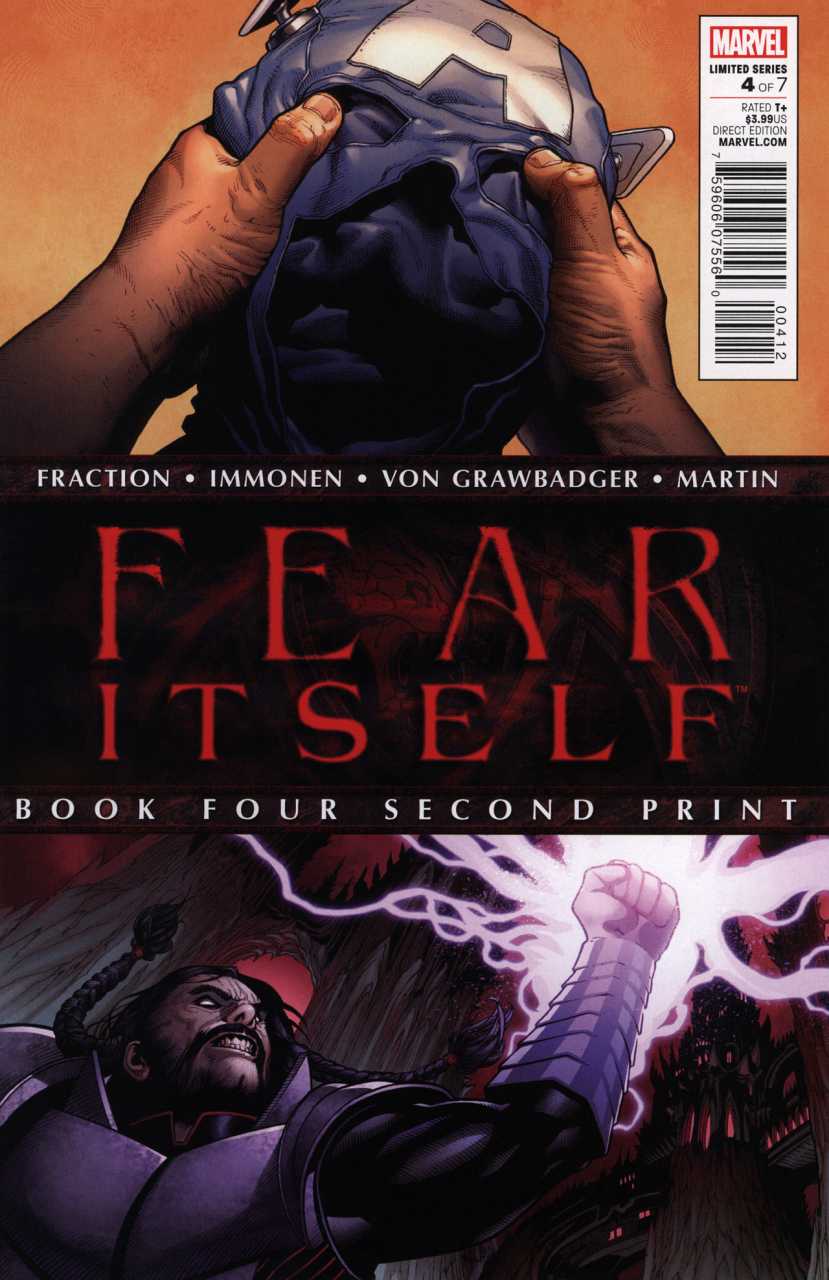 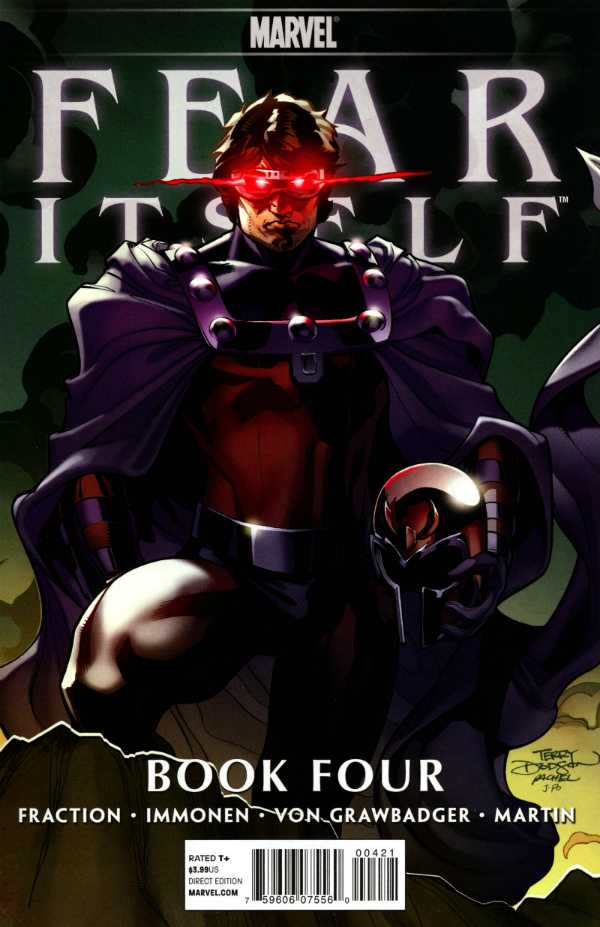 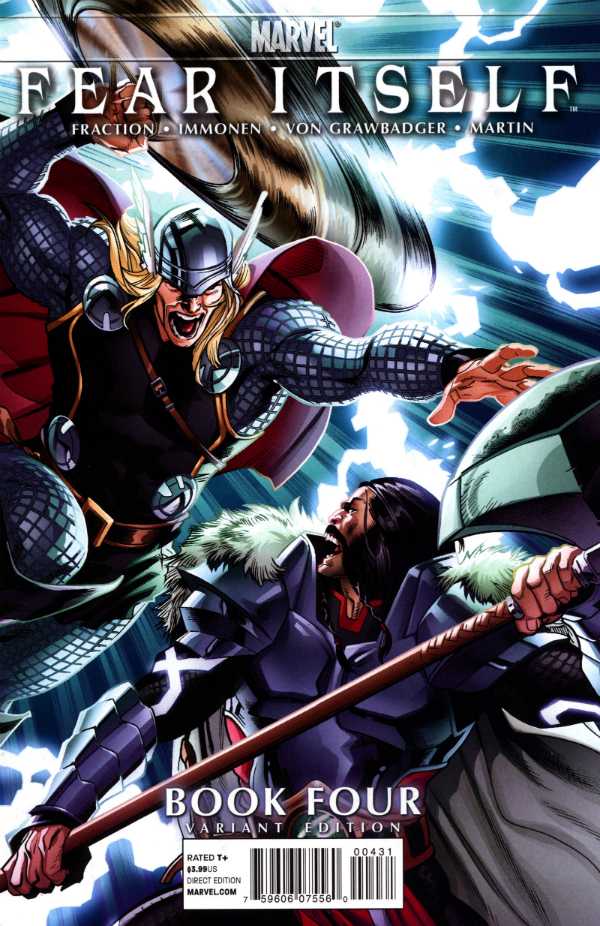