gc8's Fantastic Four #40 - The Battle of the Baxter Building! review

'The Battle of the Baxter Building' is a pretty average Fantastic Four vs. Doctor Doom story. On the plus side they team up with Daredevil, and Doctor Doom fires an array of clever gadgets at them.

On the minus side, Daredevil uses his billy club as a gun (complete with a pop up sight?!?!), and just conveniently disappears from combat halfway through the book when it's time for the Fantastic Four to take center stage. And, after the battle, the Fantastic Four's decision of how to deal with Dr. Doom seems incredibly naive.

The biggest problem though is the dialogue. The plot works pretty well, but the dialogue could enhance it better if it had been written a little better. For example, the Fantastic Four have no powers during this issue until Reed gets the Stimulator, a device to power them up (yeah, O.K., so the plot is a little corny too - but it was the 60s, what do you want?), but then when he's about to power up the Thing, Ben says, 'but mebbe I don't want to become the Thing again', mind you, he doesn't outright object, he just says 'mebbe'. Reed doesn't care. Doesn't take Ben's wishes into account. He just says they have no choice, and makes him the Thing again. Then when confronting Dr. Doom, Thing flies into a rage yelling at Doom, "It's because of you that I'm the Thing again!!' Uh, no, actually it's because of Reed. In the end, the Thing quits the team because he 'got the short end of the stick' because he's the Thing again. Well, if he hates it so much why did he not insist that Reed not change him back to the Thing? As you can see, all these events would have made more sense with just the right dialogue. If the Thing had vehemently protested being changed back, and Reed did it anyway, and then he dealt with Dr. Doom but kept his anger for Reed, and then walked out in protest at the end, the essential plot would be the same, yet make more sense.

Other reviews for Fantastic Four #40 - The Battle of the Baxter Building! 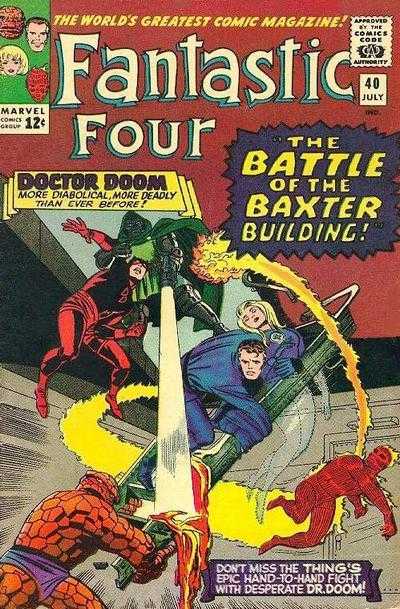