This has been a very interesting series so far, and I'm happy that it's finally hit a higher gear. Although the last two issues weren't bad they didn't really progress the story much, and could have been squeezed into one issue, so I'm happy that we finally get to see the Fantastic Four's adventures.

This issue sees the Fantastic Four finally start their adventures, but they find more than they'd bargained for in this one.

This was a brilliant issue, and the best in the series so far. Matt Fraction has really done a tremendous job on this series, and is starting to make me like the Fantastic Four more than ever. I have never really been a huge Fantastic Four fan, but I jumped on Jonathan Hickman's run during the storyline which would feature the death of a Fantastic Four member, and also got some of his work prior to that, and after. Although there were some good stories, the others were average, or bellow, and I almost gave up on them. Fraction has however made Fantastic Four fun again, and I am happy he has finally started telling their adventures, as I was starting to get bored by the end of the previous issue (due to the long build up). I've also loved that Fraction has been able to write the Fantastic Four as a family really well, but I'll talk more about that further on in my review.

I've really enjoyed Mark Bagley artwork over the series so far, and his style of art really suits this series. I've always loved Bagley's art, ever since seeing it in Ultimate Spider-Man, and although I've not bought anything since the combination of his art and Fraction's writing is what made my final decision to at least try this series, and I'm glad I did. I also think that this is the best art he's done so far in the series, as the last couple had the odd panel lack of detail, whereas this issue has little to none, with the few having them in the distance. This issue also showed the amazing, and eccentric looking things that Bagley can draw. I also loved the way Bagley drew the interaction of the Fantastic Four family, as it really expanded on the brilliant writing that Fraction already provided showing that although they're going on adventures that this is still a family, with is probably shown more now than it's ever been.

As I've said a couple of times already I really enjoyed that this issue has shown the Fantastic Four as a family. Although Hickman used Franklin, and Val in his run it showed more of their education, and didn't really show enough of them as kids. It also didn't show enough of them with their parents, and that's what I love about this series, you're reminded that they are still children, and that they add to the family. It was nice seeing them interact with their parents, and that how they fought over who should land on the new planet first. It was also nice to see Reed (Mr. Fantastic) have a bit of fun, as he's been worrying about his Unstable Molecules decaying, and whether the rest of the team have a similar problem.

I felt really sorry for Ben (Thing) in this issue as he's the only person who has to sit out this adventure (at least most of it). It's bad enough that he's the least human looking out of them, but the fact he can't join in on their fun is another blow to his confidence. He did however get a moment to shine later on in the issue which kind of made up for this, which was nice for the big lump of rock.

This issue could have also been considered a slow issue if it wasn't for the reaction the planet had to the Fantastic Four's presence. The planet appears to have sentinel thoughts, as it attacks the Fantastic Four. This was a terrific sequence, and it gave a brilliant opportunity for Bagley to show of his amazing skill as an artist. It also gave a chance for Ben to get involved in the action, and feel part of the family which was also nice to see. My favourite part was however a line from Sue (Invisible Woman) saying that she expected this journey to be, "less action, more adventure," which really put Reed in his place. I also liked how Reed had to warn Johnny (Human Torch) about flaming on, due to there being no oxygen.

This was a great issue, and a really fun, showing ton's of promise for the future of this series. I would highly recommend both this issue, and the other two issues in this series, and am really looking forward to the next issue.

Other reviews for Fantastic Four #3 - First Boots On the Ground

One Small Step For Family 0

Fantastic Four #3 - First Boots On the Ground by the_mighty_monarch on January 11, 2013

There was something a little formal and stiff about this issue, something that reminded me why I had a hard time getting into the Fantastic Four previously. The exploration was just the first thing dumped right into their laps, there wasn't much of a 'first outing' feel to this. Most of the time I felt like this was supposed to be their second or third adventure on their journey.Other than that this issue was great. Bagley's art continues to impress the hell out of me, especially compared to wha...

I don't even know where to start so I'm just gonna wing it. I frickin' LOVE this series and this issue continues to impress. Fraction is capturing these characters in a way we haven't seen in a loooong time. I feel like I'm reading the series before the 90's and some of the horrible things going on in the industry then. Fraction writes everyone with the personalitys they were originally written with and I can't gush over it enough. Ben is a bit over-the-top and rough as a cobb, Johnny is a prank... 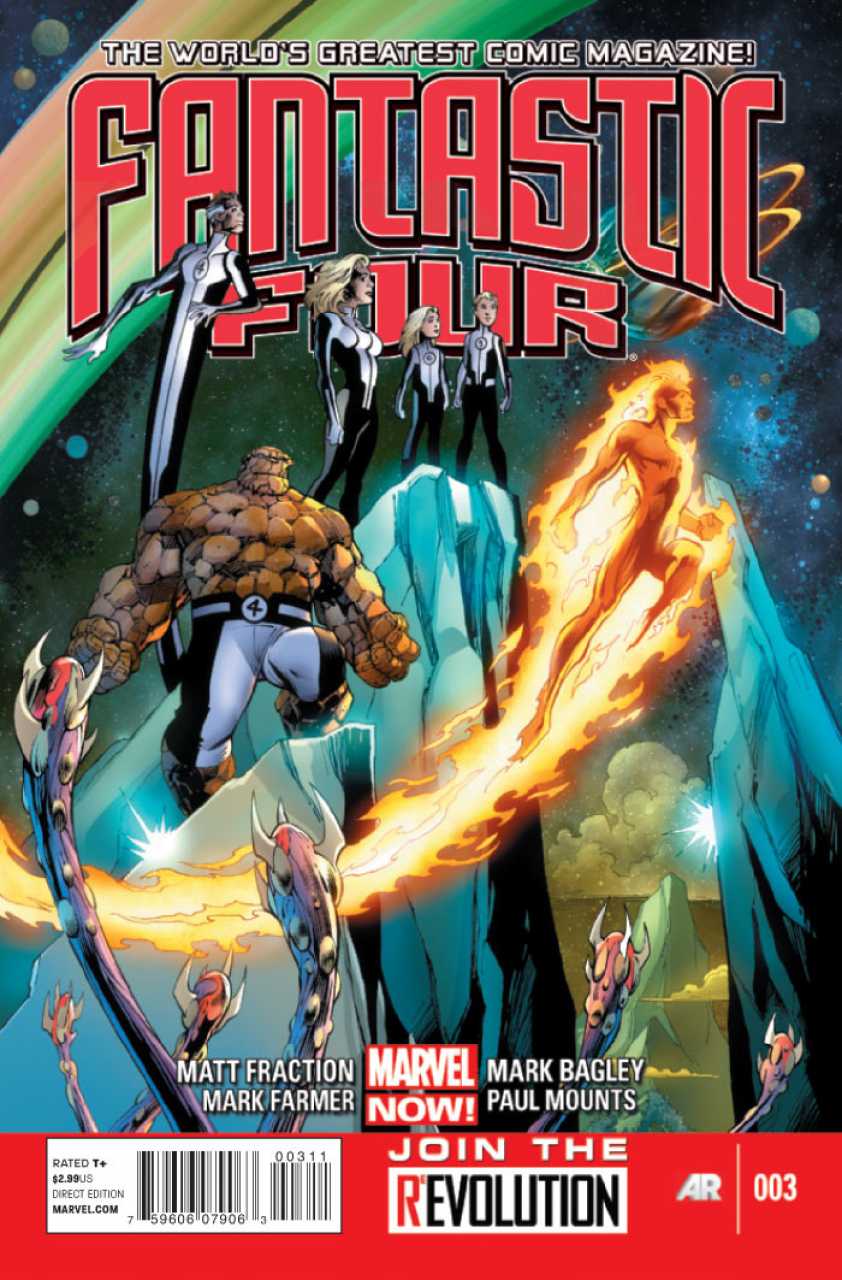 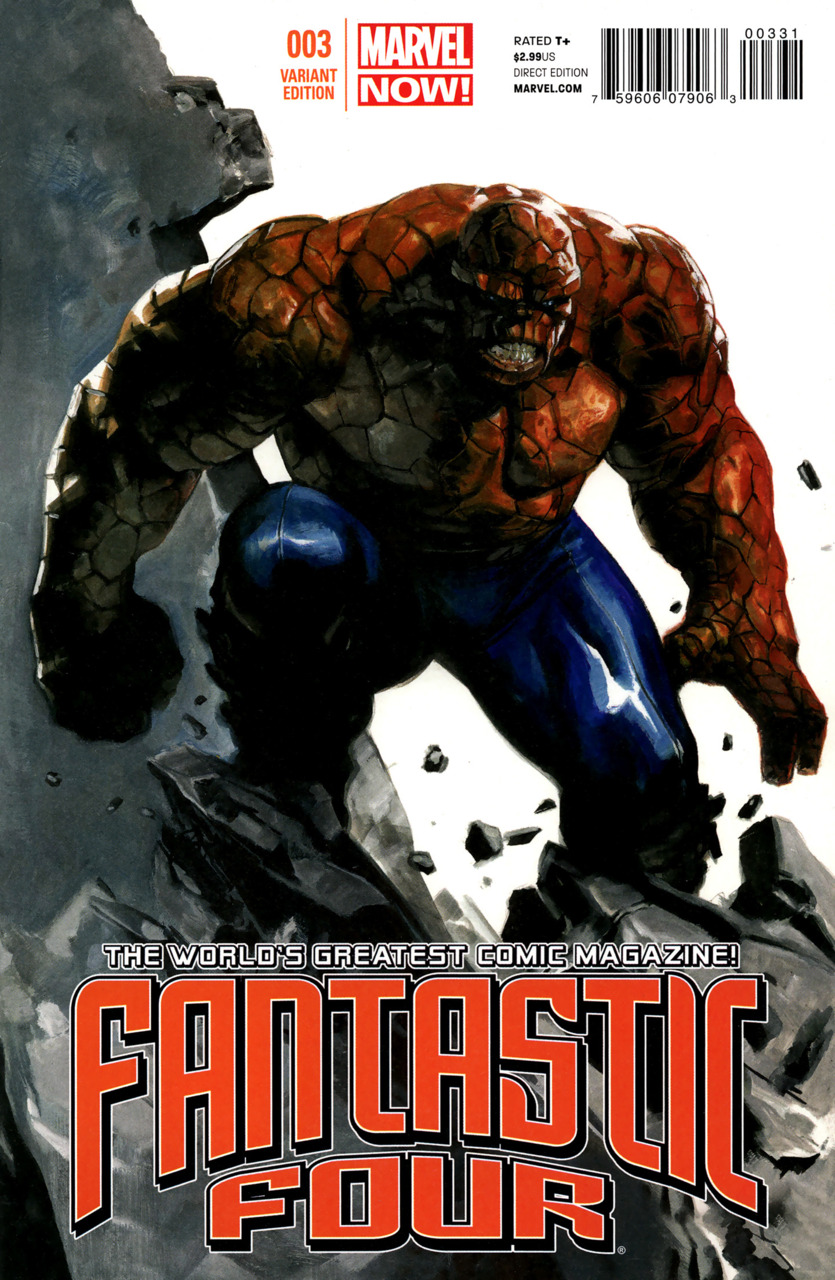