dragoness1993's Essential X-Men #15 - The Power of the Dark Avengers! review

The plot was set out very well, with Norman Osborn creating the Dark Avengers and Simon Trask's political group Humanity Now! causing riots in San Francisco. I loved the gripping story line and how many young mutants were effected by the riots. The line up of the Dark Avengers, with Moonstone as Ms Marvel, Daken as Wolverine and Mac Gargan as Venom was excellent. I thought the battle with Rogue and Ms Marvel was awesome and how Rogue managed to beat her in the end using Ares, the God of War's powers was great. I liked reading about how Rogue showed how caring she was when she helped Trance, whom had lost control of her powers and beat Ares. I enjoyed how Norman Osborn's team was trying to act like good guys when they were a group of Supervillains whom Norman had been using to obtain power. Emma Frost secretly working for Norman and making a speech about her plans in front of Cyclops and the X-Men was exciting and Emma getting her own team was thrilling.

In my opinion, the artwork was a bit off. There isn't much that is bad about this story other that what I have pointed out.

I think the artwork was very good and it created a nice feel to the story. It went well with what was happening although I did not like the way Hellion was drawn as I felt I wasn't 100% up to scratch. The rest of the artwork was great and I loved Rogue's new costume.

This story arc is worth picking up as it had a great story that would keep you on the edge of your seat. It is very dramatic and the artwork is not too bad. I would suggest reading it as it is packed with all the juicy goodness that you would expect from an X-Men story great fight sequences and great drama.

Other reviews for Essential X-Men #15 - The Power of the Dark Avengers! 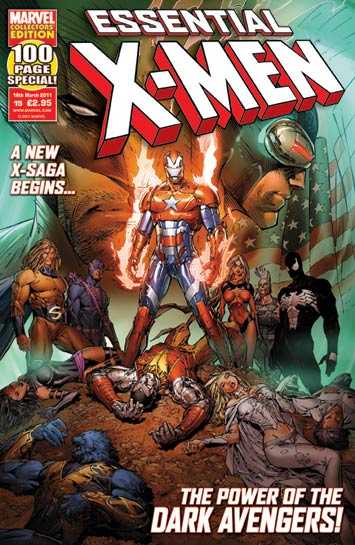