The master of magic, the (true) sorcerer supreme.... Doctor strange!   Strange is quite possibly one of the most powerful Humans in all of existence.  Unfortunately, Due to poor writing he hasn’t taken his rightful place as an A-list character. Anyway this is a thread to express your love of Doctor strange.

he performed open heart surgery on eternity
Stood up to the living tribunal and Forced him to overturn His decision to destroy earth
Battled and defeated the in-betweener
Eternity Said that Doctor strange Was The one man he could trust to be his avatar.
Galactus came to him for help, because he stated that strange was "The One mortal whom he had respect for"
Mind-raped Galactus
held off Adam warlock and the Infinity gauntlet.
Doctor doom came to strange for help retrieving his mothers Soul
Broke the enchantment keeping mjonjir with Thor (which would imply he had the power to Overcome Odin)

Some pictures i had in my images.

I cannot believe this thread is just barely being made. Marvel's premier magic user should have had one ages ago.

A demonstration of Strange's level of omniscience. He even sees events that occur in other dimensions, and here, for example, he detects and prevents an extra-dimensional invasion.

Passive, automatic-mystic shields. Here's a good example of one of Dr. Strange's passive magics. The Invisible Shield of Everlasting Enchantment provides Doc with heavy protection against both physical and mystical attacks. This isn't to be confused with the more volitional Shield of the Seraphim, Doc's most common go-to shield when he needs quick protection.

With the Shield of the Seraphim, he's unaffected by a blast from Galactus, which after being deflected, still had enough power to cause an earthquake in Manhattan.

Dr. Strange merges with Eternity, as he's done before.

Note: I got this group of scans from long_pig's excellent Dr.Strange Respect thread on the KMC Forums, but that's a 7-year old thread that's got alot of old, out-of-date scan links, so I figured it might be time to try to repost some of it, especially since CV still lacks a decent Strange feats thread, and maybe I can find scans to some of the broken links...here's the thread I'm talking about btw:

Here he stands around with a boge in his mouth looking cool as hell. 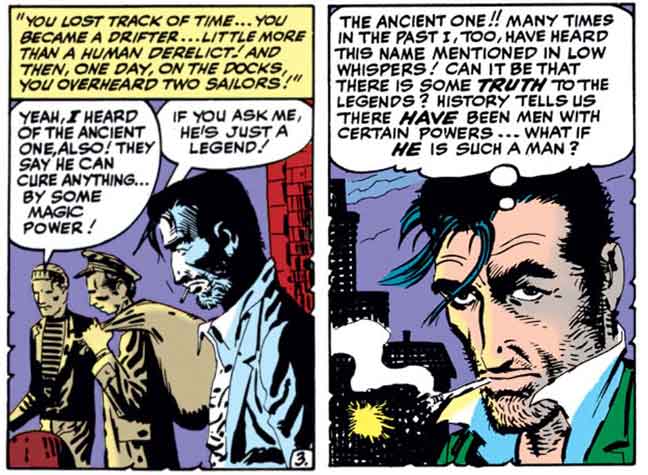 Breaks out of the Roving Rings of Raggador twice, first from his own reflected spell, then once again when it was cast by the Living Tribunal.

In a weakened state, manages to take out a dozen ice giants with only a minor spell.

Dr. Strange destroys a whole dimension after deeming it too horrible to be allowed to exist. (It's the universe on that face-stealing soul mask demon from the Eternity arc)

Just another time control feat. Strange pisses off Eternity again...here Eternity sicks a young version of the Ancient One on the Doc, who wins by simply aging the Ancient One until he was old enough to have met the Doc, then he remembers him and stops attacking.

Strange launches an energy attack that rivals the force of a supernova...no big deal.

Pre-Retconned Beyonder admits that Dr. Strange could have beaten him earlier when he was drunk, but chose not to...which I'd say pretty much eludes to a precognittion feat on the Doc's part. Beyonder also mentions how he's "far more, far greater than any in your multiverse suspect..."

Here, Thanos mentions how Dr. Strange can reverse the effects of the Time gem.

Trying to bone up before the movie. I read The Oath and Season 1 over the weekend. Really enjoyed them both.

Anyone has feats for current strange here with dark magic thing

This guy awesome I never knew