Perhaps The Worst Comic Ever Made

Let's talk about Paul Dini...Oh God. Yes indeed, for those who don't know I have a particular hatred for the untalented fatass known as Paul Dini. Not because he's a perverted, moronic hack...Though...That doesn't help. No, I hate Dini partly because of how much friggin love this guy gets. His best work is Gotham City Sirens and Batman TAS, and his worst work is...Pretty much everything else. His unfunny run of Harley and Ivy, Jingle Belle, Countdown To Final Crisis and his runs on Zattana/Wonder Woman. Don't believe me? Behold Stalked, exhibit #1 on why Paul Dini should never write Poison Ivy ever again.

The moronic story follows a mutated plant monster named Harvest who is stalking and hunting Poison Ivy. (And as unbelievably retarded as that sounds, the explanation is even worse) Batman and Robin decide to help out and stop the monster.

Where do I start? Paul Dini completely rapes Ivy, but like any media rapist, he seems to think he's doing the right thing. In Dini's new "vision" (And by "vision" I mean abomination of tripe), Ivy is no longer a ends-justify-the-means anti-villain/hero, but a sociopathic serial killer who feeds random innocent people (Some of whom are even nice to her, just go with it) to a plant that slowly digests them. Seeing how childish and immature Dini is, I am going to explain this as I would to a child: Dini, Ivy has been established as a character who is not evil and has plenty of good in her for a LONG time. She has raised abandoned children, saved tourists from a bunch of evil terrorists and even saved the world a few times. But screw that! Just put some face paint on her and call her The Joker! At least then Paul Dini can have his fantasy of Ivy x Harley that way!

Actually, am I the only one who realizes how overtly sexist this is? Think about it. One of the smartest, strongest, most free willed female DC Characters who has long been a symbol of female power and/or feminism is turned into a straight out sociopath who murders innocents (Not even plant destroyers, just innocents) in horrible ways for fun. Add to that the constant boobage, nudity and even that cover, and Stalked paints itself a very disturbing image. According to dumbass Dini, strong women are always evil and crazy, and what intelligence they have is used to commit senseless atrocities against mankind! Did I mention Dini is a dumbass?

The dialogue is equally terrible. Dialogue has never been a strength of Dini's, even in Batman TAS and Gotham City Sirens which are both fantastic, but here he seems to have completely lost it. After Ivy confesses to Batman about the murders in dialogue that is so out of character and childish that Rob Liefield would be disgusted (Although Michael seemed to be enjoying the dominance element. Until the enzymes hit the nervous system...Then he screamed!") calling it a "guilty pleasure" (Something that Ivy would never do unless written by a complete dumbass like Dini), Robin responds by saying "Cheescake is a guilty pleasure. That's just sick!" Right, because in the most twisted and terrifying moment of the book, we totally need comic relief! Then, Ivy intentionally tries to get Batman to kill her, or at least piss him off, which makes NO SENSE! WHY WOULD SHE DO THAT DINI?! SHE HAS NEVER ACTED LIKE THAT TO ANYONE BEFORE!!! IVY IS NOT JOKER, GROW UP AND LEARN ABOUT A LITTLE THING CALLED CHARACTER CONSISTENCY YOU...IDIOT!!

Stalked is stupid, insulting, unfunny, poorly written and the worst thing to happen to Ivy in her publication history. If there is any justice in the world, Linkara will bust it. If not, I strongly encourage Ivy fans (And comic fans in general) to simply deny it's existence.

Other reviews for Detective Comics #823 - Stalked 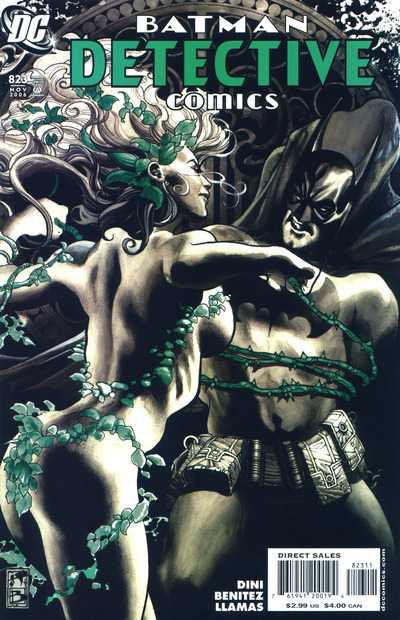