Carnado is not really a memorable stage name for a magician. Sounds more like a rejected Syfy film. "From the producers of Sharknado - just when you thought it was safe to take that weekend road trip - Carnado!" Houdini, Zatara, Abra Kadabra, those are all pretty cool magician names.

Carnado is a struggling magician forced to steal $100,000 at a time to pay mad genius Eivol Ekdal for the escape devices for his act. Apparently, he's not even a D-List magician. He's more like an F-List magician. Audiences are bored with him. So, he's forced into a life of crime. Following his latest robbery, he makes his payment at Ekdal's workshop. The latest device is the pinnacle of Ekdal's career and life! The Inescapable Doom-Trap! It is a device designed with no clear means of escape! The only way to discover a way out is to lure Batman into it and see how HE escapes from it.

It's a brilliant plan, and well executed. The solution is very smart. The counter-measure is cool, too. Ekdal could quite possibly be a formidable foe. He's much more devious, scheming and cunning than Carnado. Carnado seems almost sympathetic. If he weren't so much pathetic. He's a hapless, down-on-his luck stage magician. He's reaching for the brass ring... $100,000 a pop. If only he were a talented magician. For some unexplained reason, both are just a one-hit wonders.

This story is collected in Batman: The TV Stories. It was adapted into the ninth and tenth episodes of the Batman '66 live action series. Obviously, Eivol was the stronger of the pair. His character managed to easily transition from page to screen. Carnado, not so much. He underwent a gender swap and became Anne Baxter's Zelda the Great! Unfortunately, another one-hit wonder. Zelda would next appear on Batman: The Brave and the Bold; later digitally online and in the pages of the Batman '66 comic.

This story gets high marks for the deathtrap alone. It's a shame that the characters aren't more colorful or three-dimensional. The only thing memorable about this story is that it survives almost completely intact adapted for one of the early episodes of the live action series, and for changing the main character into the first, original, female Bat-villains!

This story earns four-stars for inspiration! 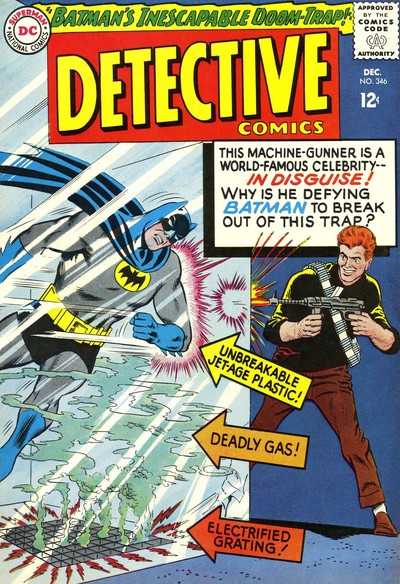