John Layman has taken the reigns of Detective Comics, and he has delivered three good issues. However, the last one left a little something to be desired with the “Death of the Family” cross over feeling extremely forced and undermining the strength of the original narrative. Furthermore, the lack of resolution between Ivy and Clayface was a bit irritating. Still, it was a pretty good issue, and I am eager to see what Layman has in store. I am a little cynical for just by viewing the cover I see that this issue continues the “Death of the Family” cross over event. I had hoped last issue would contain the only crossover, but it appears I have no such luck. Does this issue deliver a meaningful tie in that strengthens the issue, or does Joker's menace strain the fabric of the story?

In this issue, Ogilvy furthers his empire as Batman tries to deal with a new level of Joker threat.

The League of Smiles

This issue deals with the introduction of the League of Smiles, a group dedicated to worshiping Joker and creating crimes in his honor. I knew the League of Smiles were on their way due to solicitations, but for some reason, I had the impression that they would appear after “Death of the Family” concluded. Apparently I was wrong.

The League is an eccentric group who worship and mimic the methods of Joker. In some ways, this has been done most notably with the Jokerz in Batman Beyond, but unlike Batman Beyond's comical, cannon fodder, Joker imitating thugs, the League of Smiles seems to have some actual intellect and bloodlust. Adding to the intrigue of these killers is Batman's monologue which delivers and excellent examination of the psyche involved in a Joker worshipers head. Indirectly, it explains how Joker so often finds a group of people willing to fight and die for him despite his unpredictable and despicable nature.

There is also something larger at work with the League of Smiles as indicated by the final panel of the main story. I have no worthwhile predictions to make on the subject, but I do find the visual design quite interesting and distinct. I am interested to see how this develops.

Whatever Happened to the Emperor Penguin?

Whereas last issue felt like the continuing story of Ogilvy with a little forced Joker in the mix, this issue felt like it was almost completely about the League of Smiles with only a brief and somewhat mysterious reference to Emperor Penguin at the beginning of the issue. This came as a surprise to me after the last issue ended with such a clear Ogilvy focus. I would not have predicted that the Emperor would be given a backseat in this issue, but that is exactly what happens.

However, my Penguin expectations were somewhat met in the backup story, Pecking Order, where we see the Emperor rally the force of his Empire to compete for the upcoming gang war caused by Joker's murder of various mob families with the Penguin umbrella. All the gangs are out for Penguin's blood which means Ogilvy has an uphill battle to fight before he can claim his throne.

I enjoyed the action of Ogilvy in this issue, but I didn't care for his visual design. In addition to taking the Penguin's name, he also adopts his cigarette smoking, big coat wearing, monocle squinting aesthetics. I see no point in this nor does it seem particularly in character for Ogilvy. Perhaps I am misreading him, but Ogilvy looked to me like a character who secretly despised Penguin for all years, yet he immediately takes on Penguin's name and appearance? It doesn't feel right to me.

In addition to Emperor Penguin losing the spotlight, Batman kind of gets lost in the shuffle too. We here his thoughts through most of the issue, but the story focuses less on the actions of Batman and more on the actions of various criminals. It's not a bad story, but it just came off as unexpected when the previous three issues have been solidly focused on Batman and the Penguins.

The art team is really bringing its A game. I believe Fabok is on his way to becoming one of my favorite artists. Everything he does is simply good, and I noticed that he has a knack for faces in this issue. All characters look quite distinct which is not something that can be said for many artists. Cox does the colors for the main story, and he also does a great job. Colors pop right off the page, and they do a good job of setting the mood. Clarke does the art for the backup feature, and though I would not say it is quite as good as the main attraction, it is still very pretty work In both the main story and backup, there are panels which are quite grisly, and the art is strong enough to churn the appropriate gut reaction from readers.

Layman again proves that he has what it takes to write Batman. This issue does not blend too smoothly with the expectations set up last month, and I felt there was a bit too much happening this time around, but this is still a very fun issue. Anybody looking for a good Batman story should enjoy it. If you are considering purchasing this for the Death of the Family tie in, it may or may not be a good purchase depending what you want. Joker is not in this nor does it appear that he will be in the next issue, but it is a good story which explores the fallout of Joker's reappearance, so make your decision from there.

Other reviews for Detective Comics #16 - Nothing But Smiles; Pecking Order

Detective Comics #16 - Nothing But Smiles; Pecking Order by johnkmccubbin91 on January 13, 2013

Since John Layman, and Jason Fabok have taken over as creative team on this series it has been much better, and although it's not been quite perfect it hasn't been far off, with one of the issues comic very close.PlotThis issue shows Batman going round different parts of Gotham City, stopping groups that have been influenced by the return of the Joker. Whilst Batman is busy the most organized group the League of Smiles initiate their plans.The back-up story shows Ogilvy making his position as th...

Put On A Happy Face 0

Detective Comics #16 - Nothing But Smiles; Pecking Order by the_mighty_monarch on January 11, 2013

THIS is the issue I've been waiting for since Layman took over the series. It's not weighed down by any distractions or awkwardness, and there's a LOT set into motion. Layman also writes Batman's inner monologue brilliantly. He manages to weave a ton of excellent unexpected humor that fits Batman's style and doesn't take away from the darker serious tone.Unlike the rest of the Death of the Family tie-isn, this one isn't about any given Joker situation, it's about Gotham City in the midst of the ... 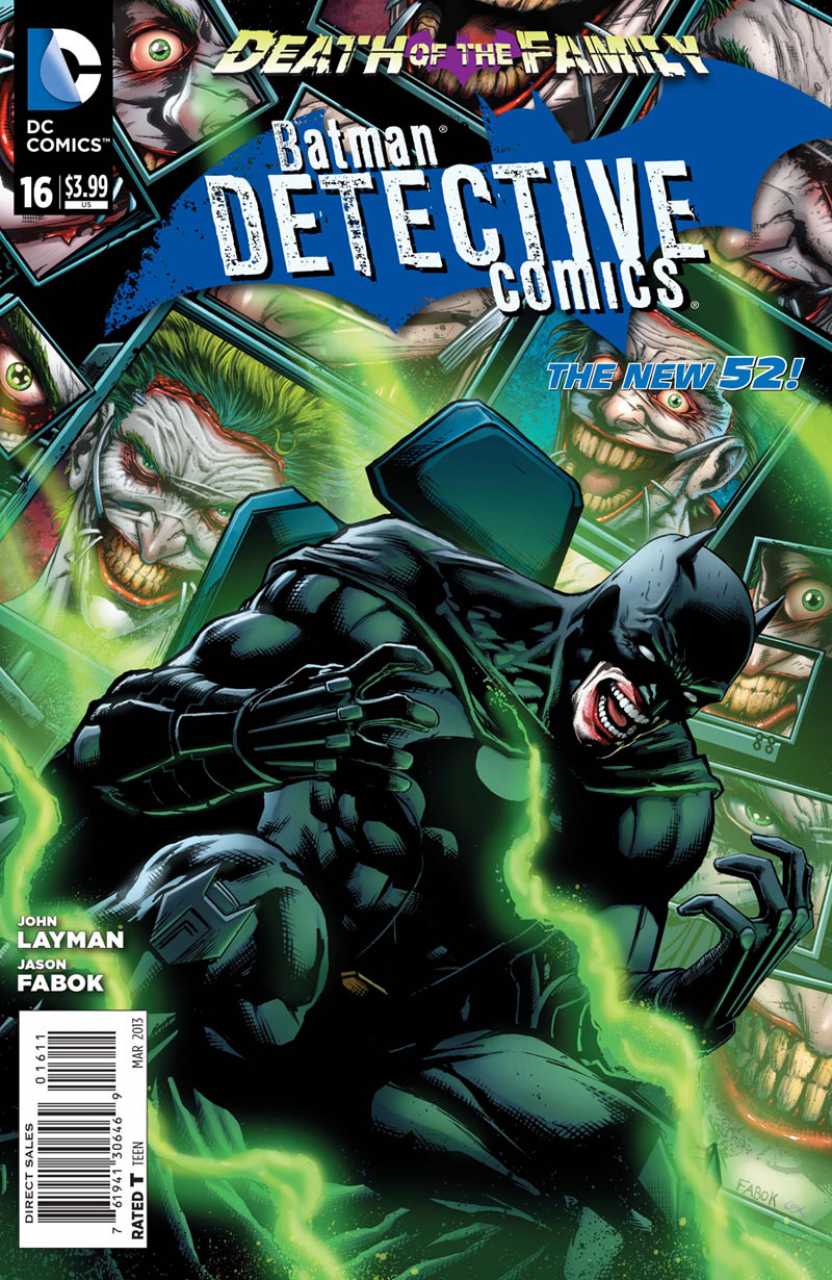 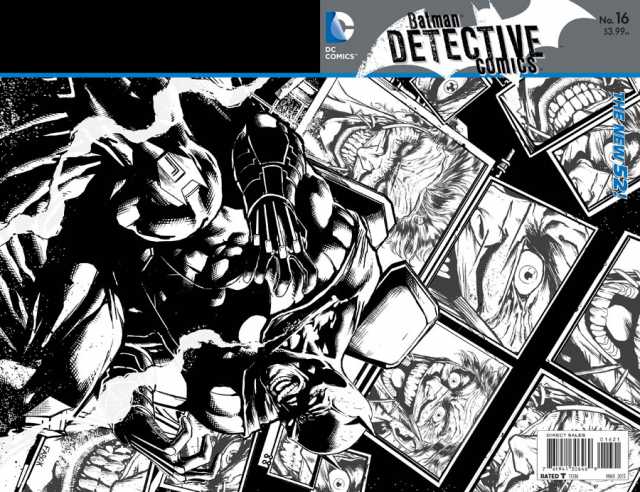 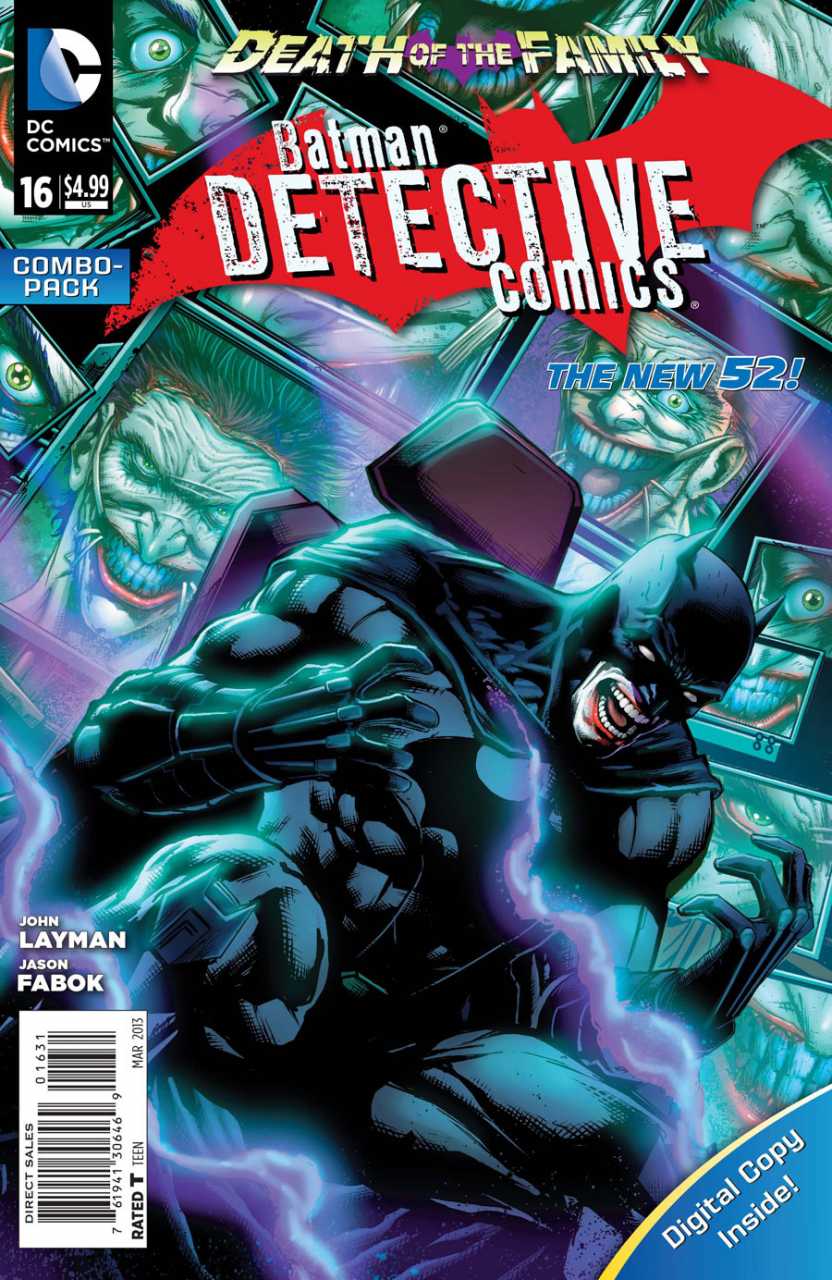