Even Deadpool Had a Montage

I have been really enjoying this series, and have loved each issue that has been out so far, and this series is looking to be the best Deadpool series ever. Brian Posehn and Gerry Duggan have done an excellent job of writitng this series, along with Tony Moore's fabulous artwork, and I hope it's as good as this for a long time.

This issue sees Deaddpool face many of the remaining undead presidents, including John F. Kennedy., Herbert Hoover, and more. It also sees Deadpool finally square off against Abraham Lincoln.

This was yet another fantastic addition to this brilliant new series of Deadpool, and my favorite so far. Posehn, and Duggan have really done something amazing in this series, as it's a brilliantly funny series, whilst also still having a very good story. This issue in particular was very funny in my opinion, and I loved all the jokes throughout, whereas with the previous issues there'd be at least one joke that I'd either not like, or that'd feel forced. I've also loved how Posehn, and Duggan's handled the mystic side of this story, as they've raised these zombie presidents, but they use them in a way that plays to Deadpool's strengths,and I honestly don't think this story would be as good with any other character.

The art in this issue was phenomenal, and Tony Moore continues to amaze me. I have never seen an artist do the artwork with this level of quality on a Deadpool magazine before, and it will take an extraordinary artist to do it again. His art is the thing I love all the time, and even if there is a small flaw in the story, Moore's art more than makes up for it, and is a reason in itself to get this series. I've never seen any artist draw Deadpool as graphically as this, with it still looking slightly realistic, but Moore has done this, which I'm very happy about. Moore also adds ton's of detail in his artwork and everything looks brilliant, whether it's Deadpool, the undead presidents, the supporting characters, or even the scenery, everything looks fantastic.

As I said earlier in my review, this issue has some brilliant comedy, and it opens with the best joke the series has seen so far. The issue starts with Deadpool dressed up as Marilyn Monroe, to lure in J.F.K. I thought this was hilarious, and that the dialogue was priceless. The funniest thing however was the way J.F.K. reacted, thinking that this was actually Marilyn, and that she'd let herself go over the years. The aftermath of this was also funny, with Deadpool, and Agent Preston arguing over whether the dress should get dry cleaned or not. Moore also drew this scene very well, as Deadpool looked a lot like Marilyn, whilst also clearly looking like himself.

There was also a big action sequence after this where Deadpool goes through most of the remaining undead presidents, in a montage style. I thought this was a very good sequence, mainly due to the artwork, as it looked epic, but at the same time it felt a bit rushed, and looked like it's sole purpose was to take out a bunch of undead presidents, so as it looks like Deadpool's actually done some work. If they wanted this effect they could have probably added a couple of lesser known presidents to each issue, so it doesn't look as forced, or rushed, but at the same time this issue was beyond brilliant before this small imperfection, whereas if added to any of the other issues it may have made them a lot worse. This sequence also had a few funny quips from Deadpool in it, and I also liked that it had the presidents were bunched into groups that consisted of presidents presiding, or following one another, in the order they were presidents (i.e. 11th, 2th, and 13th presidents).

The best thing about this issue however was the fight between Lincoln, and Deadpool. I've been looking forward to this ever since I first saw the cover for this issue, and whilst reading the issue I was starting to think that it was one of these issues you get with a miss-leading front cover. It wasn't however, and Lincoln, and Deadpool squared off inside a MMA cage. The fight itself was epic, and I couldn't of asked for anything better. Like he's done throughout this series, Moore has done something truly phenomenal in this sequence, and it's what makes this fight brilliant. Posehn, and Duggan also did a fabulous job of writing the fight, and added in some brilliant jokes for Deadpool to use, and although they may not be to everyone's taste I loved them.

A truly brilliant issue, and in my opinion the best in the series so far. It's a really funny issue, with some amazing action, and I'd highly recommend it to anyone, whether they're a Deadpool fan or not, as if you're not, this series will most likely turn you into one.

CAGE MATCH OF THE CENTURY: LIVE IN VEGAS 0

Deadpool #4 - The Quick and the Dead and the Really Dead by the_mighty_monarch on January 23, 2013

These Deadpool covers have been a consistent delight, ranging wildly in genre, but keeping a consistently hilarious tone. This one is no exception, I mean...... it's Deapool in a boxing ring punching out Abraham Lincoln. What more could you want?Deadpool is getting back into the swing of braking the fourth wall, but not in an overbearing sense. At first it appears he's just going for a subtle sense of providing entertainment to those who he secretly knows are reading his exploits, but then he tr...

Deadpool #4 - The Quick and the Dead and the Really Dead by drreneninja on January 23, 2013

***SPOILER FREE REVIEW***I flat out loved the first 3 issues of the current run of Deadpool, as the story has been wacky and filled with humor that I quite enjoy. Unfortunately, this issue suffers as writers Brian Posehn and Gerry Duggan have to push the metaphorical fast forward button to finish this plot arc by the next issue.We get alot of fun dialogue, similar to every issue of the current run and Deadpool. No doubt about it, Posehn and Duggan have a fun and zanny grasp on how to write Deadp... 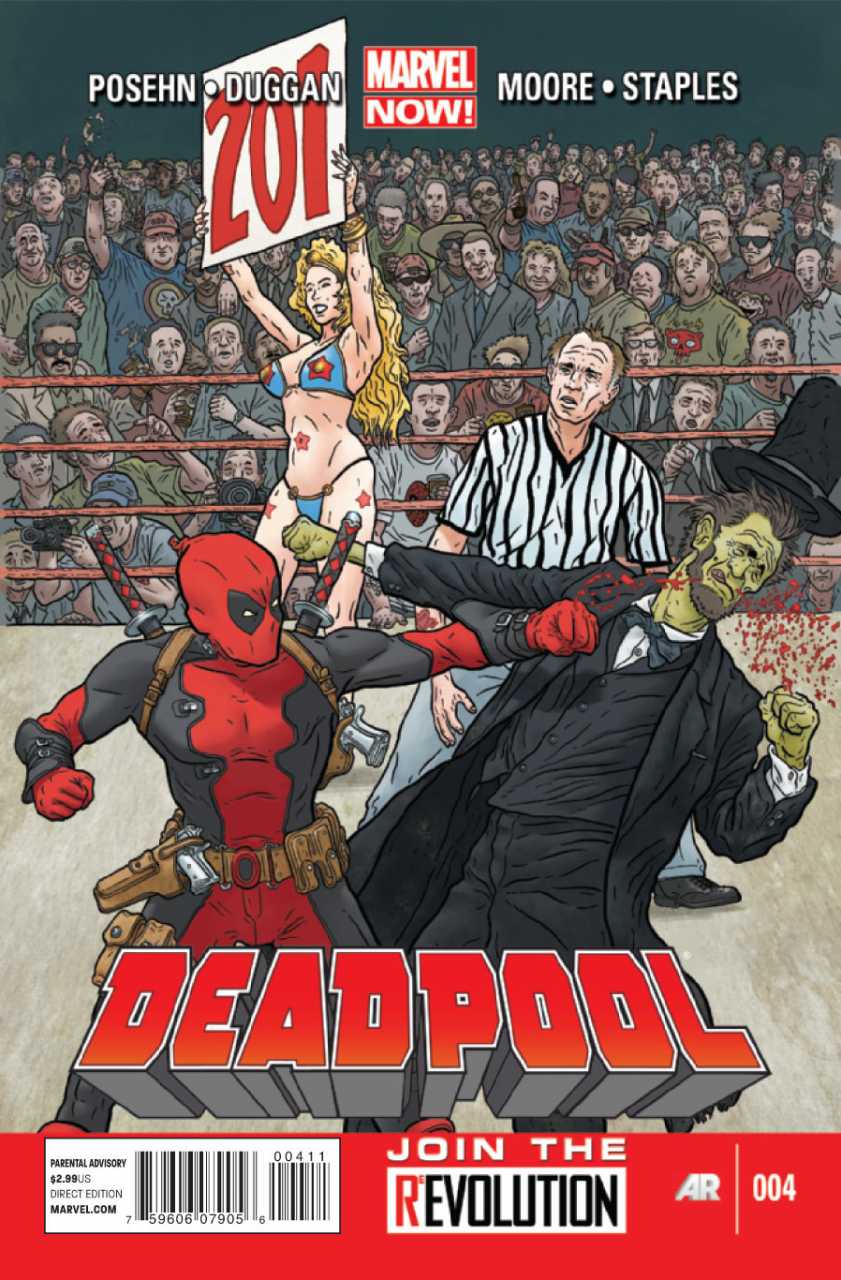 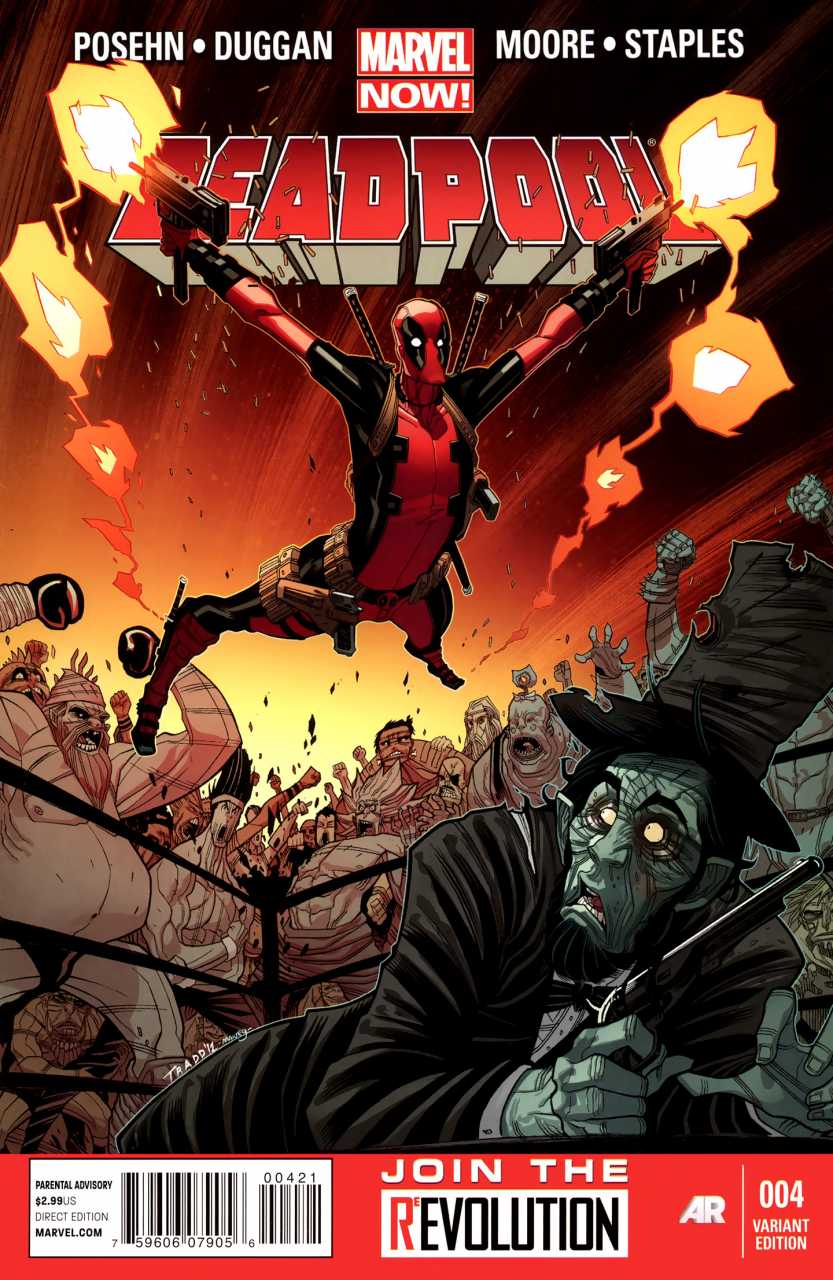