I loved the first issue of this series and I was very happy to see Deadpool get not just a good new series, but a great one. I have loved the character for a number of years now but I don't think I have read as good a start to a Deadpool story let alone series prior to this an Brian Posehn and Gerry Duggan have done an amazing job with the character.

This issue sees Deadpool still out for the count after being shot by Abraham Lincoln, and is dreaming about female superheroes including Invisible Woman, Emma Frost and She-Hulk fighting over his affection. He wakes to be greeted by the ghost of Benjamin Franklin who offers to help him with his undead presidents issue. After calling into S.H.I.E.L.D. Deadpool gets his next target, Theodore Roosevelt.

This issue was amazing, and this series is looking to be one of my favourite Marvel NOW! series, and easily the series with the most fun in it. I love Posehn and Duggan's writing throughout the first two issues of this series and I like the direction they are taking Wade. The biggest thing I like about how they write Deadpool is how they make him constantly funny, like he should be. It doesn't matter what he's doing, whether it's hallucinating about super heroines fighting over him or fighting a undead president he always finds time to make a joke. I also liked how this issue they took the humour down a slight notch to allow room to develop the story and add some scientific reasoning to the story.

The art is one of the things I have loved most about the first two issues and Tony Moore continues to do an brilliant job. I love how underneath the mask Moore really shows how bad Wade's face is showing all the burns, and dead skin. I also love how he draws the action sequences in this issue which are awesome and show Deadpool at his best. The way he draws the undead presidents is also amazing and I love how he's turned some of the most iconic men in American history into zombies. I also love how Moore continues to give ton's of gore in his art and I like the detail shown when parts of Deadpool's intestines or other internal organs are hanging out. My personal favourite image in this issue was Deadpool talking to the Meerkat's and copying the way they stand (pictured right). I know that some of the other images throughout this issue are a lot better art wise but Deadpool copying the way the Meerkat's stand was hilarious (or at least I thought so).

I loved the introduction of Benjamin Franklin to this story as it's nice to see someone who is as famous as famous in politics as most former presidents that's on Deadpool's side. I also like how Franklin makes the story a little more serious, and how he mentions a scientific theory about how to stop the undead presidents. It's also nice to see that although Franklin adds an intelligent character to help Deadpool, but that he has a goofy side to him and doesn't mind having a laugh. It also leaves the question, is Franklin real or just a figment of Deadpool's insane imagination as Deadpool is the only one that can see him. I wouldn't be surprised if Deadpool was just imagining him but if he is I don't know how Deadpool would know smart things to make him say.

The fight between Deadpool and Roosevelt in this issue was brilliant and I loved how Roosevelt didn't seem to care what the other undead presidents were up to and just wanted to go hunting. I also liked how Roosevelt was very calm when Deadpool first approached him, simply wondering if he was here to hunt too, and I loved how this calmness turned into furious anger after Deadpool shot him in the head. I also liked how cause of the fight happening in a zoo, how animals like a Elephant and Gorilla were involved before and during the fight. I especially liked seeing Roosevelt punching a Gorilla, and if it wasn't for the fact that he was a zombie I would be questioning how that was even possible.

The way this issue ended was also brilliant and although I won't spoil it I will say that Deadpool along with the ghost of Franklin, and S.H.I.E.L.D. Agent Prescott go and ask for someone's help, and that it will be interesting to see how this transpires in the next issue.

A brilliant issue and I extremely hope that the quality this series has been continues for a long time. I would highly recommend this issue and the series so far to both new and old Deadpool fans as you are bound to find something to enjoy about this series.

Other reviews for Deadpool #2 - We Fought a Zoo

Just like the first issue, this one has a spectacularly definitive 'Deadpoll' cover. The lack of a background actually works very well, and everything is very well balanced out. And the elephant with the gun in his trunk is the icing on the cake. And right after the cover we get perhaps the best 'previous issue recaps' I've ever seen. It's so funny.This issue is a lot better than the first one, and I actually definitely really enjoyed the first issue. What was missing from the first issue was a ...

I was one of the five people on Earth that liked Daniel Way's take on Deadpool. I am a huge fan of Brian Posehn from his stand up (and anyone from Mr Show gets a free pass). I was excited for this series. The first issue was good not great. Not all of the jokes hit, and I missed the inner monologue.Well I'm going to chalk that up to Posehn and Gerry Duggan getting comfortable in this universe. Because the second issue was awesome.I loved the cemetery scenes with Washington and Kennedy, the fact ... 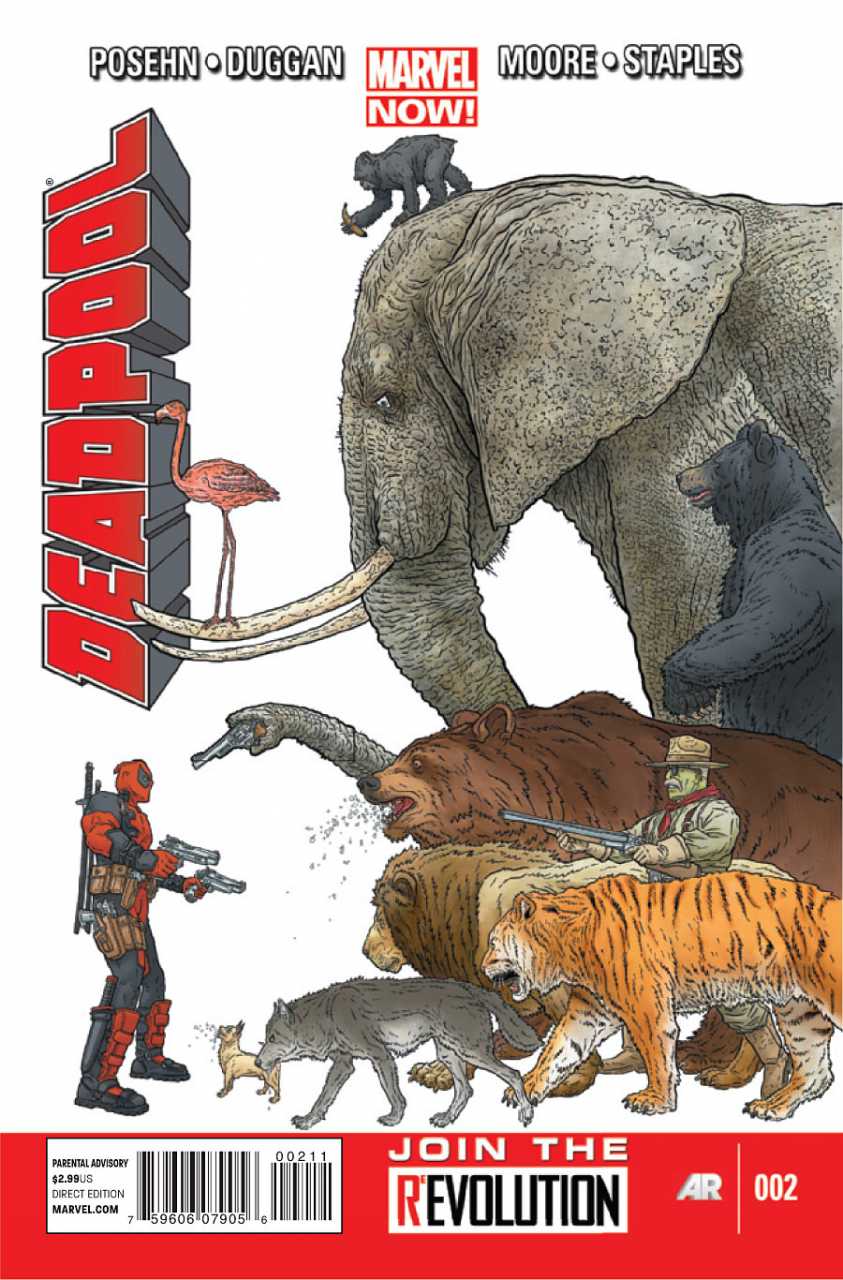 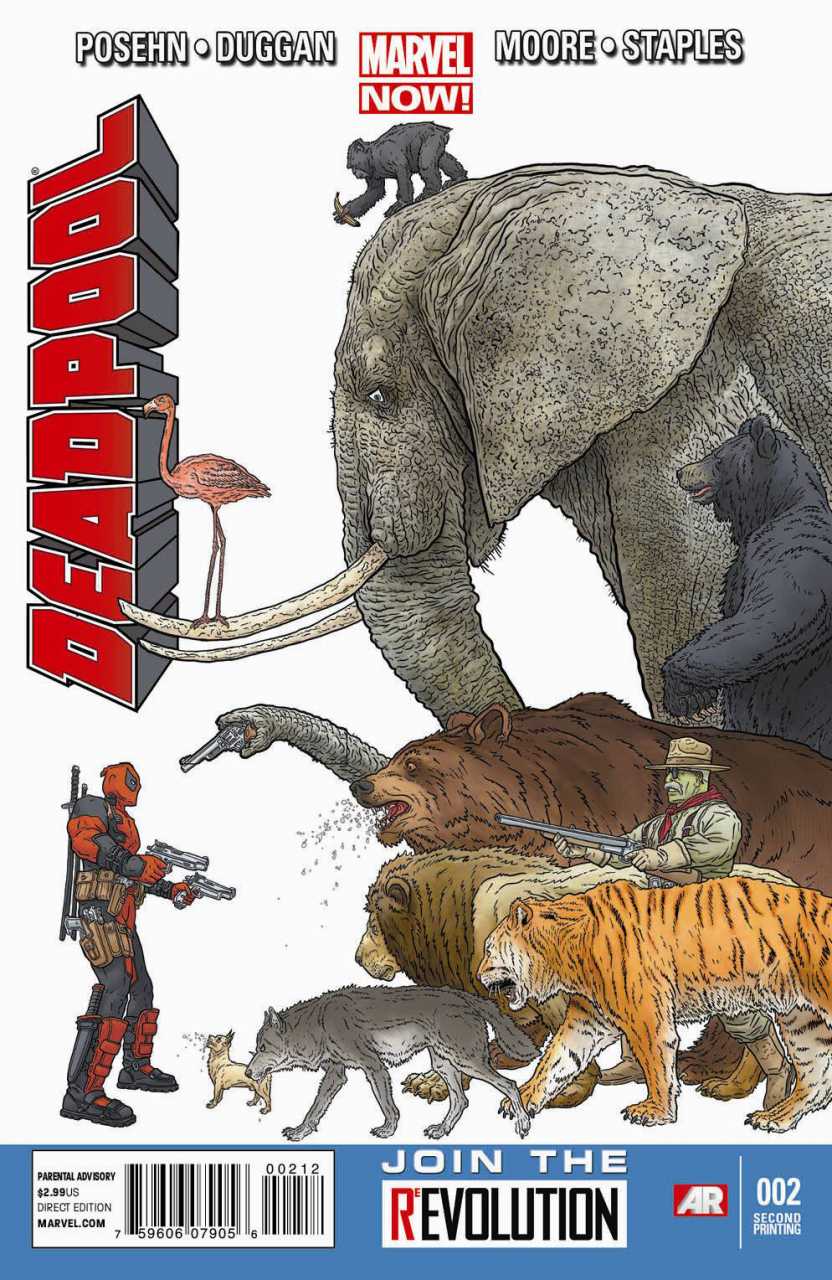 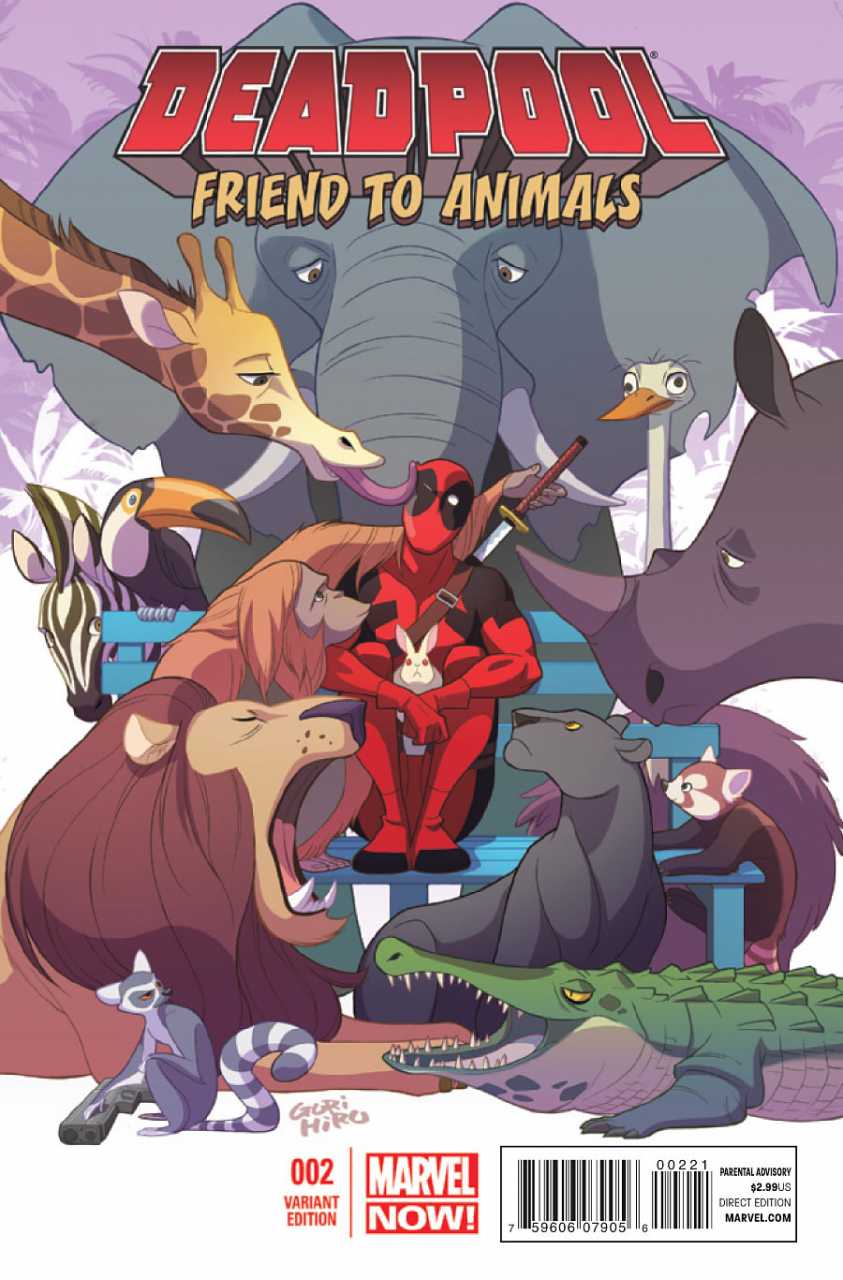