The Super Star Holiday Special was an interesting idea: feature some of DC's most popular characters in a single holiday-themed anthology. While the results are fairly average, it's worth a look for the unifying holiday theme. All the stories center around a star that appears on Christmas night; presumably the Star of Bethlehem from the Biblical tale about the birth of Jesus.

The first story, and perhaps tied (with "The Longest Night" below) for best of the bunch, from both the writing and art standpoint is "The Fawn and the Star". Set in the old West, Jonah Hex is on the trail of a pair of wanted men when he comes across a young girl pleading with her father not to shoot a baby deer with a broken leg. Hex intervenes and helps splint the fawn's leg, but the father makes him promise to bring a replacement Christmas dinner or he'll shoot the deer anyway. It's a touching story, simple yet effective.

The second story is the most famous in the anthology. "Wanted: Santa Claus -- Dead or Alive!" is primarily known as an early example of Frank Miller's artwork. Honestly, it is some of the best artwork in the comic, but its unevenness makes it second to "The Fawn and the Star" in the art department. Some of the action isn't as fluid as it ought to be and there seems to be a slight disconnect between the writing and art towards the end where the final scene is a little confusing as to where the characters are relative to each other, and who at least one of the characters who speaks to Batman is. Nevertheless, it's nice to see a story where Batman is after a "standard" criminal - a burglar that uses his job as a department store Santa to case the joint - rather than yet another supervillain. For these reasons, it's probably the second best story in the book.

Next Comes a story for the House of Mystery comic, which itself is an anthology series. This is where the concept gets stretched too-thin as the story is an anthology within an anthology, a plug not only for the House of Mystery, but also for The Witching Hour, and Secrets of Haunted House. The storytelling contest between Cain and Abel, The Three Witches, and Destiny, with cameos by The Phantom Stranger and Madame Xanadu, becomes so crowded with characters that it becomes stifling and unsatisfying. But it's still better than the Legion of Super Heroes story - more on that in a moment.

"The Longest Night" is about Sgt. Rock and Easy Company liberating an occupied Italian town on Christmas. It's close to the Jonah Hex story in terms of quality in both the art and story department, and rivals "The Fawn and the Star" for best story in the comic. It's a great war genre story, and like "Fawn" it feels less contrived than the other stories in the comic.

Finally, the comic closes out with "Star Light, Star Bright... Farthest Star I see Tonight!", easily the weakest story here. The Legion of Super Heroes has always had trouble showcasing all its stars, so it's no surprise that a short story featuring all of them suffers from the too-many-cooks syndrome, even though it gets the most pages out of the book. The story involves Superboy and The Legion of Super Heroes going on a quest to find the Star of Bethlehem, but instead finding an alien world whose inhabitants are suffering from the onset of an ice age. The story is pretty trite when it comes down to it.

Overall it's impressive how non-denominational leaning the comic actually is. You'll note that the title is "Holiday Special" not "Christmas Special", and though it leans heavily toward Christmas, there's mention of Hanukkah, and other winter holidays, and no direct mention of Jesus or The Bible, and frankly the comic is better for it.

Given there are so few Christmas themed comics out there, it's worth picking up for that reason alone - even if the stories are a bit run-of-the-mill. 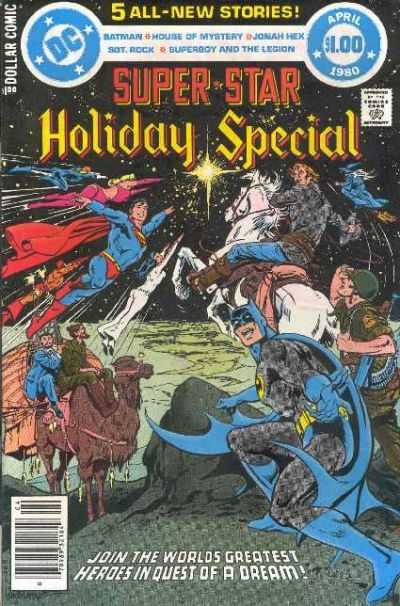