dmstarz's Daredevil #28 - Thou Shalt Not Covet Thy Neighbor's Planet! review

Karen's feeling bummed about Matt at the beginning of this issue.  Whilst she looks forlornly out of the window of Nelson & Murdock, annoying Mike Murdock sits cross legged on her desk behind, juggling.  Mike tells Karen that Matt's away giving a lecture at some university so he won't be around.  I'm kind of hoping that Stan has a big bus waiting for Mike for him to step out in front of...  No, wait. He's Matt, right?  Sheesh.  I'm like Foggy and Karen now, getting confused about who Matt is and isn't.  Karen, meanwhile, remains transfixed by the hippest character in comics, so much so that on page two she leans hard on what looks like a very precariously balanced drawer in a filing cabinet.  Careful now!  Health & safety at work, Karen.

Inexplicably, Foggy (or Chubbins as Mike calls him) is dating Karen.  He's pulling out the uber romantic stops, taking her for a ride on a horse and carriage.  But the poor guy can't win - Karen still can't stop going on about Mike and Matt.  Here, Karen even wonders out loud if Matt can be... But no, he can't be Daredevi.  He's blind after all, she figures.  But she's getting awfully suspicious.  That reminds me.  Matt was going to reveal all to Karen a few issues back.  Guess that's on the back burner now that nutty Mike's on the scene.  Daredevil, eavesdropping, jumps onboard the cab, acting like Mike to try to fool all and sundry, but Karen, in a gorgeous panel drawn by Gene Colan, looks unconvinced, confused now about what's being going on all along.  Some nice story-telling early on this issue.

Which is just as well as things are about to get waaay corny.  Matt, a lawyer remember, has been invited to give a lecture at Carter College.  What on exactly?  The fine art of defense lawyer?  Who to go to for a good claim?  What to do when you find out your building manager is a big bad guy?  No.  Flying saucers.  That's right.  Flying saucers.  So there's a new interest we didn't know Matt had.  To be fair, Matt's not the only speaker and he's dealing with the legal ramifications of aliens landing on our planet and their rights.  Matt tells his keen audience (partially made up of female students who swooned when they caught sight of him in the university grounds) that they must not discriminate on the basis of race, creed or colour (hurrah!) but then adds what planet they're from too.  Interesting summation of human rights, there, Matt.  But since when were human rights extended to the alien population?  The Skrulls should get his number, due to the disgraceful lack of cultural and religious respect shown to them by humans in their recent attempts to migrate.

The topic of flying saucers is particularly big news at Carter because a professor named Brewster has claimed to have seen one.  As the story progresses, Brewster bumps into an alien who tells him the human race is doomed.  Which isn't very nice.  Daredevil later goes after them and whilst they're green, let's give credit to Colan, he's given them a very distinctive look.  They're quite lizard-y in a way, with scales and claws but have very peculiar lower jaws and a half halo around the forehead.  Their space craft is somewhat less original - basically your common and garden flying saucer.  I must confess to be less than thrilled about Daredevil, who's all about getting down and dirty with lowlifes, fighting weird looking earth destroying bug eyed monsters and being abducted into space.

The aliens are all about plundering earth's resources - they actually aren't interested in conquering our backward, puny little planet.  However, they do like plucky Matt.  They offer Daredevil a deal.  Come with us and we'll restore your eyesight.  Will Matt be tempted?  Is he heck.  A couple of snowballs later ( no, seriously, Matt ties things up by throwing a few snowballs) and the aliens are thwarted.

There's a very peculiar panel near the end of this issue.  The aliens have set their sight stealing ray off across the earth and Colan draws a mixture of different people from different cultures suffering sudden blindness.  This isn't particularly odd in itself.  It's the letterer who distinguishes himself here - writing odd types of script for each character.  Hence the Russian has an oppressed Soviet style lettering, complaining about capitalists (though hilariously spells capitalists with a 'k'), an Indian on an elephant fears that Muhammad has abandoned him and so on.  It's quite strange.

And a great final panel.  Foggy and Karen have been racing to reach Matt.  Once there, Foggy starts blah- blahing but is anyone listening.  No.  Instead Karen and Matt hug, both intensely relieved.  "I might as well talk to the wall," Foggy huffs.

Despite a very unpromising storyline, this is a surprisingly fun read.

Other reviews for Daredevil #28 - Thou Shalt Not Covet Thy Neighbor's Planet! 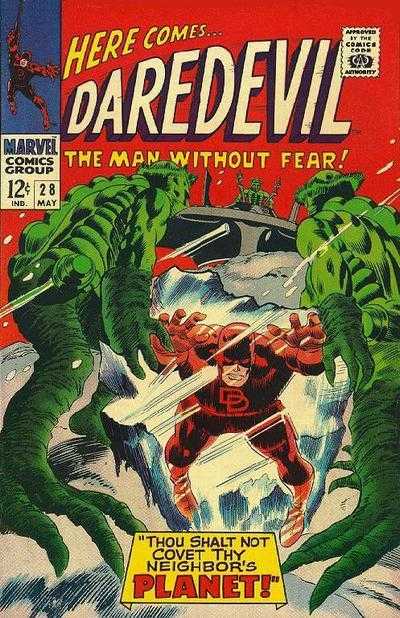