Welcome ComicVine to the second installment of Project 500. Project 500 came as an idea from reviewer Silkcuts as a Jam session style review where a few users come together to write a series of reviews. The first review for Crisis on Infinite Earths #1 was a jam session, while the reviews for the other issues of Crisis on Infinite Earths will be handed off baton-style from reviewer to reviewer.

First off, thanks to Silkcuts for starting off this project! I just knew he had something special planned for Review #500, and this is an awesome idea.

*grabs the baton from SilkCuts*

Now, onto the Crisis of Infinite Earths. While I hate to date myself, I have to give some backstory here. First off, I love Silver Age DC. Call me crazy, but there is just something I find amazing about it. You've got everything from super-heroes like Superman to World War II heroes like Sgt. Rock to caveman comedy like Anthro.

I started reading DC with Justice League of America #190. Just take a look at that cover. Beautiful artwork by George Perez? Check. The Super-Friends I used to watch on TV? Check. A Giant purple starfish using other smaller starfish to control those heroes? Wow, how insane! I was hooked, and found myself loving the Justice League.

So, naturally, the Crisis on Infinite Earths rocked my world. Keep in mind that, back in 1985, DC never really did world-rocking events. That was left for Marvel, who was already known for killing off Jean Grey. To find a series where major characters stood side by side with minor characters, and where it was the major characters that were killed off... well, that was just something you didn't see at DC. And, as much as I loved some of those heroes, I didn't mind their deaths, because you felt like it was done to save whole worlds, not because DC wanted to "thin out" some of the smaller heroes.

Issue #2 continues with Perez's beautiful artwork. In the review for Issue #1, grifter78 mentioned Perez's dynamic artwork, and more of it is on display here. Check out the first spread: here we have a team of heroes assembled by the Monitor to stop the time distortions. Perez's use of a spread is one of the earliest in the comics' industry, and immediately calls attention to what are the big names in this story. Throughout the book, Perez's attention to detail is always there, and it's obvious he enjoys throwing in a ton of heroes into one panel. He even pulls off some good homages. Check out this pic of one of the "cosmic tuning forks" in Kamandi's world. While it's Perez's artwork, it's so reminiscent of Kamandi's creator, Jack Kirby, that it's almost scary.

As for the story, well, it definitely won't suit everyone. Hardcore DC fans will love it, with the inclusion of more obscure heroes like Arion, Kamandi, Anthro, or Solovar. But the normal comics reader may be confused when being hit with 15 heroes up front, especially when the two most popular of them (Superman and Green Lantern) don't look like the ones they're familiar with. Plus, the two time periods focused on here (Kamandi's Earth after the Great Disaster and Arion's ancient Atlantis) aren't the most popular of time periods in the DC Universe. Still, the notion of heroes being hand-picked amongst multiple Earths and sent into different time periods holds some appeal, and the subplot with Batman and the Flash sets up some powerful scenes for later issues.

SPOILER WARNING: Click here to reveal hidden content.
Common comics readers would find better appeal in the Flash/Batman and Batman/Superman dynamic. While these 15 heroes are out saving all of time, the big 3 (Superman, Batman, and Wonder Woman) have no clue what is going on. I kinda like that. All throughout the issue, things happen (like when Pariah tries to clue them in), and they just look confused. Plus, check out Perez's artwork when Batman watches his friend crumble before his eyes. Now, the current incarnation of Batman wouldn't care... but back then, these guys all went out for dinner together when they weren't on monitor duty.

Right now, the action is still slowly building, and the action that is there involves characters most readers probably haven't even heard of. But still, for those that like a slow build, it pays off in the end.

Note that this is definitely with rose-colored glasses fit snugly on my nose.

*prepares the baton for the next reviewer*
Load Comments

Welcome ComicVine to this the third installment of Project 500. As we all know Project 500 was the idea of legendary reviewer Silkcuts for a series of Jam session style reviews where users come together to write a series of them. The first review for Crisis on Infinite Earths #1 was a jam session, while the reviews for the other issues of Crisis on Infinite Earths will be handed off baton-style from reviewer to reviewer...   This is my first review so please bear ... 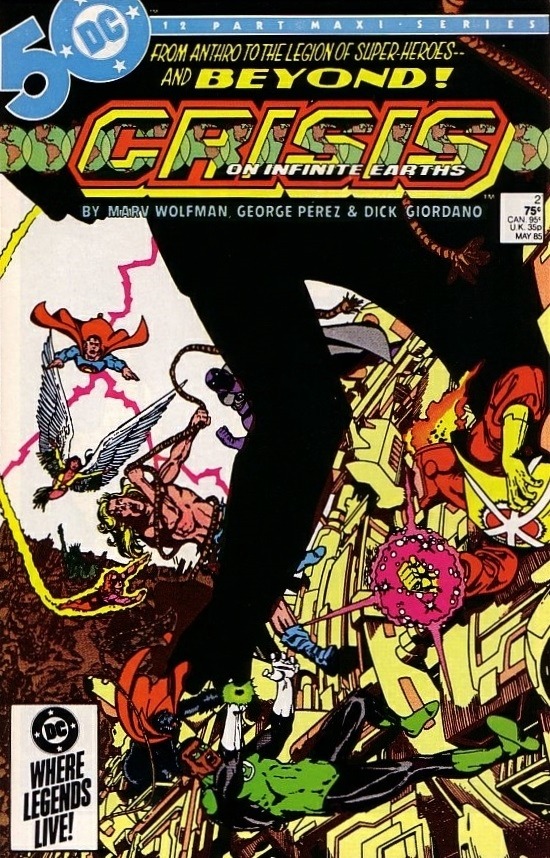