Where did this issue go?

Borrowed this issue from someone I know. Reading it made me glade I decided to wait to see how it ends. The decisions of several characters in this issue just don't make a lick of sense no matter how I look at it.

By this point Cho has calculated Mikaboshi has absorbed close to 99% of the multiverse, getting more powerful by the moment, scattered the God Squad, out powered Hercules, won at every encounter, and by every calculation of his hypermind concluded Mikaboshi is unbeatable. He thinks it is time to look for alternative strategies.

Hercules's take on this? "Let's punch him?!" Okay, I get Hercules at times can be slow on the uptake. I get he gets emotional. I get he is used to punching things. But he showed a greater understanding and need for intelligence back in the "Sacred Invasion" arc. At this point he is just being stupid beyond even his level. Even finally calls him out on this and gives up on him.

Athena was an even bigger disappointment. I really, really, really hope Pak and Lente have something else in mind. If Athena's actions here were what she intended all along than as the goddess of wisdom she is even dumber than Hercules. Aside from her heel face turn coming out of nowhere and being cliche Mikaboshi's actions are predictable to pretty much anyone.

The rest is just pretty much setup for the last issue. Cho and Galactus decide to retreat to Hera's universe with what survivors they can since for the moment it is something Mikaboshi will not absorb or even notice. Things do not go as planned. Hercules is finally forced to realize he has no choice but to change, but Gaea's faith in him comes across as desperation. Hercules gets another power-up that is supposed to enable him to win I guess.

Overall, this series just isn't doing it for me. Of a five issue series it feels like three are setup. The first two to assemble a team and this one for the end. Hercules gets one power-up after another thanks to other characters expecting him to some how save them. Why do they expect so much of him? I honestly don't know. Because he is the main character? The series has jumped around so much it feels like it never knew where it was going to go. Pak and Lente had a vague idea and that was about it.

Based on this issue if I were to guess how this story ends it would be along the lines of Mikaboshi wins, but Hercules recreates the universe exactly the way it was before. A big reset has to be coming.

What is Mikaboshi? How did he end up with the Kami? Why are Earth's gods so important? Why is Gaea the fountainhead of creation for the entire multiverse? Is Earth's importance only due to Mikaboshi being trapped by Earth's mythology? Why not some other group of gods or planet? Good questions. So far no answers.

Its not all bad. There are some good moments here and there. The randomness might have been a point. But it just feels like set-up on top of setup with things just happening because they must.

Hercules battles his sister, Athena, the latest servant of the Chaos King, while the waves of entropy fell Amadeus Cho, Thor and even Galactus.  The Good As I've said before, this has been one of the most character-driven crossovers I've encountered and I really appreciate the specifics of Herc's personality. He's got this indomitable can-do attitude that never accepts defeat because he, quite literally, can't understand it. His pep talk with the other gods in the pit had this great quality of a...

I´m a big fan of Greg Pak and Fred Van Lente, and I must congratulate them for building up a crossover with not so much interesting characters, like Hercules, Amadeus Cho and this Japanese God of Entropy that most of us havent´s heard of before. But, unfortunally there is a but after this sentence: I guess the stakes were to high and they only had a pair of kings against a Full House (Aces full of Kings). This issue there is a lot of dialogue and yet the whole universe (what´s left of them) is f... 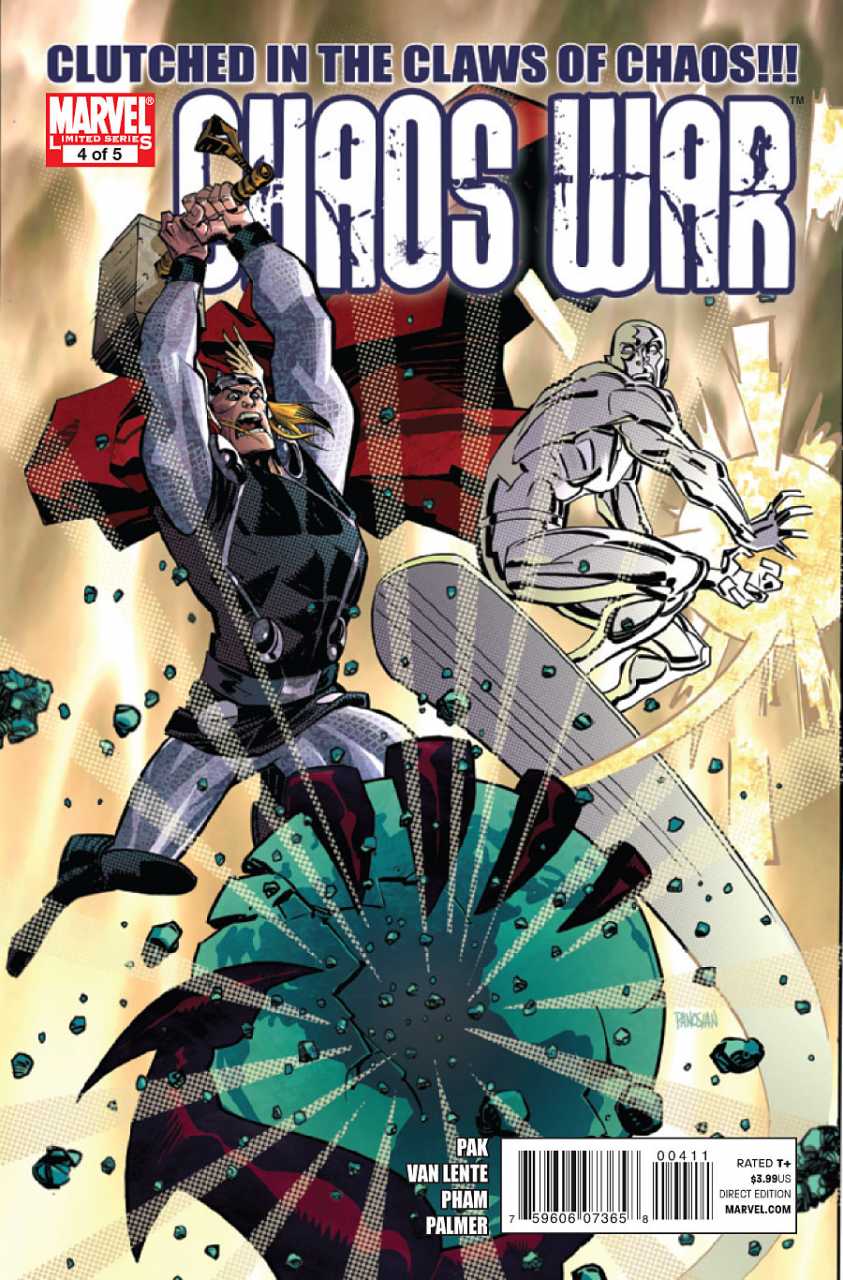